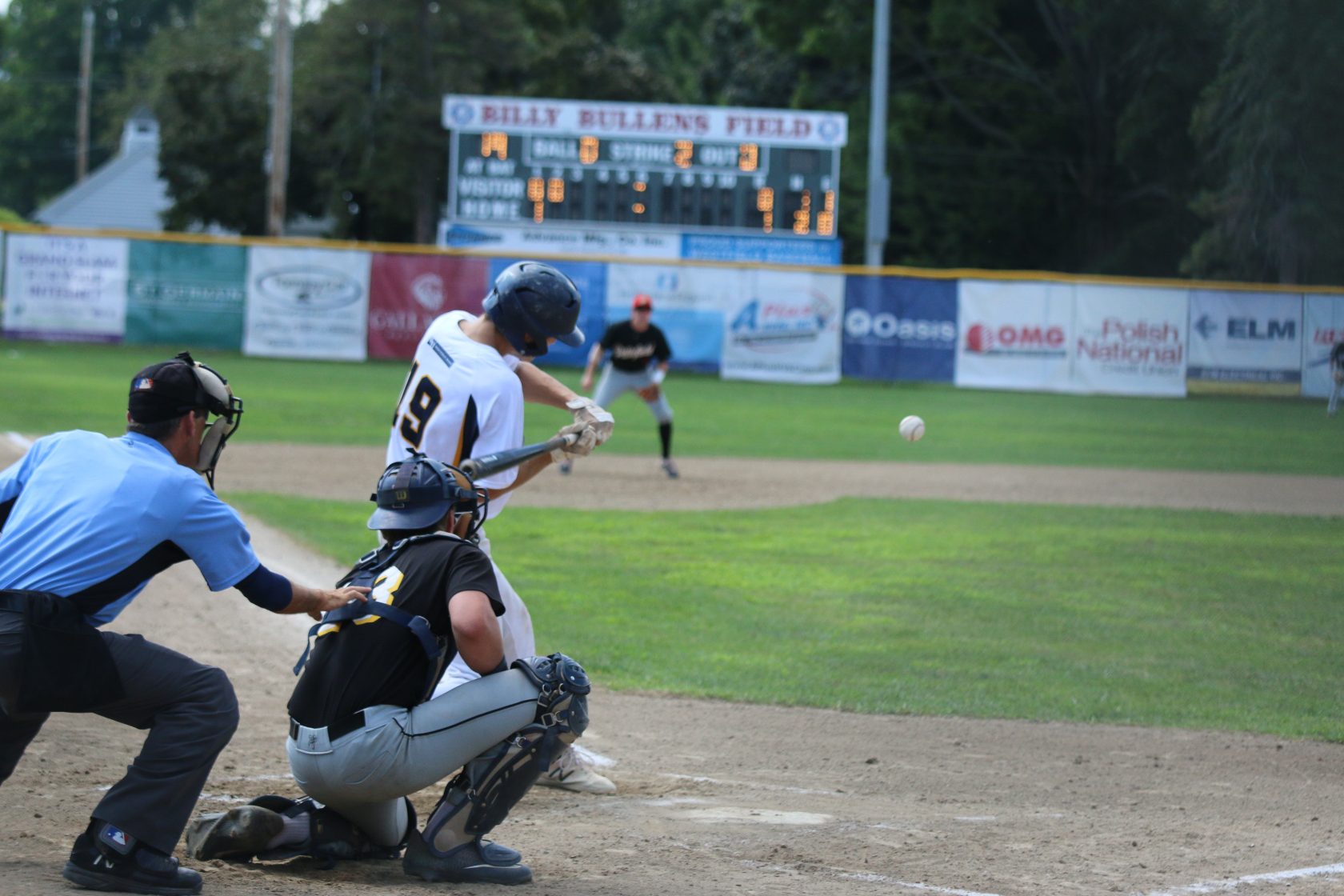 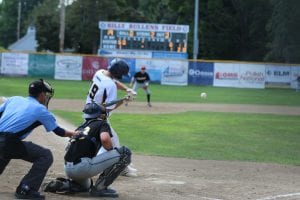 Westfield Starfires’ Dolan Ocasal (19) hits the ball to get on first during Monday’s double header against the Pittsfield Suns at Bullens Field. (Photo by Kellie Adam)

WESTFIELD – Monday’s double header at Bullens Field between the Westfield Starfires and the Pittsfield Suns resulted in a split decision for the home team. The Starfires won the first game 5-1, but fell 14-5 to the Suns in the nightcap.
Westfield pitcher Jack Fox had an incredible outing in the first game, throwing nine strikeouts in six innings. As of Monday afternoon, Fox also made Futures League history, breaking the all-time league record for strikeouts in a single season with 74.
Fox’s impressive pitching was highlighted in the fourth inning as he made quick work of the Suns, retiring three batters on three strikeouts. The California native said that his method to staying in the game mentally was keeping things simple.
“I just tried to stay focussed and trust my pitches,” Fox said. “I think about keeping my mechanics under control and trusting my body.”
Westfield had 10 hits in the seven-inning contest, with Andrew Ciacciarelli and Thomas Joyce earning two apiece. Newcomer Pat Galvin picked up his first hit of the season in his third game as a Starfire.
Pittsfield scored its only run of the game in the sixth inning and was unable to add to the scoreboard thanks to standout pitching and batting on the part of the Starfires.
The tables turned for Westfield in the second matchup of the day as the Suns shut the Starfires down early, scoring nine runs in the first two innings.
Seven hits were logged for Pittsfield in the second inning alone, with 12 hits in the game as a whole. Seven runs scored in the inning as well, a sizable deficit for Westfield to come back from.
Westfield was able to put themselves on the scoreboard in the third inning when Joyce crushed a ball over the outfield fence for a three-run home run to lessen the Pittsfield lead, marking his fourth homer of the season. Joyce currently leads the Futures league in batting average at .370 with 50 hits in 42 games.
Another home run came for the Starfires in the fourth inning when Pat Galvin stepped up to the plate, a solo shot that he made look easy. Westfield’s final run of the game was scored at the end of the fourth when Danny Crossen hit a single to send Mike Chaves across the plate.
Pittsfield’s big lead held through the entire matchup as they prevailed victorious with a score of 14–5.
Westfield will play four more games at Bullens Field, including a double header on Thursday, which will mark the team’s last two home games of the inaugural season. – Courtesy of Audrey Gamble/Westfield Starfires