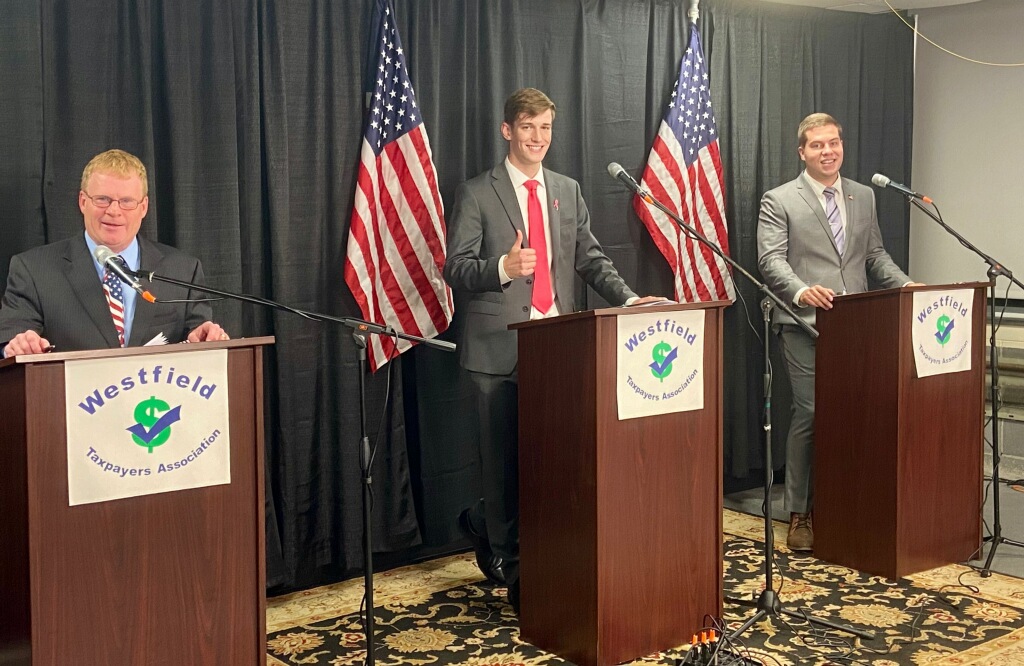 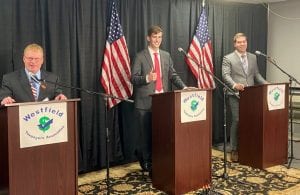 Each candidate was given the chance to make opening and closing statements. They were each given the same 10 questions which they answered in a rotating order. Each candidate could also give a 30-second rebuttal to another candidate’s answer if they so choose.

The candidates were first asked where their Westfield office would be located if elected and how they would engage with constituents.

Flaherty said he would locate his office somewhere downtown and would set up different times of day to meet with constituents.

“The pandemic does complicate things, but my phone and my email are open to constituents,” said Flaherty.

Pease said that he does not have an exact location in mind but that there would be an office in the city. He said he would have a legislative aide ready to interact with constituents when he has to be in Boston. He said he would hold regular office hours in different parts of the city like the Athenaeum or the Senior Center.

Garlo suggested that he would seek a central location downtown that is accessible by public transportation. He also said that he would utilize social media to interact with constituents and that he has already been having backyard meetings with voters.

The candidates were then asked about ranked choice voting, a ballot question in Massachusetts this election that would change the way one votes in the state. Voters would have to rank their candidates in the order of their preference, rather than just giving one vote for one candidate.

Pease said it is a complicated issue, but that he ultimately supports the measure.

“More people would think their vote counts more if they can vote for the person they actually want,” said Pease, who also said it would tamper special interest groups from influencing elections. He said in a rebuttal that it would also help raise up third party candidates.

Garlo said he certainly supports the measure, saying that his generation of voters is tired of “picking the lesser of two evils.” He added that he is receptive to any concerns about the process if people are worried about the change.

Flaherty said that he does not specifically support ranked choice voting, but that he would like to see some sort of change as the current system perpetuates the Two-Party system. He did note that such a system would help him in this race as an Independent.

Each candidate was then asked what they would do about the Cowles Bridge, a bridge in Westfield that has been reviewed for replacement since 1996 and declared a high priority replacement in 2018.

All three candidates said that they agree that the state needs to do its job in getting bridges repaired. Garlo said that he would work hard to get the bridge repair into the next state budget proposal. Flaherty suggested repealing prevailing wage law, which he said stifles competition in construction options. Pease said that he spoke with the MassDOT District 2 office who said that ETL construction was awarded the bid for the bridge and that there is a preconstruction meeting on Oct. 20.

They were then asked about the risk of flooding in Westfield and how seriously they take that risk.

Each agreed that the risk was high. Flaherty said that he wants to see the Westfield Flood Control Commission have a little bit more autonomy so that they could work to mitigate the potential risk themselves.

Pease said he would advocate for more funds to complete the projects on two of the flood control dams owned by Westfield. There are five such dams in Massachusetts not owned by the state.

Garlo said that it would take cooperation on the local, state, and federal levels to complete the Arm Brook and Powdermill Brook dam rehabilitation projects. He said he wants to form partnerships to get the project on track in order to hand it off to the state.

The candidates were asked about their views on mandatory flu vaccinations for kids going to school as the pandemic rolls on.

All three candidates agreed that one should be allowed to opt out of the vaccine if they have a medical or religious exemption. Pease said that he is nervous about anything medical being mandated by the government, especially if the vaccine is not proven 100% effective in a given year. He said that 81 percent of Westfield students get the vaccine anyway.

Garlo said that 2020 is unique with the COVID-19 pandemic and the upcoming flu season happening at the same time. He noted that the governor is expanding hospital capacity because of the expected two-disease combination. He said that the mandatory vaccine is a community solution “so we don’t overwhelm our hospitals.” He did note that the medical and religious exemptions are in place and should remain as such.

Flaherty echoed Pease in saying that mandatory medical decisions should not be made by the government, but by one’s self and their doctor. He said he supports continuing to provide remote education for those who cannot come back to school in-person.

The moderators then asked the candidates about their views on gun control.

“I believe enforcing the laws on the books is more than acceptable at this time,” said Garlo, “We are a leader in gun safety and gun training.”

He said there should always be some gun free zones such as schools, but that he largely supports one’s right to bear arms.

Flaherty made a similar comment, saying that he supports the 2nd amendment but would like to make sure “good people” get guns, and “bad people” do not.

“I haven’t seen evidence to support that the limiting of suppressors or having gun free zones affects gun crime,” said Flaherty.

Pease said he is a strong 2nd Amendment supporter, and said that there should be no further laws affecting gun ownership and that some laws have already gone too far.

The three were then asked if they believed that the water coming from wells 7 and 8 was “clean” after being treated for PFAS compounds by Granular Activated Carbon (GAC).

Flaherty said that the water currently met the guidelines of 20 Parts-per-trillion of PFAS compounds, but that it still could be cleaner. He suggested that he would support a grant for the cleanup of the city’s water and that the city should not be on the hook when others are responsible.

Pease agreed that a grant should be given by the state. He did note that only six PFAS compounds are currently being tested for and that he would like to see the remaining 9 compounds be measured as well.

Garlo said he could not say for sure that the water is clean, but that he would also like to advocate for testing for every notable PFAS compound.

They were then asked about the Barnes Aquifer Protection Advisory Committee, which the City of Westfield left in 2018.

Pease said that a new agreement should be considered for the Barnes Aquifer Protection Committee, but he does not feel that it is the role of a state legislator to make that happen.

Garlo said he would be happy to engage in discussions to get the city back into the agreement or at least find out why Westfield chose to leave it.

“That committee is an asset to our entire region,” said Garlo.

Flaherty said he supports reforming the committee. He noted that the aquifer supplies 1.2 billion gallons of water to 60,000 people. He said it is the responsibility of every level of government to preserve the aquifer.

The candidates then spoke about charter schools and if they would change anything about them.

Garlo said that charter schools take away money from the public school system, causing cuts to a majority of student’s educations.

“Northampton sends 200 students out of town, which guts $2.5 million from what they get from state funding,” said Garlo.

He said he would work with the state to ensure charter schools don’t cut into public school funds.

Flaherty said that parents should always have a choice in where their kids go to school and that public schools can’t provide everything.

“Having competition in schools is big to me,” said Flaherty.

Pease said he supports charter schools, but that he would fight for higher reimbursement rates for public schools impacted by kids going to charter schools instead. He said his biggest complaint is unfunded mandates, especially related to special education programs.

“We need to stop making programs that work for a year, but then the funding for that program goes away but the mandate for it remains,” said Pease.

The final question asked of the candidates was if there are any pieces of pending legislation that are most important to them.

Flaherty said that his priorities are the FY21 budget bill and any bills related to the fight against COVID-19. He said he does not like seeing cities and towns in limbo every year trying to work their own budgets. He suggested using stabilization accounts to buffer money and that he wants to see progression in K-12 education.

Pease said he is against the Reform Police Standards bill, as he thinks it was rushed out too quickly.

“You’re going to lose a lot of good officers if you lose qualified immunity,” said Pease.

He also said he is against the raising of the gas tax as it appears in the Transportation Bill.

Garlo said his priority would be to make sure Westfield gets its fair share in the upcoming budget, and that he would quickly begin work on the FY22 budget if elected. He said that State Senator John C. Velis told him that he has never been so busy with a budget in the last five years.

The Westfield Taxpayers Association announced at the conclusion of the debate that there will be a final debate for the State Senate race between John C. Velis and John Cain on Oct. 21.