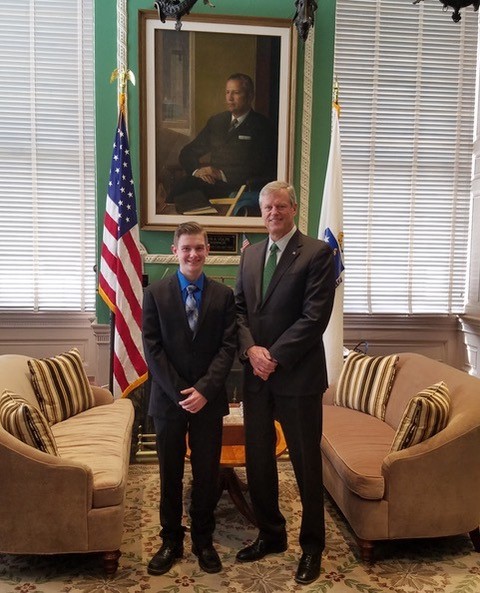 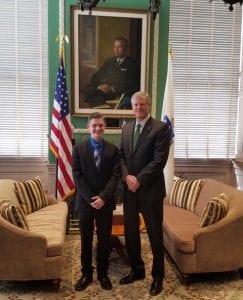 Trent Oliver (left), of Westfield, is a finalist of the Massachusetts Alliance of Boys & Girls Club’s statewide Youth of the Year competition and recently met with Governor Charlie Baker. (Photo courtesy the office of Gov. Baker.)

BOSTON – On Friday March 8, Governor Charlie Baker and Lieutenant Governor Karyn Polito met with a finalist of the Massachusetts Alliance of Boys & Girls Club’s statewide Youth of the Year competition, Trent Oliver, and recognized Oliver and the other contest participants for their accomplishments in their Clubs and communities.

Finalist Trent Oliver (Westfield) met with Governor Baker as part of a visit to the Massachusetts State House.  Youth of the Year Destiny Santalucia (Watertown) and finalists Yankuel Ceballos (Lawrence) and Johan Cruz Hernandez (Holyoke) were unable to attend due to academic obligations.

“I want to congratulate Trent on this impressive recognition for the Commonwealth and his hometown of Westfield,” said Governor Charlie Baker. “We appreciate the work that so many teens across Massachusetts do every year with their local Boys & Girls Clubs as inspiring leaders and strong students to make their communities and the Commonwealth a better place to live.”

“It was a tremendous honor to meet with Governor Baker today,” said Oliver.  “I could not be more proud to represent this state and my fellow Boys & Girls Club members in the Youth of the Year program.  To me the Boys & Girls Club has always meant friendships.  It’s a place I feel comfortable.  I’m a proud Club kid.”

For 70 years, the Boys & Girls Club Youth of the Year competition has served as the premier recognition program for Club members. It honors teen Club members who demonstrate exemplary moral character, responsibility to home and family, community and club service, scholastic achievement and diversity of school activities, ability to set goals, and poise and public speaking. In addition, the judges consider any significant obstacles the youth has had to overcome. The selection process includes essay writing, an oral presentation, and an interview.

In Massachusetts, each local Club winner goes on to the statewide competition. This year’s intensive, two day long event was held in June, with 38 youth from across Massachusetts competing.  A panel of judges made up of leaders in business, the non-profit world, and government evaluated the contestants, and the event culminated in the selection of the four finalists and the naming of Destiny Santalucia as the 2018 Massachusetts Youth of the Year.  Santalucia was chosen for her leadership both at school and in her community.  She currently attends Rensselaer Polytechnic Institute.

As the 2018 winner, Santalucia will receive a $20,000 college scholarship from the Myra H. Kraft Giving Back Foundation and a $5,000 scholarship from Disney, a national sponsor of the contest. She also represented the Commonwealth in the Boys & Girls Clubs of America Regional Youth of the Year competition. In Massachusetts, the competition is additionally sponsored by Cross Insurance, the Ninety-Nine Restaurants who provide the dinner, and Comcast, who also provides a free laptop to each of the finalists.

The five regional winners compete for the title of National Youth of the Year. President Trump meets all five finalists and recognizes the winner at a White House ceremony in September.  In a mirror of this national tradition, the Massachusetts state finalists meet each year with the Governor.

The Massachusetts Alliance of Boys & Girls Clubs is a consortium of 41 Boys & Girls Club corporations that operate in 67 communities throughout the Commonwealth of Massachusetts.  The Alliance provides a mechanism for joint decisions and cooperative actions among Clubs in Massachusetts, promotes and strengthens the relationships of Clubs with public and private agencies throughout the state, and raises funds from state agencies and political subdivisions. More than 175,000 youth in Massachusetts utilize Club services each year.   The Alliance is committed to the Boys & Girls Club mission to enable all young people, especially those who need us most, to reach their full potential as productive, caring, responsible citizens.