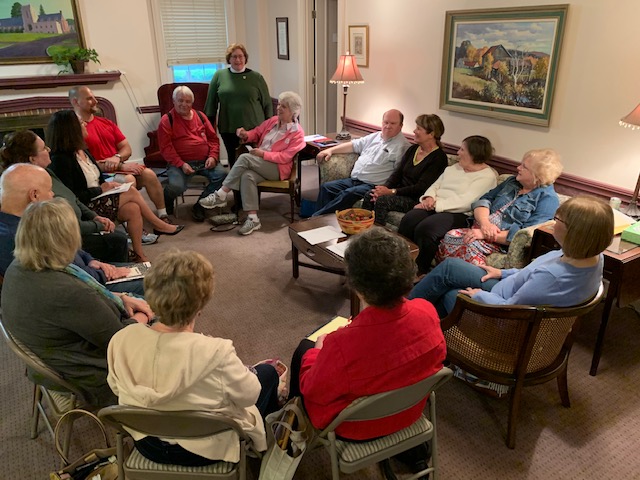 WESTFIELD-Fresh picked strawberries from Kosinski Farms will take center stage at the Strawberry Festival on June 20 – first at the Westfield Farmers’ Market and then on the Park Square Green during Westfield on Weekends’ MusicFest.

Now in its 157th year, members of the Episcopal Church of the Atonement and countless volunteers will once again donate their time to ensure that the popular event exceeds expectations – and raises money this year for the Westfield Soup Kitchen. 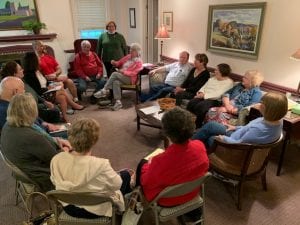 The Rev. Nancy Webb Stroud, rector of the Episcopal Church of the Atonement, Westfield, addresses the Strawberry Festival Committee prior to a logistics meeting Wednesday night.

“Our church mission of outreach is drawn in by grace and we reach out with love to support others in need,” said Tamara Joseph, co-chair of the festival for the second year with Bill Parks.

The festival committee met recently at the church to review logistics and assignments.

“It has been amazing to be a part of this group of volunteers,” added Joseph.

Since the festival’s inception, strawberries have always been at the heart of the charity event. Committee members noted the festival began as a fundraiser to build their place of worship. In the inaugural year, $60 was raised. After the parish was established, church members turned their fundraising efforts to supporting the community.

Joseph explained that recipients of festival funds are chosen by the church each year through an application process based on level of need and benefit to the community.

“Most importantly, the organization chosen also shares the mission of the church,” said Joseph.

“When the Westfield Soup Kitchen volunteers learned we were selected as this year’s Strawberry Festival recipient, everyone was surprised and elated, yet humbled as this is a competitive process,” said Ann Kousch, who has served for two years as president of the organization.

Kousch noted in her tenure as president, she has spent countless hours speaking about the mission of the soup kitchen to numerous businesses and organizations.

“Many nonprofits are struggling these days,” said Kousch. “We all need to share our stories and ask others to consider a donation so that no one in our community minded city goes without basic necessities.”

The tasty treats to be offered during the festival include a dish of strawberries with either a biscuit or vanilla ice cream. Sue and Gary Cole and a team of volunteers will be making the homemade biscuits early that morning. After basic expenses, all money collected from the sale of the strawberry desserts will be earmarked for the Westfield Soup Kitchen.

“We are planning on using 23 flats of strawberries and five tubs of ice cream,” said Joseph, noting each tasty treat is priced at $5. The ice cream will be purchased from the Summer House in Southwick.

Tickets are now available at the church office from Tuesday through Friday, 9 a.m. – 12:30 p.m., at the host tent at the Westfield Farmers’ Market on Thursdays from 12 – 6 p.m., and on the day of the event.

“We also want to thank our sponsors as well as those representing the Boys and Girls Club who will be helping us with setting up and taking down the festival,” said Joseph.

For Kousch, she is also “thankful” that the Westfield Soup Kitchen has been chosen as this year’s recipient for festival funds.

“The funds raised will help us continue our mission of providing free, hot, evening meals to those in need,” said Kousch. “Soup kitchen volunteers will help in all aspects of the Strawberry Festival, from slicing strawberries, to setting up tables, scooping ice cream, selling tickets and cleaning up.”

Kousch added that, on average, 54 meals are served each night at the soup kitchen located at 101 Meadow St. Meals are not served on Saturday nights.

“There is definitely a need to serve meals to our hungry and the Episcopal Church of the Atonement is recognizing this need publicly by gathering together to rally for our cause,” said Kousch. “We are so appreciative and hope to see many folks come downtown on June 20 for strawberry shortcake.”