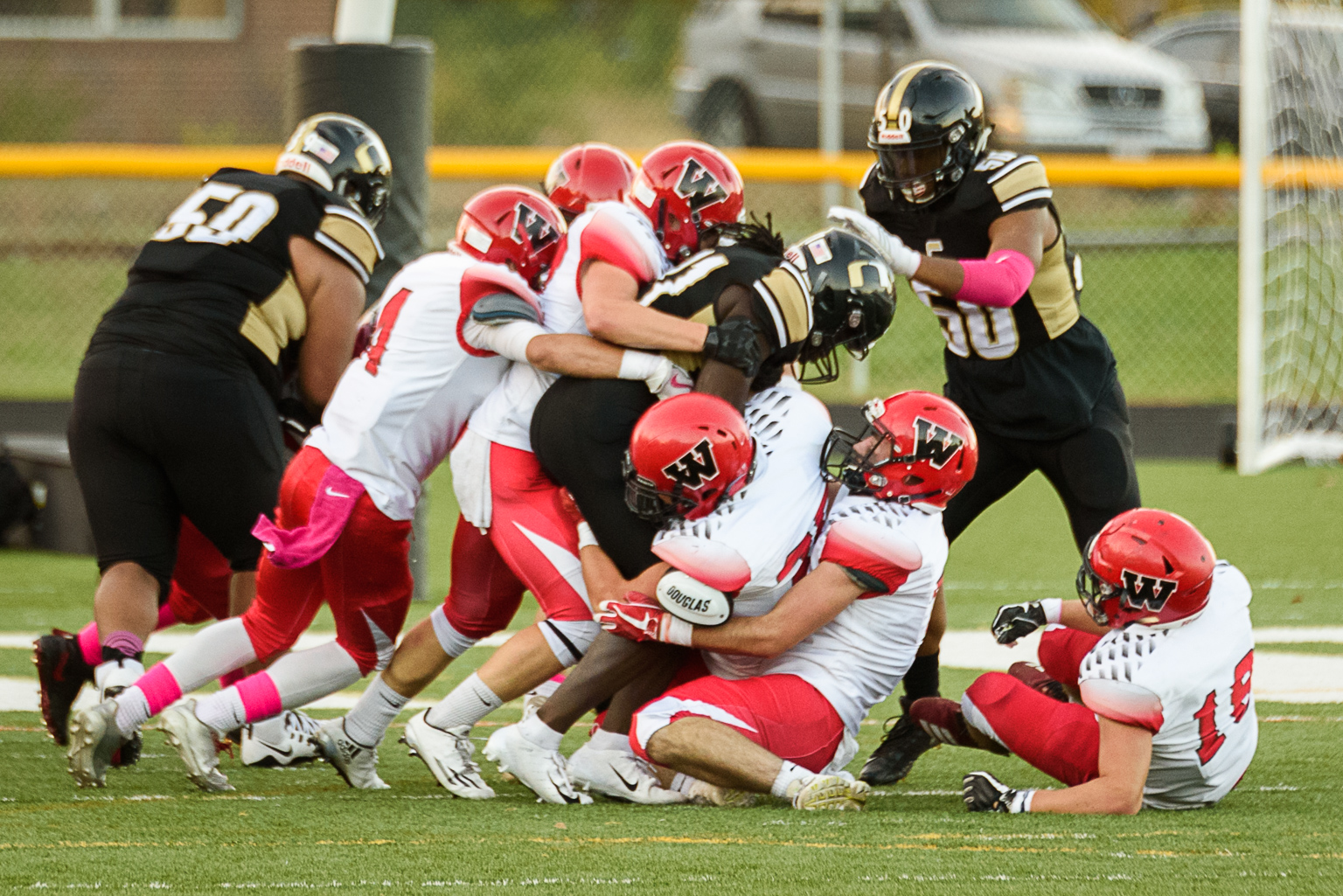 SPRINGFIELD – The streak is no more.
The Central Golden Eagles put on an offensive show – a high-flying act of sorts – to topple the previously unbeaten Westfield Bombers 41-0 in a Friday night football game at Berte Field in Springfield.
Central (5-1) attacked by air and land, and had Westfield (5-1) seeing black and gold all night long.
Westfield recovered a fumbled kickoff by Central to begin the game, taking over at the Golden Eagles 38 yard line. The Bombers struggled to get the run game going, gaining just two yards on the ground, suffering two penalties, and failed to complete a pass. 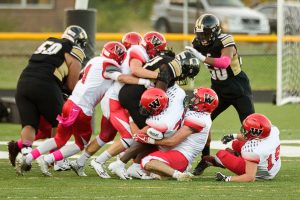 Central struck on its first play of the game when junior running back Kyles Kwame rumbled 89 yards for a touchdown. The score came with 7:32 remaining in the first quarter.
Westfield sputtered on its second drive after gaining a first down on fourth-and-one deep in its own territory, and punted it away.
Central needed just two plays to score. The first, a 23 yard run from Isaac Boston, brought the ball to the Westfield 22 yard line, and the second, a 22-yard touchdown pass from Boston to senior wide receiver Myles Bradley made it 14-0 with 2:43 left in the opening quarter.
Kyles displayed a bit of elusiveness and power a short time later when, on a 40-yard run, he juked a couple defensive players and dragged another draped to his jersey another five yards. He immediately followed that up with a five-yard TD run, and Central led 20-0 with 4:45 to go in the half.
Westfield did not fare much better in the second half.
After Westfield went four plays and out, Central put together a long, time consuming drive that chewed up 65 yards, nearly five minutes, and culminated in Marcus Crawford’s six-yard scoring run.
Central scored again with 1:10 remaining in the third quarter (a 41 yard TD throw from Boston to Cqari Bacote), and again with 4:05 left in the game (a 41 yard throw from Mahari Miller to Cameron Lee).
There were a few bright spots for Westfield, including a bruising hit from Westfield defensive back Adam Boggs to break up a pass out in the open field late in the first half, and a spectacular 22-yard third quarter run from senior running back Dakotah Moynihan.
Moynihan, who appeared to be stopped for a loss in the backfield on a late third quarter carry, reversed field, stumbled near the line of scrimmage, regained his balance and turned upfield, tip-toeing along the sideline before being hit out of bounds.
Westfield returns to action next Friday night at home against Holyoke. Kickoff at Bullens is 7 p.m.

GIRLS SOCCER
Bombers tame Lions
Westfield 1, Ludlow 0
Westfield’s Nina Prenosil scored the game-winner with an assist from Mackenzie Liptak with 4:20 remaining in regulation of a thriller.
Adrianna Arona made eight saves for the Bombers to earn a shutout in net.

Goodreau scores
Renaissance 6, St. Mary’s 1
Allie Goodreau scored the lone goal from Emma Goodreau for St. Mary’s (7-4-2), which played down four starters for much of the week.
“We just need to get healthy so we can hopefully get back on track and qualify for the postseason,” St. Mary’s coach Patrick Olearcek said. “We still have five games left to get on a roll so hoping next week is a fresh start.”