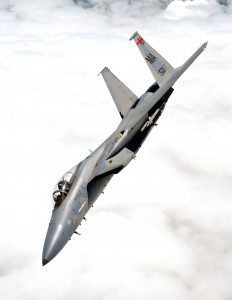 An F-15 aircraft from the Barnes 104th Fighter Wing performs a steep bank maneuver during a recent training exercise. Residents could see – and hear – an increase in flights taking off in a southerly direction out of Barnes Airport due to changes in Federal Aviation Administration (FAA) policy. (File photo by chief photographer Frederick Gore)

WESTFIELD – The city could see – and hear – an increase in flights taking off in a southerly direction out of Barnes Airport, including the 104th Fighter Wing, due to changes in Federal Aviation Administration (FAA) policy.
“This affects every airport across the country,” said Maj. Matthew Mutti of the 104th.
The change stems from a recent event involving three jets that got too close to each other at Washington, D.C.’s Ronald Reagan National Airport.
According to the Associated Press, a preliminary FAA report calls for the ending of “opposite-direction” operations, except for emergencies, until a standardized procedure can be put in place. There is no current national standard for the maneuver, in which controllers direct some planes to take off and land from opposite the usual direction.
The new policy follows an incident at Reagan National Airport on July 31 when three  U.S. Airways commuter flights got too close to one another. Air traffic controllers had been changing the direction in which planes were landing and taking off because of bad weather.
Because of what officials called a miscommunication, controllers cleared two outbound flights to head in the same direction of an incoming plane. There were a total of 192 passengers and crew on the three craft.
Officials said the planes were closer than the required 1,000 vertical feet and 3.5 lateral miles of separation.
According to The Washington Post, this is a common event, and there are many reasons that opposite-direction traffic may be used. They include protecting noise-sensitive areas, conducting flight checks of navigational systems and expediting the landing of emergency or VIP aircraft. Pilots will also ask for opposite-direction operation for convenience. It is up to the controller to approve the request, traffic permitting.
While this is not generally a problem at Barnes, Mutti said they must follow FAA regulations.
“If this happens, we cannot follow the noise mitigation agreement we have,” said Mutti. “It’s out of our control.”
Mutti said the 104th follows the plan set by the Barnes tower, which is under FAA control.
“It may seem we’re going against the mitigation agreement, but we have to abide by the FAA,” Mutti said. “We are trying to get a waiver.”
Currently, the 104th F-15s take-off over the city only when they are scrambled, or if the winds are gusting at a speed and direction (or a run-way issue) that makes northern take-offs unsafe. Mutti said on average this equates to less than 10 percent southern take-offs.  With the new FAA guidance, the conservative estimate may climb to near 20 percent or higher.
“This has affected three take-offs so far this month. We are working with the FAA to see if waivers would be entertained, but at this point we must follow the new guidance,” he said. “I doubt we’ll see any waivers in the next few months though.”
The 104th wants residents to know it is not breaking its agreement.
“Due to the efforts we take within the city to decrease the impact of noise
over the city, we wanted to ensure that the community knew what is causing the change in flight patterns,” Mutti stated.