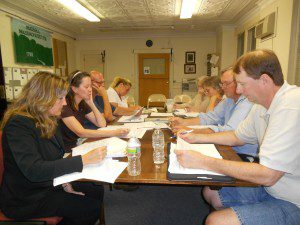 RUSSELL – The Russell Finance Committee met on Wednesday to discuss taking  a regional approach to the Gateway school budget, among other items.
Derrick Mason, finance committee member, referred to a letter from Wendy Foxmym of the Pioneer Valley Planning Commission written following the July meeting which she attended at the finance committee’s request to address concerns “about the adversarial nature of budget-setting and adoption in the Gateway region.”
Foxmym recommended that the Town of Russell initiate a Gateway Municipal Advisory Committee, to be comprised of representatives from the seven towns, the school superintendent, and the school business manager. The goal would be for the towns and the school to work together to guide the school budget. Foxmym’s letter noted that this model has been used in other regional school districts.
Foxmym also wrote that she would be willing to help assist the process, and that the PVPC has some technical assistance funds to cover her time.
Nancy Boersig, Russell town manager, asked if the Russell Finance Committee would take the lead and run the program.
“In theory,” Mason responded, “we can do it all ourselves, but that’s a big burden to place on a committee that’s 50 to 60 percent new.”
“Doesn’t the school committee have sub committees that do that now? The role of the school committee is to act as a liaison, to find a happy medium between the towns and the school,” asked Boersig.
Mason said that the Regional Finance Committee would take more of an “overall big picture” approach than the schoo lcommittee’s finance sub-committee, which studies the school budget numbers. He said he considered Ruth Kennedy’s active participation, as a member of the school committee and its finance sub-committee, critical to making it work. Kennedy was present at the finance committee meeting on Wednesday.
Steven Garen, a new member of the finance committee, suggested that Russell first contact the other finance committees.
“Why don’t you send an invitation to the other finance committees to meet, to find out where they’re at?” Garen asked.
The committee agreed to extend itself and to invite a representative from the finance committees of each of the seven towns in the Gateway district to a meeting. David Cummings, a member of the Russell Finance Committee, agreed to make the calls.
“My impression is that Wendy’s (Foxmym) services can be helpful to us. I don’t think we want to be over reliant on them.,” said Mason.
Mason said he would get back to Foxmym, tell her they discussed the matter, and ask her what the committee would have to do to get her to help.
The Gateway Regional School budget comprises 63 to 67 percent of the town of Russell’s overall budget, according to Boersig.
In other business, the committee voted for officers and sub-committee members for the following year. Elected were Brenda Marra and David Cummings as co-chairmen. Theresa Fox was elected secretary.
Sub-committee members were also assigned as follows: Theresa Fox and Brenda Marra, Gateway budget; Derrick Mason, David Cummings and Darlene Meachum, Regionalization; Steven Garen and Brenda Marra, Town Department & Commission budgets.  Nancy Boersig agreed to keep the Finance Committee informed of grants and other special projects in progress, and also of future special projects and grants.