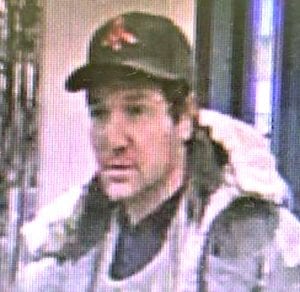 City police have released a photo, captured from security video, of a man who robbed the TD Bank on Main Street Tueday afternoon. Anyone who may be able to identify the man is asked to call the Detective Bureau at (413) 572 6400.

WESTFIELD – The TD Bank at 60 Main St. was robbed Feb. 11 by a man who claimed to have a gun.
Although no firearm was shown, city police report that a 3:40 p.m. caller from the bank reported that a man who passed a note to a teller claiming to have a firearm had just robbed the bank.
At almost the same time, the bank’s alarm monitoring unit advised police that three panic alarms had been triggered at the bank.
Officer Bradley White reports that the robber left the bank on foot with a small amount of cash and witnesses reported he had been seen walking away on Free Street.
He reports that the man was described to be a white male with curly salt and pepper hair reaching down to his ears with “scruffy” facial hair. He was reportedly wearing a Red Sox baseball cap and a puffy green jacket without any design on it.
A State Police K-9 team, which happened to be on East Main Street, responded to the bank to assist with the search but the suspect was not found.
The city detectives posted photos of the suspect on their Facebook social media page asking the public for help identifying him. The detectives advised that anyone who sees the suspect should not approach him but should instead call (413) 572 6400 as soon as possible.