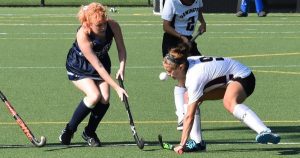 WESTFIELD – Johnson & Wales ran out to a big lead on Wednesday night, taking down the Westfield St. Owls 7-3 in a non-conference field hockey game in Providence, R.I. Wildcats’ senior Jillian Miele (Wilmington) scored three goals in the victory.
The Wildcats got out to an early lead in the game, scoring two goals in the opening period of play. For the first goal, Miele stormed through the midfield and slotted the ball to the bottom right corner of the net past the goalie.
JWU (2-1) added to their lead in the second period, scoring two more in the frame, with Claire Decker and Kaitlyn Freeman supplying the goals. McKayla Weaver added one goal just over one minute into the third frame, extending the Wildcat lead to five.
Westfield (0-3) pulled one back halfway through the third period through Shannon Roycroft (Barnstable). In the fourth and final frame, Miele added her second and third goals to extend the lead to six at 7-1.
Westfield got late goals from Cheryl Latona (Granby, Conn.), who tallied for the third time in as many games this season, and then Kelsi McDevitt (Gilbertsville, Pa.), who netted her first collegiate goal for the Owls to cap the scoring.
Westfield will play its home opener on Saturday at 11:00 a.m., hosting Western Connecticut State University at Alumni Field.

Chris Allen got Western New England (2-0-1) on the board in the 70th minute of play, knocking home a deflected pass in the penalty area. Roger Leland added a second goal less than three minutes later, then Mike Milazo scored on a penalty kick in the 86th minute to put the game away. Matt Remilard tallied in the 88th minute for the 4-0 final.
Remillard finished with a goal and two assists for the Golden Bears.
Westfield State (2-1-0) starting goalkeeper Griffin Brown had to leave the game just 5:18 into the contest after an apparent injury on a play in front of the Owls goal.
Owls first-year Collin O’Brien came on in relief and finished with five saves while playing the final 84 minutes in goal.
Westfield State will host another local rival, Springfield College, Saturday at Alumni Field at 2 p.m.

WOMEN’S SOCCER
University of New England 4, Westfield State 0
Playing their third game in four days and 500 miles, the Westfield State women’s soccer team fell to the University of New England, 4-0, in Biddeford, Maine on Monday.
The Owls (1-1-1) had played a pair of games in the Cougar Classic in Union, N.J. the previous Friday and Saturday, before turning the bus northward.

Senior Meredith Kennedy factored in three goals for the Nor’easters.
The UNE (3-0) back line held strong once again as the hosts recorded their third consecutive shutout to begin the season.
Hannah Cottis put back a rebound off a shot by Kennedy to start the scoring the 17th minute. Lizzie Frattaroli corralled a lofting pass inside the box and tapped it to Kennedy for a marker later in the half as the Nor’easters extended the lead to 2-0. Tori Keyes made it 3-0 Nor’easters at the half with a goal in the final minute. She ran through several Owls’ defenders on the way to her team-leading third score of the year.
The Nor’easters outshot the Owls 17-9 overall, including a 12-4 margin on goal. Lauryn Davis stopped seven shots for the Owls, with Sarah Fuller adding one save in relief.
The Owls will be back in action Saturday with a game against the U.S. Coast Guard Academy in the Drew Fall Festival Tournament in Madison, N.J. – Courtesy of Westfield State University