SOUTHWICK –    Three teachers in the Southwick-Tolland-Granville Regional School District were recognized on Thursday with the Pioneer Valley Excellence in Teaching Award, which is also known as the Grinspoon Award. The award is named after Harold Grinspoon, who is the Founder of the Harold Grinspoon Foundation. The foundation honors educators throughout Western Massachusetts each year and helps teachers strive for excellence. 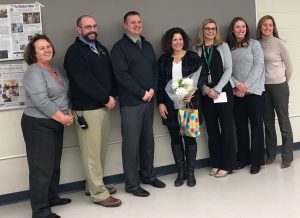 It was a complete surprise for all three teachers as school district officials and faculty members of each school followed the Southwick Regional School band into each teacher’s classroom, while the band played their music.

The three teachers who received the awards were Elizabeth McCarthy, Grace Gustafson, and Judy Stearns. McCarthy, a Special Education teacher at the Southwick Regional School who has been with the school since May of 2016, was very surprised by the announcement of the award.

In a statement from Superintendent Jen Willard, she describes the qualities that resulted in McCarthy earning the award.

“From the very beginning, Beth has been a dedicated, professional teacher. She goes above and beyond for all students, not just those who she is required to support. Their successes are her successes and their failures are her failures.”

Grace Gustafson, a sixth grade teacher at Powder Mill School, was a recipient of the Grinspoon award. (Photo courtesy of Greg Fitzpatrick)

A sixth-grade teacher at the Powder Mill School since the start of the 2016-17 school year, Gustafson has taken the role as a team leader. While in Gustafson’s classroom, Willard explained to everyone in attendance why Gustafson was worthy of the Grinspoon award.

“She is fast becoming very knowledgeable about the standards and how to create learning targets for these standards. She assumes these responsibilities very seriously and has worked collaboratively with her fellow teachers as well as the Instructional Coaches to improve instruction within the District.”

The longest tenured teacher in the district of the three, being a second grade teacher at Woodland School since 2006, Judy Stearns was very humbled to get the recognition.

“I think it’s a wonderful honor to be recommended by my peers by this,” said Stearns. “A lot of it is my kids.”

In Willard’s statement about Stearns, she stated, “Reluctant readers shine in her classroom and go from reluctant to ‘can’t stop’ reading. She works hard to keep current with standards and updates her plans accordingly.” 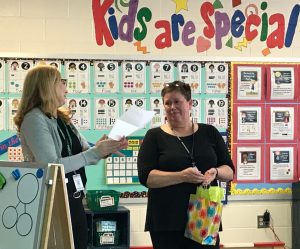 Every year, faculty members throughout every school district in Western Massachusetts nominate their peers for the Grinspoon award. Then, administrators in that district take the nominations and review them for final selection. This year, there were 17 educators in the school district that were nominated for the award.

“It’s an exciting day in the district,” said Willard. “It’s nice to be able to recognize the teachers that go above and beyond.”

Jenny Sullivan, who is the Director of Curriculum and Instruction for the school district, leads the organization of selecting the Grinspoon award winners every year.

The three award winners will now be honored at a banquet at the Log Cabin in Holyoke on May 2. Each recipient will receive a cash prize of $500, along with other non-cash prizes.