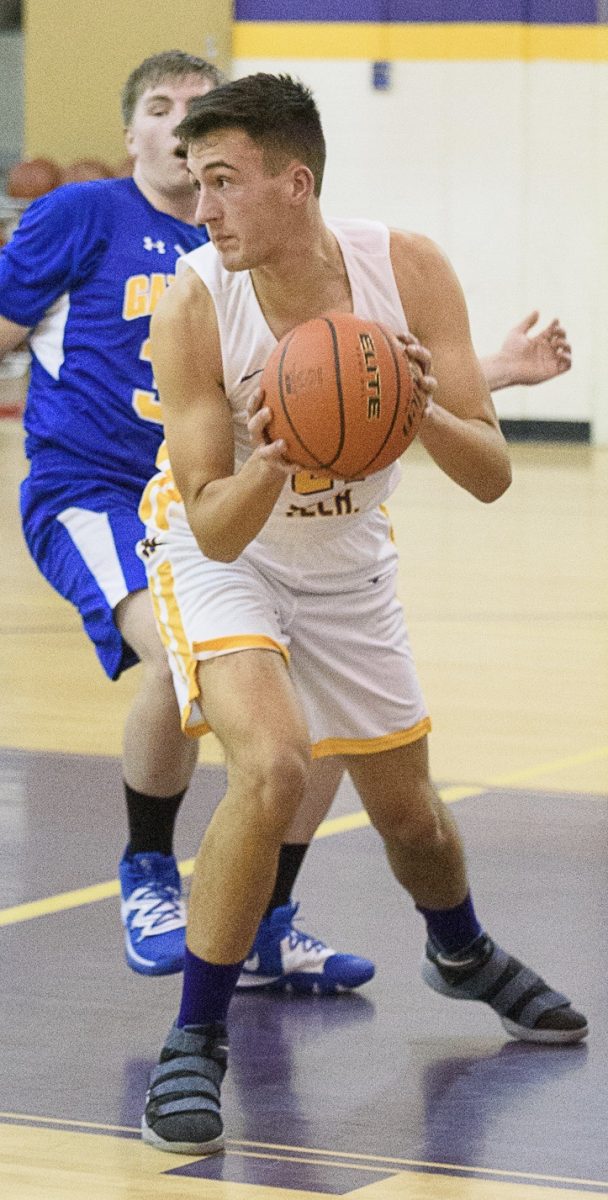 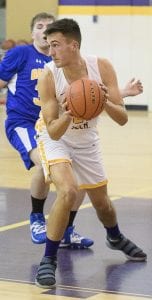 Westfield Technical Academy’s Carter Slack (21) contemplates his next move in a regular season boys basketball game. Slack and the Tigers punched their ticket to the postseason with a key victory Thursday night. (THE WESTFIELD NEWS FILE PHOTO)

THREE RIVERS – The Westfield Technical Academy High School boys basketball team’s early season swoon has given way to a late-season surge that has resulted in a postseason berth.
“We were 4-9 four games ago and could have folded, but now we are 8-9 and fought back,” Westfield Technical Academy High School boys basketball coach Kyle Dulude said, following Thursday night’s 46-42 win over Pathfinder. “It was a complete team effort.”
Coach Dulude said every member of the team has learned how to step up and do their part. That mentality was again on display Thursday against Pathfinder when eight different Tigers scored.
Darryl Reopel led the way for Westfield Tech with 13 points. Andrew Navarro and Bodhi Hall both chipped in with eight apiece. Carter Slack, Jordan Otero, and Emil Sevastyanov contributed on the boards for the Tigers.?Westfield Tech led the entire way. Pathfinder would not go away, going 7-of-11 from the free throw line in the fourth quarter.
“The lead grew and shrank like a slinky,” coach Dulude said. “The boys had to figure out some things on the fly and they made the adjustments they needed to when Pathfinder went on their surges.”
“I just can’t say enough about how our guys came together and played with pride tonight,” he added. “Hopefully we can keep rolling with this winning streak.”
Westfield Tech will close out its regular season Monday night against Smith Voke. If the Tigers win, they will own a share of the league title. Tip-off is at 7 p.m.

Smith rallies past STM
Smith Voke 53, St. Mary’s 46
St. Mary’s led for 28 minutes, and held an early 36-32 fourth quarter advantage before Smith Voke rallied. The Saints missed two crucial layups and six free throws in the final two minutes of regulation.
“You have to make your layups and you have to make your foul shots in crunch time,” St. Mary’s boys basketball head coach Joe Molta said “Unfortunately, we weren’t able to do that. That aside, it was a really good effort.”
St. Mary’s Jack Lamirande scored a team-high 23 points. Mike Pepe and Brady Collins finished with nine and eight points, respectively.

Thurs., Feb. 13
Bombers stay in postseason contention
Westfield 3, East Longmeadow 1
Westfield (5-7-5 overall, 3-4-2 Berry Division) kept its postseason hopes alive by staving off elimination with a much-needed victory against East Longmeadow. The Bombers now need a Spartans loss or tie against the Longmeadow Lancers Feb. 19 to qualify for the Division 3 tournament.