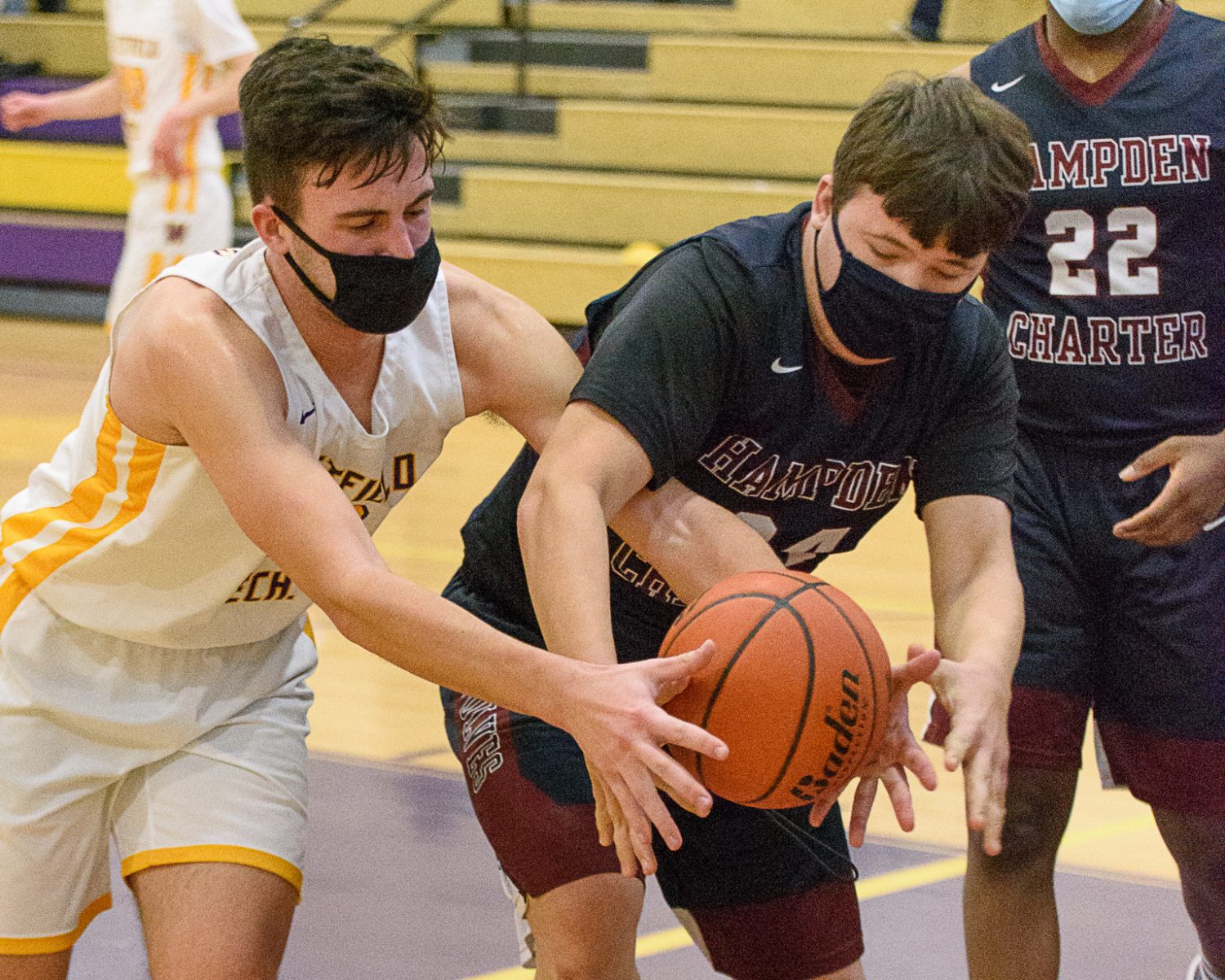 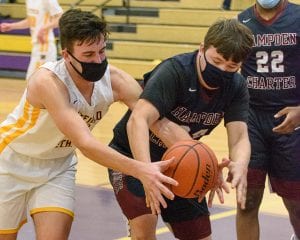 WESTFIELD – It would be easy to just say the Westfield Technical Academy High School boys basketball team saved the best for last, but the 2021 version of the Tigers were impressive from start to finish.
Westfield Tech put together a near-perfect COVID-shortened season, capping off their eight-game slate with a convincing 61-12 win over visiting Hampden Charter School of Science Thursday night.
Josh Sturmer (16 points) and Brody Zabielski (15) combined for 31 points.
“We knew we had a quick season from the start so we just wanted to give it our all in the few games we had,” Zabielski said. “I think we started off really hot and just kept it going the whole year.”
It was a blistering start for red-hot Westfield Tech in their final game of the season. The Tigers, spurred on by a smothering defense which forced eight straight turnovers, opened the game on a 19-0 run.
Andrew Navarro and Zabielski hit back-to-back 3-pointers to start the first quarter. Zabielski stole the ball on the ensuing possession and laid it in for an 8-0 lead. He then drained another trey with 5:08 remaining to give Westfield Tech an 11-0 advantage. Navarro scored on a breakaway layup. Zabielski followed with two straight 2-point buckets. Riley Sullivan buried a putback to make it 19-0.
“Our mindset was just press, press, press all game long and that’s what we did tonight and it worked,” Sullivan said.
Westfield Tech expanded its lead to 30 points late in the second quarter, 34-4, before HCSS nailed a 3-pointer with eight seconds left. The Tigers led 34-7 at the half.
In the third quarter, Westfield Tech built a massive 44-point lead in the third quarter. Sturmer made four field goals, Navarro, Emilio Ocasio, and Jackson Lambert each converted 3-pointers. The Tigers entered the fourth quarter with an eye-popping 51-7 lead.
Sullivan and freshman Al Rogers each hit 3-point shots in the fourth quarter as Westfield Tech instituted a huge wave of substitutions. It was Rogers first varsity three.
“The big thing was to see how the other 13 guys responded to (Al) making the three,” Westfield Technical Academy boys basketball coach Kyle Dulude said. “Everybody was excited. It was emotional. It was inspirational. …It’s just as much of a highlight as anything else because it shows that we’re a team and it shows the support that they have for each from senior down to freshman.”
Dulude said the hard-nosed work ethic of Rogers is what symbolizes the pride of the Tigers.
“It’s the chemistry; it’s the unity,” coach Dulude said. “I think maturity has so much to do with success. Throughout all my years coaching, I always feel like the most mature teams have been the most successful teams. Maybe this year has been one of the best years in awhile because of maybe that fact. We had that one loss – – it was a really tough loss to take – – we felt like we really earned it. We’ll remember it forever but we’re going to take pride in the fact that we kind of did everything the best we could. For the most part, 99 percent of the outcomes was what we were looking for.”
The success did not just come overnight though.
“I think this team started last year,” coach Dulude explained. “It’s a program and it’s a progression. I think in order to get to where we were this year, they had to take steps that we took in the last 2-3 years. We had two seniors since freshmen. The juniors made their mistakes as freshmen two years ago so it’s that learning curve. Maybe this year we did a little bit better performance-wise and scoreboard-wise because these kids made mistakes in the past and they learned from them.”
No matter what the reasons for their success, this Westfield Tech team, despite not having the opportunity to showcase their talents in the postseason – – tournament play was canceled early on this year due to ongoing COVID concerns – – will likely be one that stands the test of time.