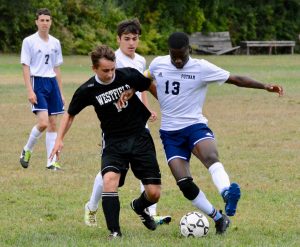 SPRINGFIELD – A golden era of soccer is upon those associated with soccer at Westfield Technical Academy.
While the girls’ soccer program is off to one of its hottest starts in several years – Westfield Tech shut out Commerce 4-0 Monday to improve to 3-1 – the boys’ team, which has made winning a habit under the tutelage of coach Kyle Dulude, continues to quietly impress in the early going this season.
Westfield Tech received goals from Philip Lisyanyy and Ruvim Suprunchuk to net a 2-0 road win over Putnam Tuesday at Hubbard Park to improve to 5-0-1. Daryl Reopel and Brad Marion earned assists.
Westfield Tech came away the winner, winning 50-50 balls with greater physicality.
“It was great to see our boys step up to the challenge and finish strong,” coach Dulude said. “We are off to a very good start.”
Dan Kontsimal anchored the Westfield Tech defense, alongside fellow teammates Kaiden Feist and Dave Tikhonchuk. Tigers’ goalie Anatoliy Suprunchuk (5 saves) recorded a shutout.
“We have (the) rest of the week off, so a little rest (between) now and then,” Dulude said. “Then we will push hard at practice Thursday and Friday.
Notes: On Monday, Westfield Tech shut out Greenfield on the road behind two goals each from Kontsimal and Brad Marion, and a shutout in net from Suprunchuk.

Set-up for loss
Agawam 4, Westfield 0
Westfield got beat twice off of set pieces, where when the ball is returned to open play, particularly off of free kicks, corners, and sometimes throw-ins.
“We still haven’t figured that out yet,” said Westfield coach Andrew Joseph, regarding one his team’s biggest weaknesses thus far this season. “It’s the one thing we need to overcome and fix if we’re going to have a shot here.”

GOLF
Rams dominate again
Southwick-Tolland 21.5, Hampshire 2.5
Southwick improved to 7-0 with a road win over Hampshire (5-2) at Beaver Brook Golf Course.
“We just have a senior laden lineup – five out of the top six are seniors,” Southwick coach Al Selden said. When you have a one (James Longhi) and two (Brad Duran) that have been playing since freshman year, it’s nice just not having to worry about the top of the lineup.”
Southwick’s top three golfers – Longhi, No. 3 Matthew Garrity, and Durand – have been averaging under 40 scores in seven matches this season.
Longhi shot a 37 Tuesday, with Garrity (39), and Durand (41) just behind.
Selden also noted that Southwick’s sweeping success has been made possible by a lineup that has taken care of business from top to bottom.

Hogan’s heroes prevail
Westfield 167, Holyoke 176
Jack Hogan shot an even par-36 to lead Westfield (4-3) to victory at home.
“He’s just been on fire lately,” Westfield coach Chris Strycharz said of his top golfer, who is averaging 36 over his last five matches. “He’s been great for us, playing really, really well. I can’t say enough great things about him.”
Liam Webster shot his low round of the season, a 41.