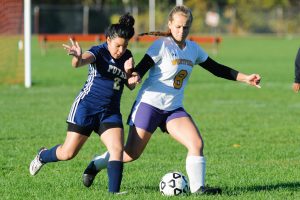 Liliya Stepanchuk fights for control of the ball

WESTFIELD – Westfield Tech fell to visiting Putnam 2-0 in the team’s final girls soccer game of the regular season Monday, but according to Tigers’ coach Lyle Washington it is only a minor blip on the radar.
“My amazing group of girls were just a little off today – one step behind on 50/50 balls and plays in general, and Putnam stepped up,” coach Washington said. “They just had an off day today.”
Westfield Tech freshman sweeper Angelica Chepurin had an amazing game, shutting down several scoring opportunities.
“I can’t wait to see where Angelica is two, three, or four years into her high school career,” Washington said. “I don’t think there’s a coach in Western Mass that wouldn’t want her on their team.”
First thing is first though, Westfield Tech, after ending a lengthy postseason drought will now prepare for the Western Mass tournament.
“My girls have trained hard all season and reached the playoffs for the first time in quite a few years,” Washington said. “I’m proud of them.”