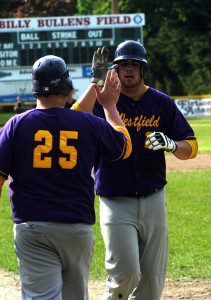 WESTFIELD – The Westfield Voc-Tech baseball team arrived a bit late to do-or-die week, but their performance proved to be a hit, another hit, and many more.
Voc-Tech collected 14 hits and drove in 14 runs, and Colin Fecteau had an effective outing on the mound to lead the Tigers past Smith Voke 14-7 Monday at Bullens Field.
Smith Voke jumped out to a 3-0 lead in the top of the first inning.
Jacob Opalenik reached on a one-out double, Kevin Wackerbarth walked, and Jason Talbot and Cullen Pike followed with line drive RBI singles. An error on Pike’s hit to the outfield was misplayed, allowing another run to score. Fecteau settled down to strike out the next two batters, as well as the first two of the second inning.
Voc-Tech cut its deficit to one in the bottom of the second inning with a two-out rally.
Bailey French walked and advanced to second on a balk. Tyler French drove in the base runner with a double to left-center field. He moved to third on Joey Gaulin’s bunt single, and scored on a botched run down by Smith Voke.
In the third, Voc-Tech exploded at the plate.
Seven consecutive batters reached base to start the third, and the Tigers nearly batted around the order twice in putting together a 10-4 lead. Tyler French belted a two-run, line-drive single down the third base line; Chris Oberther, Fecteau, and Reid Phillips collected RBI hits; Bailey French was hit by a pitch with the bases loaded; and, Gaulin and Oberther hit run-scoring sac-flies.
But that was not all for Voc-Tech. The Tigers squashed their opponent’s comeback hopes by tacking on three more runs in the fifth, and one in the sixth.
In the fifth, Hayden Jasmin hit a one-run triple, Jake Parsons blasted a double, and Oberther hit an RBI single. A run also scored on an error (Phillips collected the RBI).
Fecteau scattered nine hits, struck out 12 batters, and walked two in 5 1-3 innings. Jake Parsons pitched 1 2-3 innings of relief. He allowed no hits, two walks, and struck out three.
“This was a good game to come out with after the weekend to get back in the swing of things,” Westfield coach Clem Fucci said. “This game is just as important as the next game. If we keep winning, we’ll be all right.”
With the victory, Voc-Tech improved to 7-9. The Tigers, who must win their final two games to qualify for the Western Massachusetts Division III baseball tournament, will next take on crosstown rival St. Mary Tuesday night at Bullens Field. First pitch is at 7 p.m.
“It’s going to take a Herculean effort, but our kids will be ready,” Fucci said.