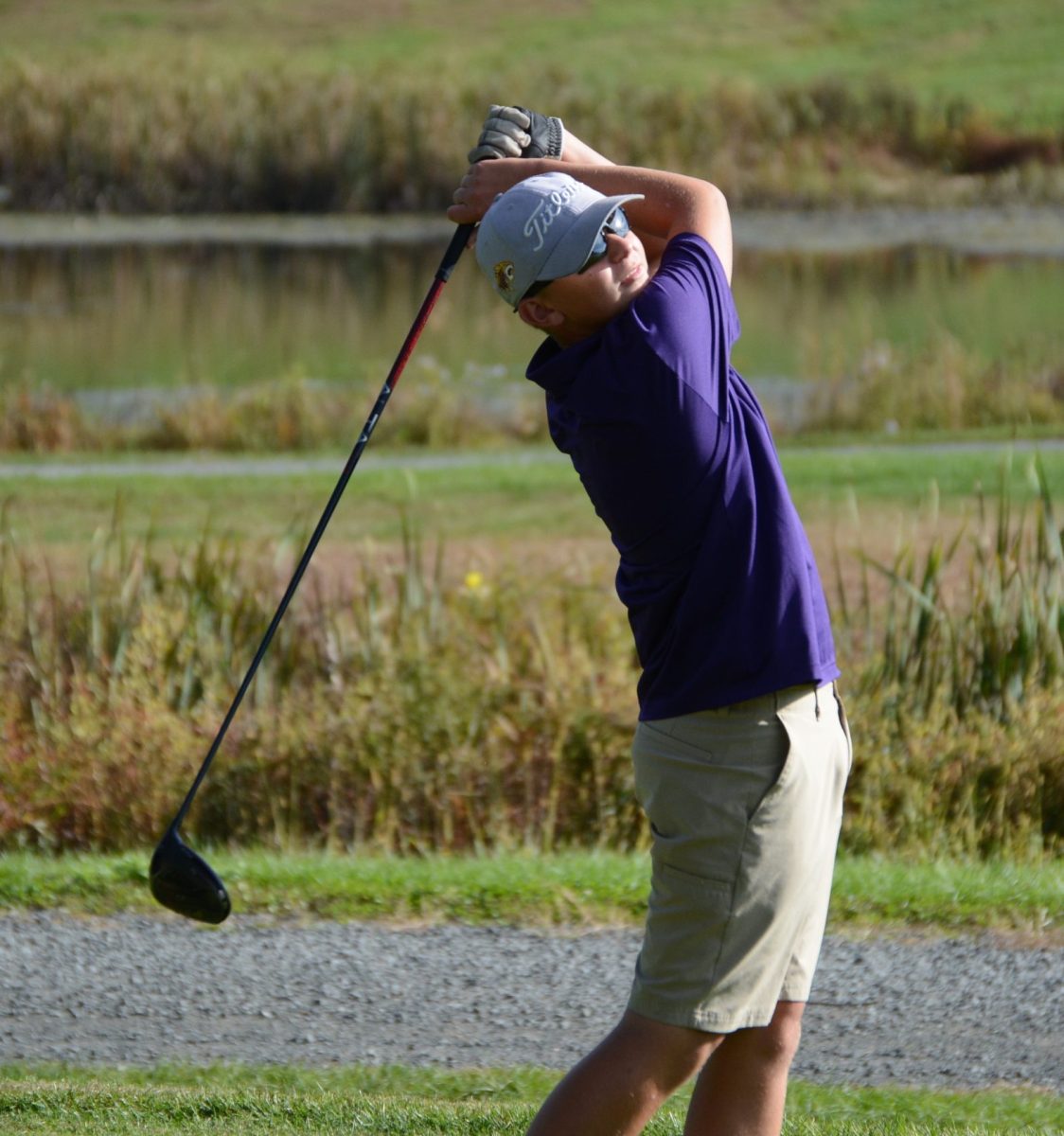 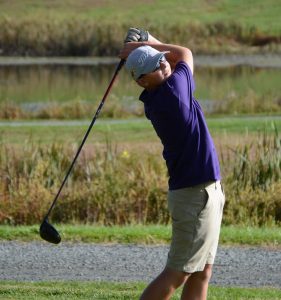 WESTFIELD – The Westfield Technical High School golf team’s regular season came to a conclusion Tuesday, a 16-8 loss to league champion Pathfinder at East Mountain Country Club.
“Pathfinder brought their ‘A’ game,” Westfield Technical Academy golf coach Bob Eak said. “They are clearly the best team in our league.”
While Pathfinder finished the season with a league best 10-1 mark, Westfield Tech was not far behind with a 9-4 second place league finish.
“It’s my job as a coach to make sure our golfers improve their scores by the end of the season and I think everybody did,” coach Eak said. “Quite a few kids hit their personal bests in matches.”
On Tuesday, Westfield Tech sophomores Deven Werbiskis and Andrew Reed shot in the 50s. Reed defeated his opponent 2.5-1.5. Tigers freshman Ella Werbiskis completed her lowest round of golf this season, a 53. She was the only golfer from either team to hit even par on the par-5 fourth hole.
“To see Ella put her heart and soul and progress as the season has gone along is definitely one of our bright spots,” coach Eak said.
Another highlight included a round of 43 for Reed, the lowest individual score for one of the team’s golfer.
With a team made up primarily of underclassmen – – three sophomores and the rest freshmen – – the future looks bright.
“The next three years look very good for us,” coach Eak said. “If I can land one or two better golfers than what we have, that could make us an even better team.”
Westfield Tech will have one more opportunity to shine when the Western Massachusetts Division III Championships take place Oct. 19 at Greenfield Country Club.
Notes: Also, Tuesday, the D2 Golf Championships will be held at Berkshire Hills Country Club in Pittsfield. The D1 Golf Championships are Mon., Oct. 18 at Tekoa Country Club.

Saints eye postseason
St. Mary’s 17, McCann Tech 7
St. Mary’s improved to 7-6 with a win against McCann Tech, still needing a win in their final two matches to qualify for the D3 championships.

FIELD HOCKEY
Griffith records four points in Bombers shutout
Westfield 7, Turners Falls 0
Westfield’s Lilly Taglieri and Jess Isler scored two goals apiece, Claire Griffith notched four points with one goal and three assists, Meghan Bowen had one goal and one assist, Norah Bargatti tallied a goal, and Rowan McDonald had an assist.
“Claire held the midfield line and made many plays happen,” Westfield field hockey coach Courtney Albee said.
Lindsey Brown (1 save) earned the shutout in net for the Bombers.
“This was one of the games where it was truly a team effort,” coach Albee said. “Every single member of this team played and played well.”

Rams post shutout
Southwick 3, Mahar 0
Three first half goals – – one each from Agnetha Furst, Agatha Hatzidakis, and Alyssa Jacob – – is all Southwick needed to get past Mahar in a Valley League matchup. Furst and Devan Fox each assisted.

BOYS CROSS COUNTRY
Phaneufs pace Bombers
Westfield def. Chicopee (N/A)
Westfield ran its final home dual meet, turning in one of their top overall performances of the season to overwhelm the opposition. Chicopee did not have enough runners to field and team score.
With the postseason around the corner, Westfield’s top runner Antonio Phaneuf ran a more reserved race, opting to pace his teammates Andre Phaneuf and Nicolas Krawiec to personal best times, the second meet in a row for the pair.
Andre Phaneuf won the race in 19:00, one second ahead of Antonio (19:01). Krawiec finished third with a time of 19:14. Walter Ninotti came in fourth, running a season best time (20:21). Bombers’ senior captain Pratham Makonahally placed fifth in 20:34.
Ten Westfield runners set new personal best times, some by as much as a minute and a half. “(That is proof) our season’s hard work is beginning to pay off as we enter into the final few meets of the season.”
Westfield will next race at the Bob McIntyre Twilight Invitational Meet at the Cape Cod Fairgrounds in Falmouth on Saturday.

GIRLS SOCCER
Goodreaus lead they way for Saints
St. Mary’s 3, Smith Academy 0
St. Mary’s Allie Goodreau led the attack with two goals and an assist, including a beautifully placed penalty kick. Emma Goodreau chipped in a goal and an assist.
Amelia Willenborg was stout in net with 10 saves for another Saints’ shutout.
“This was a nice win versus a very good opponent,” St. Mary’s girls soccer coach Patrick Olearcek said. “It was pretty warm and we are down a few starters so the girls had to dig deep and it paid off.”
In addition to the Goodreau sisters goals, Anna Puttick delivered a solid effort playing center-mid. “It felt like (Anna) ran a marathon out there as she was everywhere she needed to be,” coach Olearcek said.
St. Mary’s improved to 12-2.