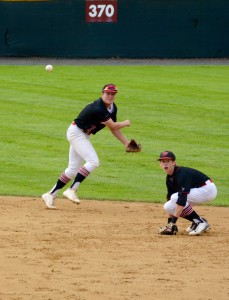 Westfield shortstop Sean Murphy follows through with a throw to first base for an out after making a spectacular infield stab on a hard hit ball up the middle to rob West Springfield of a base hit. (Photo by Chris Putz)

AMHERST – For all but one-third of inning of the Western Massachusetts Division 1 baseball championship, the Westfield High School baseball team delivered championship-caliber play.
Unfortunately for the Bombers, that one inning cost them a chance at bringing yet another championship trophy home to the Whip City.
No. 4 West Springfield scored four runs – all unearned – with two outs in the top of the third inning, and Terriers pitcher Nick Dombrowski (7 inn.,10 Ks) held off the third-seeded Bombers for a 4-3 finals victory Saturday at the University of Massachusetts-Amherst.
“Unfortunately, that’s baseball,” Westfield coach Mike Kennedy said of the team’s misfortunes. “We worked hard, we played hard … but nothing good happened.”
Westfield starting pitcher Dalen Mochak cruised through the first two-plus innings. Mochak struck out one batter, and retired the first seven batters he faced. He ran into trouble though in the top of the third inning.
After Westfield shortstop Sean Murphy made an amazing stab to rob West Springfield’s Brady Leclair of a base hit and fired to first base for the first out of the third, Troy Chaput reached on an infield error. Mochak forced the next batter to fly out. Then, with two outs, the wild adventure began. 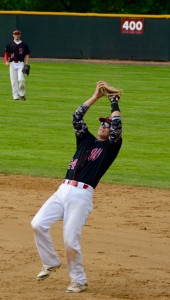 Westfield first baseman Sean Moorhouse squeezes his glove to secure an out on a pop fly. (Photo by Chris Putz)

West Side’s Conor Moriarty belted a run-scoring triple to deep left-center field for the game’s first run. Nick Karns walked. Dombrowski followed with a booming double that soared over the left fielder’s head and rolled to the outfield fence, and resulted in two more runs. Anthony Costa tacked on a key insurance run with an RBI single.
Westfield responded.
Kyle Roberts led off Westfield’s home half of the third with a base hit, the team’s second of the game. With two outs, Matt Hastings walked. Murphy followed with a two-run double to left center field. The Bombers trailed 4-2.
Westfield pitcher Ari Schwartz came on in relief to begin the fourth inning. He shut West Side completely down, retiring 12 straight batters.
Westfield catcher Anthony Clark cut the deficit to one with a 350-foot home run to right field in the sixth inning. It was the team’s last.
Westfield may have departed the postseason again for now, but with its nucleus intact and this loss fresh in the Bombers’ minds – next year they may likely be the predator and not the prey.
SOFTBALL FINALS RESCHEDULED: The inclement weather forced the postponement of the West Division 1 softball championship between fifth-seeded Westfield and No. 3 Agawam Saturday. The game will be played Monday at the University of Massachusetts-Amherst, beginning at 4 p.m.