WESTFIELD – McDonald’s advanced to the 2015 City Cup Championship to cap a Wednesday where the regular season’s top two seeds were upset, but it took quite the gutsy performance.
Playing with eight players for a majority of the game, the No. 3 seed obtained full strength in time to break the game open, then survived a late Sons of Erin rally to defeat the regular season champions, 5-4, to advance to Saturday’s final.
“A win’s a win,” said McDonald’s coach Bill Lamirande. “It was a very gutsy win not having everyone here. (Sean Murphy) gutted it out until the third out and the whole team gutted it out. Liam Whitman had the huge bases-clearing triple and now we relax until Saturday and we see who we play. We’re in the driver’s seat right now.” 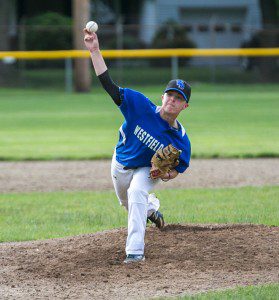 Liam Whitman provided the offensive spark for the visitors, driving in four of the five runs, including a three-run double in the sixth inning to put McDonald’s ahead 5-1. The bottom of the lineup started the rally; Chris Torres was hit by a pitch and Anthony Clark and Murphy both walked. After Nick Clegg grounded into a fielder’s choice, Whitman smacked the three-run double to the gap in left-centerfield.
Matt Masciadrelli drove in the first run for McDonald’s, shooting a single to score Clegg in the third inning. The starting pitcher from Westfield Technical Academy also scored the second run for the visitors on Whitman’s RBI single in the fourth inning.
Clegg earned the win on the mound, throwing four innings of five-hit ball while allowing just a single run in the third inning and striking out four Sons of Erin batters. Murphy closed out the game, pitching the final three innings and stopping the Sons’ threat with the bases loaded.
Down 5-1, Sons of Erin’s offense threatened in the final inning, scoring three runs on two hits and a couple wild pitches. Noah Murray and Cam Niemiec reached on infield singles and Tim Hurley loaded the bases on a hit-by-pitch. After Ryan Towle walked in the first run of the inning, wild pitches brought in Niemiec and Hurley, but Murphy settled down and struck out Sean Moorhouse before forcing Brian Campbell to fly out to end the game. 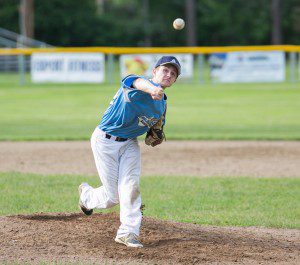 McDonald’s will await its championship opponent and rest until Saturday night. They will play either No. 1 Sons of Erin, No. 4 Westfield Police or No. 5 Westfield Bank. The latter two teams play in an elimination game Thursday afternoon, with the winner facing Sons of Erin in another elimination game on Friday.

No. 5 Westfield Bank started Wednesday afternoon by pulling off the first upset of a top-two seed, defeating No. 2 Advance Manufacturing, 6-1, at Bullens Field.
The designated visitors scored two runs in the first, fourth and seventh innings and stole 10 bases in the game, including six in the fourth inning, to pad a winning pitching performance from Brett Turban.
“Brett Turban threw a great game for us,” said Westfield Bank Head Coach John Bonini. “We got exactly what we were hoping for out of him. We certainly have the arms to come through (the consolation bracket). If we play defense like we did today, then we’ll keep stringing wins together.”
Turban earned the win on the mound behind five innings of four-hit baseball, allowing one unearned run in the first inning and striking out four Advance batters. After cruising through the first three innings, Turban ran into trouble in the bottom of the fourth inning.

Shaun Gezotis (right) and Stefan Kroll (center) both make a move at a ground ball as a Westfield Bank baserunner eyes down the play. (Photo by Liam Sheehan)

After Nate Boucher and Shaun Gezotis singled to start the inning, Turban struck out Josh Adams before forcing Steve McKenna to fly out to second base. After an infield single loaded the bases, John Daley threw out the lead runner at home plate to end Advance’s lone threat of the game after scoring in the first inning.
Ryan Porter led the Westfield Bank offense, finishing the day 2-for-2 with a walk and a two-run single to plate both runs in the fourth inning to extend the lead to 4-1. Michael Pacheco and Matt Hastings each added RBI singles in the seventh inning to add more insurance runs.
The visitors jumped out to a 2-0 lead after one-half inning on two more RBI singles. Turban helped himself by driving in Nate Bonini, who reached on an error, with two outs. Two batters later, Devin Baker drove in Turban on a single to centerfield, but John Daley was thrown out at third base to end the inning.
Westfield Bank advances to its second consecutive game in the consolation bracket in as many days Thursday, when it faces No. 4 Westfield Police at 6 p.m. at Jachym Field behind Westfield Technical Academy.