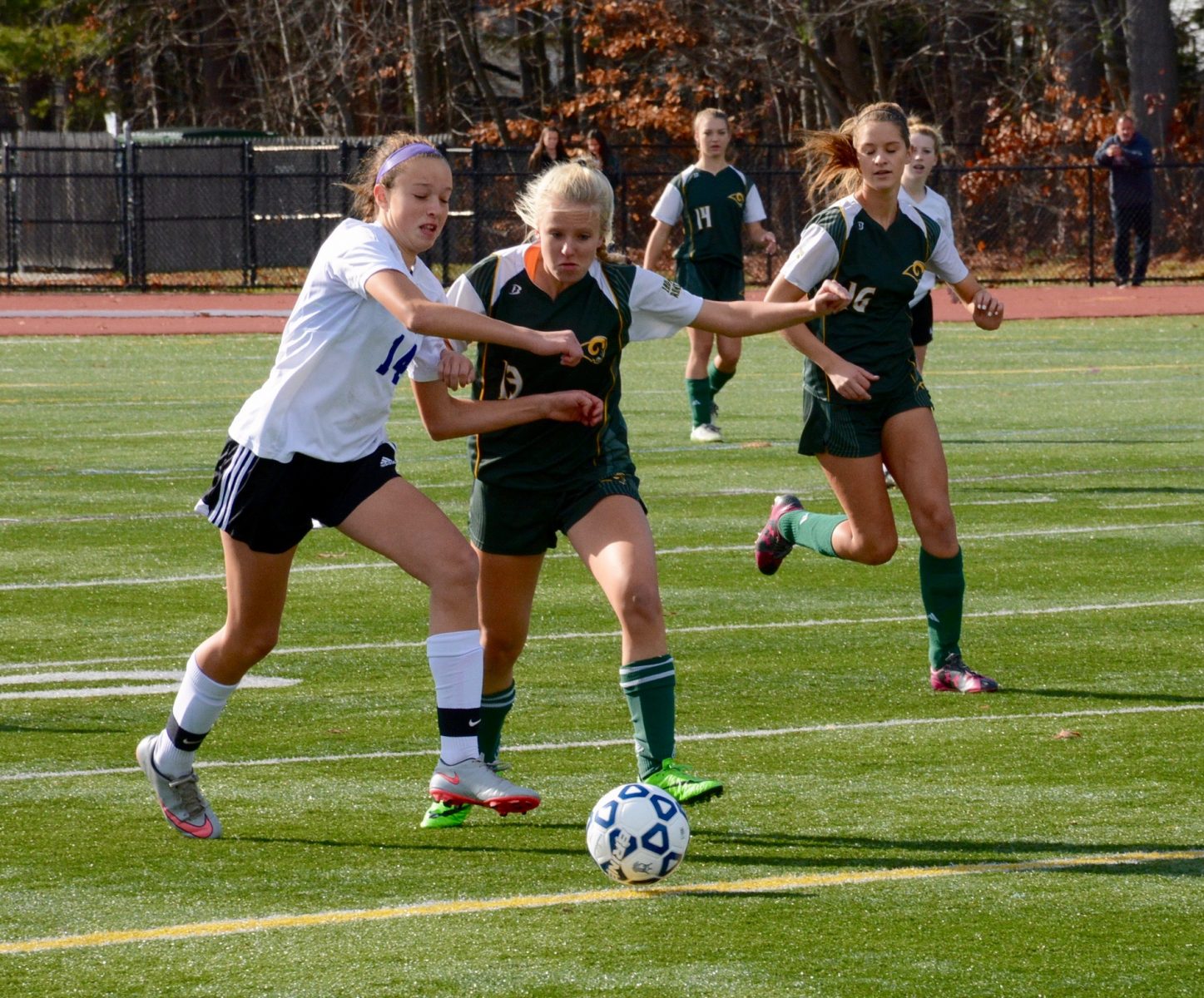 WESTFIELD – Around mid-afternoon Sunday, the Rams could be seen celebrating a championship in Division 3 girls’ soccer at Westfield State.
Depending on which side of the stadium you sat, that was either a good thing or a bad thing.
The No. 1 Granby Rams scored early and scored late to defeat the third-seeded Southwick Rams 2-1 in the MIAA Girls’ Soccer West Division 3 championship.
Granby (19-0-2) exploded out of the gates against Southwick (11-8-1), scoring a goal in the opening minutes of Sunday’s MIAA Girls’ Soccer West Division 3 championship. Kate Sarnacki chipped it into the far post from about 15 yards out in the second minute to seize a quick 1-0 advantage. 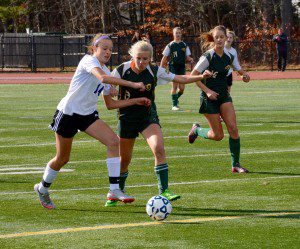 “(Our players) were a little shocked,” Southwick coach Todd Downie said, “but nothing out of character.”
The early goal did not deflate Southwick.
Southwick pressured Granby, driving the ball deep into the box several times, and even firing a bullet at junior goalie Brooklyn Baran, who corralled the ball. The hometown Rams finally tied it up with just under two minutes remaining in the opening half.
In the 39th minute, freshman Brooke Waitt came off the bench to tie the game at 1-all, taking a short pass from Lydia Kinsman and tapping it past the diving keeper with her right foot.
“I turned and shot it, and it went in,” said Kinsman, who admitted to spraining the same foot earlier in the season. “That’s my weaker foot too.”
It was Kinsman’s first goal of her high school career.
“I was really, really, really happy,” Kinsman said. “It gave us more confidence.”
The newfound confidence resulted in a few more opportunities, but failed to translate into a score.
With 12:48 remaining in regulation, Granby regained the lead with the game-winner when Alicia Frappier hammered home a score out in front of the net.
“Nobody jumped in (to break it up) and they scored,” coach Downie said of the penultimate goal.
Granby broke up a strong run by Southwick in the closing seconds, and turned away a corner kick to preserve their undefeated season and a championship victory.
“(Granby) moved the ball a lot better in the second half, creating chances,” Downie said. “They put us on our heels … They have some really talented girls from front to back. They haven’t lost a game. That means something.”
Downie said he was especially pleased with the effort of Kinsman, Southwick goalie Tori Richburg (10 saves), and his team’s ability to silence Granby’s top scorers (for the most part).
“We kind of shut down their top girls,” Downie said. “Their role players stepped up; that’s what happened.”
Still, the Southwick head coach praised his team for being just that all year – a T-E-A-M.
“Our girls are all very close,” Downie said. “They support each other, cheering for each other. They stuck together and kept working. Thankfully, that led to the equalizer to make it an exciting game.”