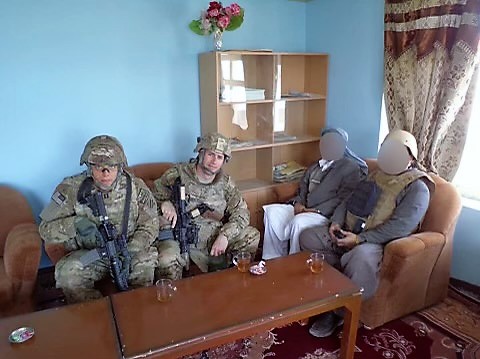 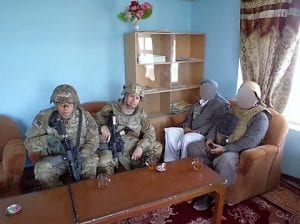 State Sen. John C. Velis, a U.S. Army Reserve major, is pictured in the Zabul courthouse for the first prosecution of an insurgent in Afghanistan during a deployment where he helped establish rule of law. The faces of Afghanistan officials have been blurred. (JOHN C. VELIS PHOTO)

WESTFIELD – As state Sen. John C. Velis, watched the attack on the U.S. Capitol in Washington, D.C. Wednesday, he was taken back to his deployments to Afghanistan.

Thousands of people descended on the Capitol lawn and extremist supporters of President Donald J. Trump interrupted the confirmation of President-elect Joe Biden Wednesday afternoon, breaching the Capitol building and the Senate chambers. On Thursday morning, four people were reported dead from the violence, including a woman who was shot inside the Capitol building.

The events unfolded live on television and social media. Velis, a U.S. Army Reserve major, said he thought of the mantra of his first deployment to Afghanistan in 2012: “Yow mumlakat, bey la qanoon tsacka de dzangal haysiat laree,” which Velis said is an old Pashtun proverb that means “a country without law is a jungle.”

Velis, an attorney, was deployed to Afghanistan to help establish rule of law. He said what he saw in Washington Wednesday was similar to what he saw in Afghanistan – people who no longer believed in their government resorting to violently taking matters into their own hands.

With a lack of leadership, the Taliban rose to power in Afghanistan. Citizens had nowhere else to turn.

“The Taliban, in a way, filled that void. This is what happens when people take matters into their own hands,” Velis said.

While establishing rule of law there, Velis said the Taliban took action against anyone it thought was supporting a new government and they worked to counteract any communication to citizens. Velis said he and the task force set up a radio program and invited the attorney general and other officials to encourage people to vote for a new president.

To prevent voter fraud, Velis said everyone who made it to the polls had a finger marked with ink to show they had voted. Unfortunately, many had that finger cut off by the Taliban.

“For those who voted, it was extremely important, and they risked their lives,” Velis said, noting that many citizens were kidnapped while on their way to the polls.

Following the election of President Ashraf Ghani, his opponent Abdulah Abdulah cited fraud, votes cast by the dead and other complaints that mirror the 2020 U.S. election.

“He would not accept the results,” Velis said of Abdulah, who was eventually named prime minister to keep the peace and continue the momentum of the rule of law.

Velis said he was present at the first court case in Zabul Province where the first prosecution for insurgence took place. He said the Capitol attack was a step backward for America.

“The very heartbeat of democracy was attacked,” he said. “There is a lack of faith in the rule of law, and that’s one of the first signs that a nation is imploding.”

Velis said while watching the live coverage, he wanted to see what other countries, such as China and Russia, had to say about what was happening.

“They were laughing at us,” he said. “When we get laughed at as a nation, it’s a bad, bad thing.”

Velis said the country now has a “real opportunity to conduct introspection and think long and hard” about the future.

“If you go back and look at the greatest empires, states and countries of the world, one thing they have in common is they were not defeated from abroad, they collapsed from within.”

Velis said he was proud that those elected officials who spent much of Wednesday hidden in offices, under desks and chairs but ready to fight back if necessary, came back together at the end of the day to finish the work they had started.

“The most important thing was for them to get back to do the job they’re supposed to do,” he said. “Hats off to them.”