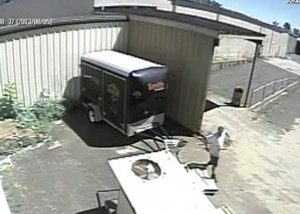 After a security video of two thieves stealing parts of a central air conditioning system from a city business was aired by a local television station, area residents identified the men and their van. (Courtesy WGGB)

WESTFIELD – Two men who allegedly partially disassembled a commercial central air conditioning unit, during business hours, to steal valuable metal to sell as scrap have been arrested and arraigned.
Westfield Police Detective Brian Freeman reports that workers at the Mestek Corporation office on Westfield Industrial Park Road reported on Aug. 2 that metal had been stolen from the company’s air conditioner unit and Freeman found that a record of the theft had been captured by security cameras which showed images of two men with a white van entering the exterior unit and removing parts of the air conditioning system.
Three days later, on Aug. 5, a similar complaint was received from the same location and, again, the same white van and the same two men were seen on the security video stealing metal.
Freeman found that the same van had been recorded on the security video system from Martin’s Floor Covering on Southampton Road leaving the company property where scrap metal, including the arm of a larger street lamp type structure, had been stolen.
Despite high quality video images, Freeman was not able to identify the suspect but, after the video was shared with local television station WGGB, and aired on their newscast, area residents called Freeman to identify the suspects.
Freeman found that neither of the two suspects were found at their last known address and at both locations the current residents said that they were not welcome. The residents did not know where the men were living.
With help from members of the public who had recognized the men from their television appearance, and by working with Springfield police, both men were identified and subsequently located.
The first man found, David J. Thibodeau, 44, of 69 Longhill St., Springfield, was arrested and gave a statement to police.
Freeman reports he was able to find that some of the metal had been sold at a Chicopee scrap yard and was able to find the records of the sale.
Paul A. Cunningham, 44, of 104 Jardine St., Springfield, was identified as the second suspect and was found and arrested within days.
The two men were arraigned separately in Westfield District Court.
Thibodeau was arraigned on two charges of larceny of property value more than $250 and two charges of malicious destruction of property valued more than $250 Thursday before Judge Philip A. Contant and was released on $1,000 personal surety pending a Nov. 13 hearing.
Cunningham was arraigned on Friday on the same charges and was held in lieu of $5,000 cash bail pending an Oct. 3 hearing.