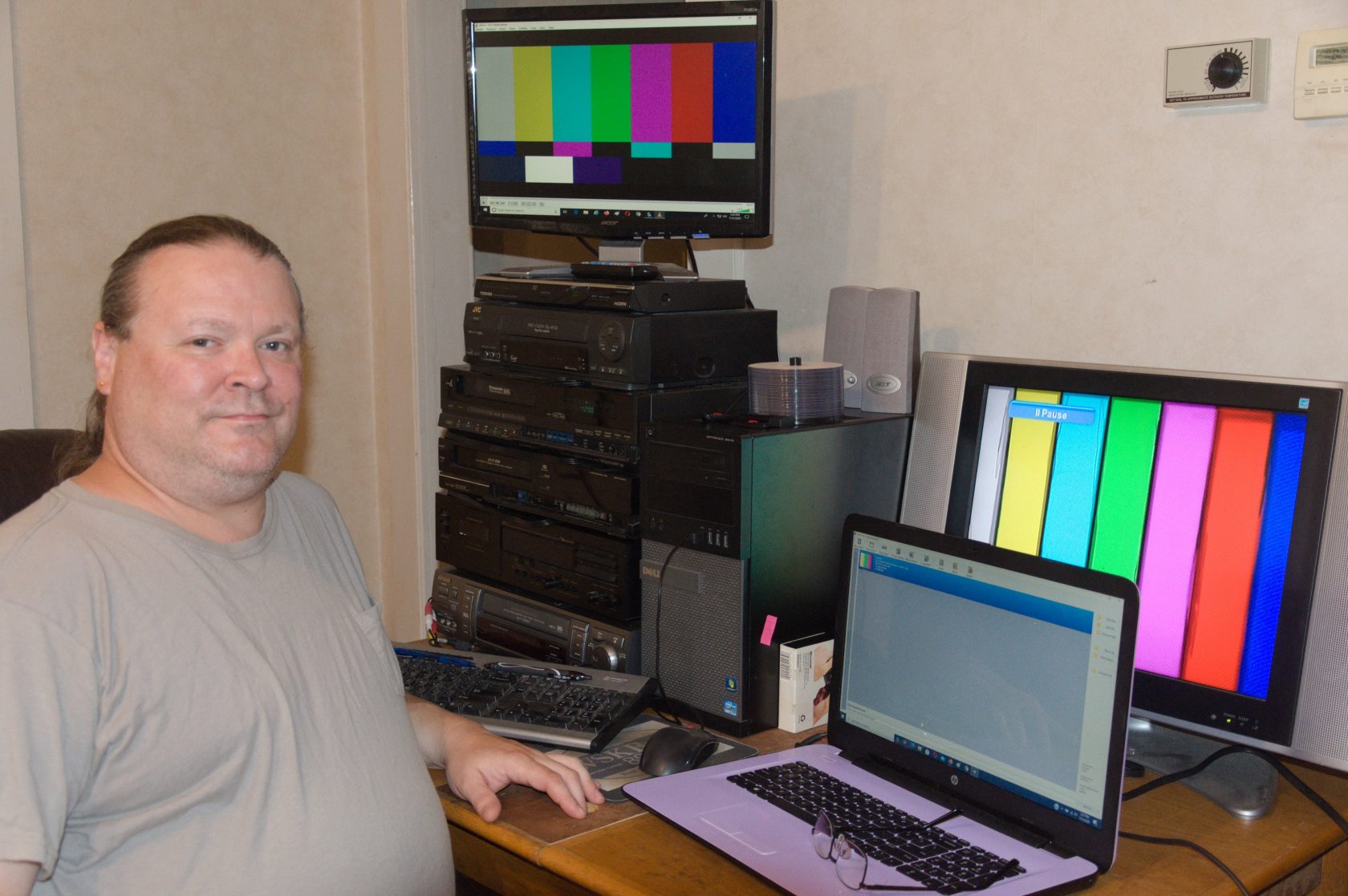 WESTFIELD-The electronics field has fascinated Ken Stomski since his youth.

“I found I could just put something in my hand and figure it out,” said Stomski, who recently started a business – KS Solutions – in the midst of the pandemic.

Stomski said an uncle who repaired televisions gave him some sage advice many years ago.

“An uncle inspired me to take the electronics technology shop at then Voke in the 80’s,” said Stomski. “I graduated with honors, went on to manage several Radio Shack locations, and then left the corporate world due to my hatred of some corporate games they were playing.” 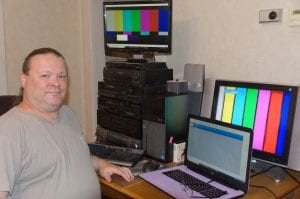 Ken Stomski, who just opened KS Solutions in Westfield, is seen at his work station where he is concentrating on video conversions at this time. (SUBMITTED PHOTO)

Over the years Stomski ran a mobile entertainment company, and in 1996, started working at the Electronics Center in Northampton where he remained until COVID-19 changed the landscape for businesses small and large.

“I was originally only furloughed at the beginning of the pandemic in March,” said Stomski. “About three weeks later, I was on the phone with the shop owner. It was determined that the business would bleed way too much over the next year trying to build business back up to where we were, so the decision to close permanently was made.”

Since Stomski’s original plan before the pandemic was to work “in some way or form” for at least 10 more years at the Electronics Center, he knew he would have to reinvent himself.

“Over several months I worked on several different business models for myself, since I have a specialty trade and I knew I would not be able to find work any time soon,” he said, adding, “I decided I needed to keep doing some of the things I have been doing for years.”

After a couple of weeks of building a website that features all of the services he can offer, he had an “aha” moment.

“It hit me, there are more folks with home movies on videotape who can’t play or watch them then there are people who need a flat panel or CD player repaired,” said Stomski, who then created a “video services” section on his website.

By June 19, Stomski acquired a business certificate at Westfield City Hall and went live the next day.

“Working with electronics is all I have done since 1987,” said Stomski. “I am good at it. But what I am also really good at is converting videotape into a format you can watch today, which is where I am concentrating my efforts right now.”

Stomski, who has volunteered his time for many years promoting the city in a variety of ways, is currently a board member with Westfield on Weekends, a nonprofit organization that sponsors events in Westfield throughout the year. He also hosts and produces a weekly morning drive talk format program, and serves as associate producer with Westfield Community Programming Channel 15.

“For years and years on my radio and television programs, I have urged people to shop locally,” said Stomski. “I decided that if I was going to make a go of it, I am going to make Westfield where I do this.”

While Stomski is currently focusing his efforts on videotape conversions, he has ordered equipment to convert 8mm and super 8 film as well as slides.

“I am the only person in town who is offering this service, and there are only one or two others in Hampden and Hampshire counties that I know of,” said Stomski, adding, he does all of the work at his home.

“Once you hand your precious memories over to me, they do not leave my possession,” he said. “There are a few brick and mortars who offer this service, but they send your tapes out to a fulfillment house in order to be processed.”

Stomski noted there are also services online where tapes can be sent to be converted.

“I don’t know about you, but I would never trust that the original would not be damaged or lost,” he said.

Before Stomski set his service fees, he researched the prices of comparable businesses to ensure his prices came in at the same or below what other businesses were charging.

“I am using higher-end playback decks and devices and converting in real time for optimum quality into a computer,” said Stomski. “I am able to get a tape started and I walk away. I don’t sit and watch – I have no interest in watching your birthday party or holiday celebrations.”

While videotapes of home movies collect dust in our drawers and closets, Stomski said now is the time to not only recapture those memories – but to be able to save them for future generations.

“Magnetic tape, which is what all videotapes are made of, are basically plastic, glue and rust,” he said. “They have an optimum life of 20 years before deterioration of the material starts to degrade the quality of what was recorded.”

Stomski said his service can preserve those memories by converting the contents to a format that the customer can watch today.

“I am able to put those videos on a DVD or onto a thumb drive,” said Stomski. “I have also converted some old audio cassettes into a digital format for a client just this past week. You never know when someone may pass, and you may feel the need to watch those home movies – make sure you can still play them.”

“I hope one day that this venture becomes successful enough that I can open up a storefront or office, but right now I am using my driveway,” said Stomski, noting that during a pandemic, folks can stay in their cars when dropping off their tapes safely since he is following all of the Centers for Disease Control and Prevention guidelines.

“I have been scheduling folks who want to drop something off one hour apart from each other,” he said. “We lock down a time, and I keep an eye out for them. I go outside to greet them and keep a safe distance whilst we talk. Some folks even stay in their cars. Most people are wearing masks, but I do not require it as we can exchange the tapes in a few seconds several feet away from each other.”