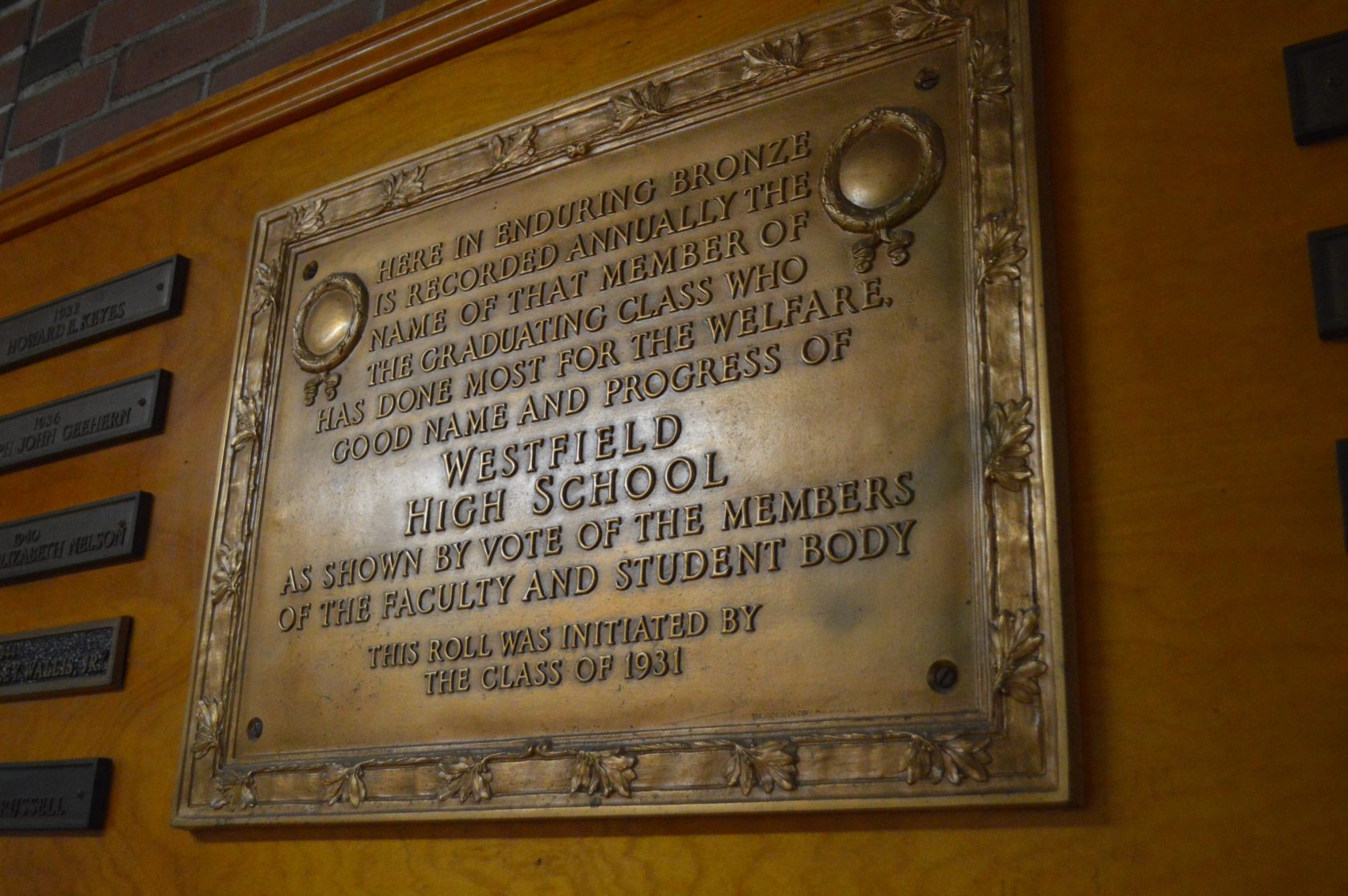 WESTFIELD – Members of the Westfield High School Class of 2020 cast their votes at the end of May for the student most deserving to be named the 2020 Bronze Tablet Award winner.

Twenty-four students were selected as semifinalists and votes were then tallied to reveal the top three finalists, Marisa Clark, Nicolas Stathatos, and Jaelyn Towle. The 2020 Bronze Tablet Award winner will be announced at the Westfield High School graduation ceremony on July 31.
The Bronze Tablet is awarded annually to that member of the WHS graduating class “Who has done the most for the welfare, good name, and progress of Westfield High School.” That student’s name is permanently engraved on a bronze tablet and added to the plaque, which stands prominently in the main entrance to the school near the auditorium. 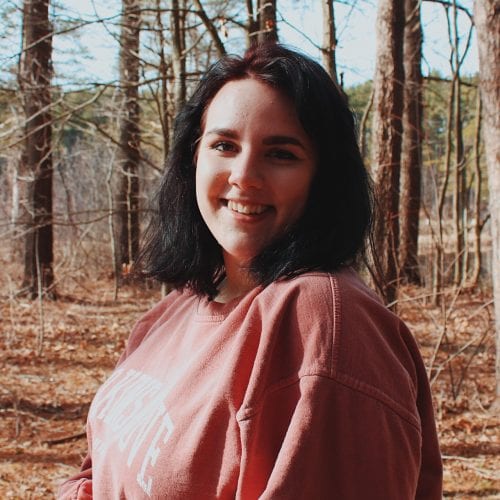 Marisa Clark will be attending the University of North Carolina at Wilmington to major in Special Education. (WESTFIELD HIGH SCHOOL PHOTO)

Marisa Clark will be attending the University of North Carolina at Wilmington to major in Special Education.
“Since freshman year, I have made it my task to be as involved in the school as I possibly can, my goal was always to be president, but until junior year I did not have the opportunity. During this time I took the initiative to support the new chapter of FBLA in Westfield High and placed third for Public speaking in the State of Massachusetts. Our commitment as a club, even just starting out, we connected businesses to the school and emphasized the importance of underlooked classes. This was a very important task for me to promote the welfare of the school as I drove to businesses around town asking for funding and spreading the word for Westfield High, I also spoke at a conference promoting our new Chapter to increase community engagement. I have relished getting to promote the good name of Westfield High through clubs, but truly my favorite way has been as Class President,” Clark said in her statement posted on the school website.
“Upon reflection, I see the best measure of the progress I have made in the school is by the connections between different clubs and groups. It is easy to feel isolated in our interests, but I have made an effort to include art clubs, bands, business classes, choirs and sports teams in Class Office and Student Council Activities. There is a great well of untapped potential in the barriers between groups. I have tried to make the school better by showcasing the skill and recognizing the talent of everyone. Progress is not just one act or one movement, it’s an idea and an action that is continual, progress does not end with our Class, the only way to truly say I have contributed to the progress of the school is to know I have done something that will continue to help the school for years to come, whether my name is known or not. Westfield High will continue without me but the work I have poured my heart into for the last four years will always keep going. Investing yourself into anything like I have invested in Westfield High can feel like a roller coaster, but I would ride it again if I could do even a little more for this school,” added Clark. 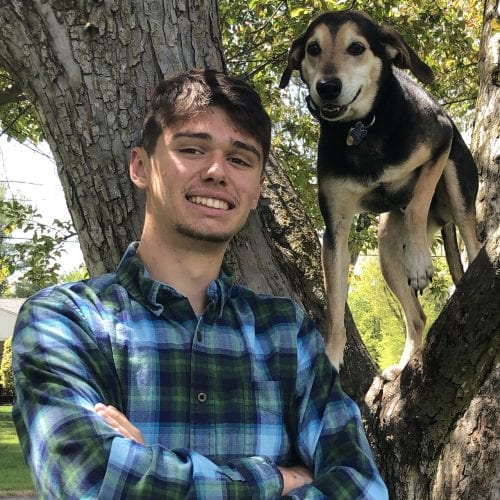 Nicolas Stathatos has enlisted in the United States Marine Corps.

“I didn’t help at the soup kitchen, run cross country, become an Eagle Scout, and all these different things to win an award, I did it because that’s who I am and that’s what I love,” wrote Stathatos.
“I love to learn, but what I remember about high school won’t be the AP classes, the class rank, or my grades. I’ll remember starting cross country my freshman year and making amazing friends, later becoming a varsity runner and captain by senior year. As a freshman, I’ll remember running indoor track and having amazing teachers like Nicole Stratton. I took three or four of her classes during high school. Sophomore year went by quick and I began my Eagle Scout project that fourth quarter. I later became an Eagle Scout junior year. I made it onto the NHS and my friend Aaron and I made a little ultimate frisbee club. Those pickup games of ultimate are worth remembering. I’ll remember balancing a really busy schedule as best as I could and making the decision to join the Marine Corps and serve my country. I’ll definitely remember missing half my senior year and to be honest, I’m not really upset about it, I’m ready for my next chapter.
“I’ll remember these things because this is what I loved. This is what made high school enjoyable. I never thought I’d be nominated for the bronze tablet because I never had it in mind. The things I do to process the good name and welfare of the high school I do because that’s who I am. That’s how my parents raised me and that’s how I decided I want to live my life, not because I wanted an award or recognition. To win would be an honor but the real honor is knowing that I’ve served the school in a positive way and was able to have fun along the way,” Stathatos added. 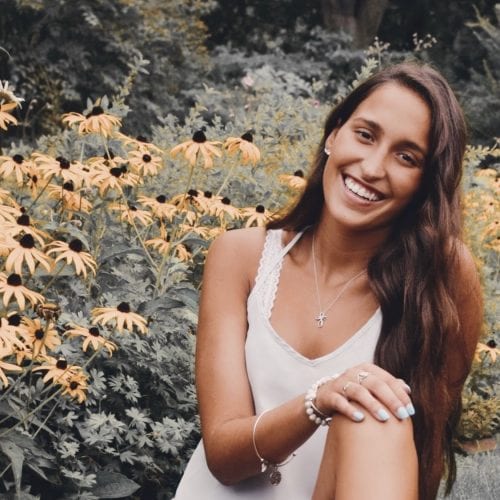 “As a dedicated Secretary of the Class of 2020 and Executive Board member for the Student Council, I humbly accept the nomination for the Bronze Tablet award,” wrote Towle in her statement.

“For all four years at Westfield High School, I have been dedicated to making the school a better place. Every day I would ask myself, `Did I make a difference today? Did I leave someone happier than when they woke up?’ From academics to athletics, and all in between, I have been actively involved in numerous programs. It has been such a great pleasure and honor to be a part of so many of them. According to the Webster dictionary, welfare is `the state of doing well, especially in respect to good fortune, happiness, well-being, or prosperity.’ My many leadership roles, such as class president, captain of the lacrosse team, student leader, representative, along with numerous others, really demonstrate how I have spread good welfare to my peers and staff at Westfield High School. As a leader, my peers look up to me. My resilient, friendly, and outgoing personality gives others the feeling of comfort and happiness. Whether I’m a leader in or out of the classroom, I always make others feel included and welcome in their own school. If someone is sitting alone at lunch, I will ask them if they want to sit with me. If someone is crying in the halls, I will see if there’s anything I can do and let them know I’m here for them. My leadership contributes to the welfare of the school and bettering it as a whole.
“It has been very important to me to carry the good name of the school with me wherever I go. I have honored and respected my actions and decisions, knowing I am a representative of Westfield High School. When I was engaged doing community service and busy with volunteer work helping at a local elementary school, it was always important for me to be a good role model. Knowing I was creating and honoring the good name of Westfield High was important to me.
“Regardless of the outcome, I know I have given my all to this school. Along the way I have made countless friends and have had an amazing experience. Lastly, I would like to say thank you to everyone who has been along my path through this journey. Not only have I bettered the school, but the school has bettered me. The place and the people here are something I will never forget. Thank you for your time and consideration,” added Towle.

The complete list of nominees and their plans for the fall include:

“The Bronze Tablet is a very special award for our school. We normally announce the winner at our Awards Ceremony, but wanted to announce it during our graduation ceremony this year. All of our nominees are amazing and should be proud. It really is quite an Honor,” said WHS Principal Charles Jendrysik.