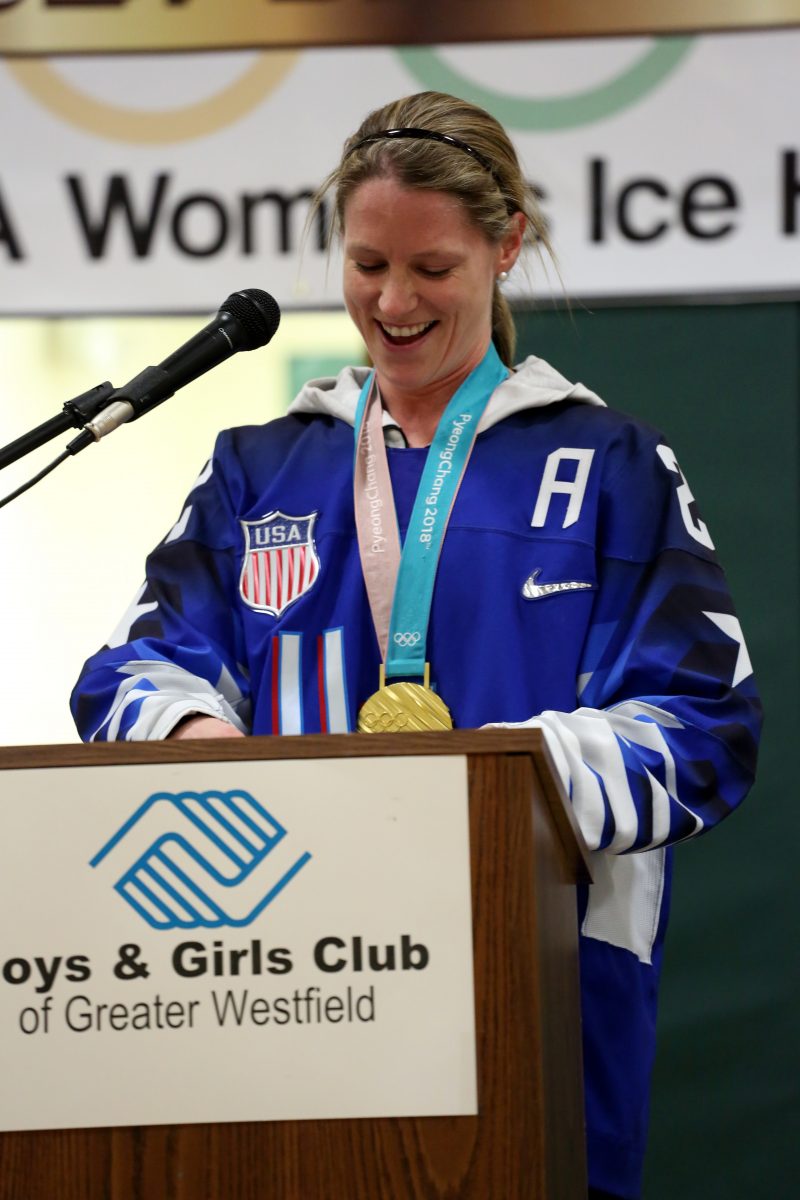 WESTFIELD – More than 500 supportive friends, family members and Westfieldians welcomed Kacey Bellamy home at the Westfield Boys and Girls Club on March 10, a day which Mayor Brian Sullivan has officially named “Kacey Bellamy Day” in the City of Westfield. 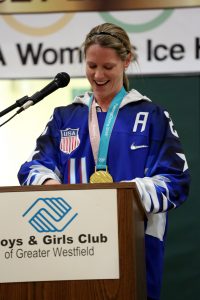 Kacey Bellamy smiles during her speech to more than some 500 community members at the Westfield Boys and Girls Club. (Photo by Randy Burlingame)

A line of families with their children could be seen zig-zagging through the gymnasium as they listened to speeches on Bellamy’s hard work and success, while waiting for their turn to meet the gold medalist and get an autograph.
The dedication displayed by Bellamy and the U.S. Women’s Olympic Hockey Team has not only yielded a gold medal, but it also inspired a generation of newer athletes, especially younger girls. 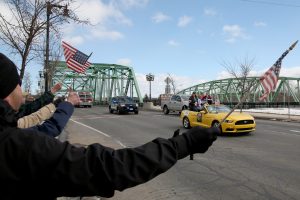 Westfield Police and Fire escort Kacey Bellamy through Westfield as fans cheer from the sidewalks. (Photo by Randy Burlingame)

“Something that I think is as important, probably even significantly more important, is what you have done and continue to do for equality in sports for women,” state Representative John Velis told Bellamy. “Your legacy is still being written. Your legacy is going to be all the young kids, specifically the young girls right now.”
Velis went on to say the efforts Bellamy is putting forth on the equality battlefront will make it so future players won’t have to do the same. 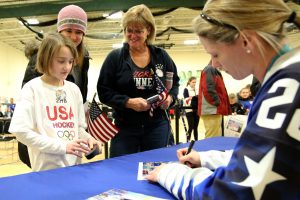 Kacey Bellamy signs a picture and a puck for Kaitlin Roxo as Taryn and Trish Hagar smile and watch. (Photo by Randy Burlingame)

Congressman Richard Neale, Senator Donald Humason Jr. and Mayor Sullivan were all in attendance and spoke similar opinions on Kacey’s importance as a heroine for junior athletes.
“It helps to have an event like this for the young athletes to look up to and have a role model in Kacey,” said Sullivan. “You can already see the energy in young kids.”
The kids waiting in line were unable to hide the smiles on their faces, one of which was Kaitlin Roxo, a young female athlete from the area. 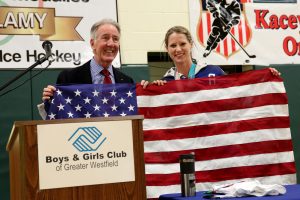 “It makes me feel happy and excited,” said Roxo about seeing Bellamy and what she has accomplished. “I want to try hockey more.”
Roxo typically plays other sports, but has taken a keen interest to hockey since following Bellamy and the women’s team through the Olympics this year.
Bellamy recognizes the impact she is having on the blooming competitors in the Westfield community and ended her speech to the 500 supporters in the gym with a message directed at those with a dream.
“To the little girls that are out there, the little boys out there, that want to reach a dream, do it,” said Bellamy. “No matter what it is. No matter how big or how small it is, just work hard and have a great attitude while doing it.”