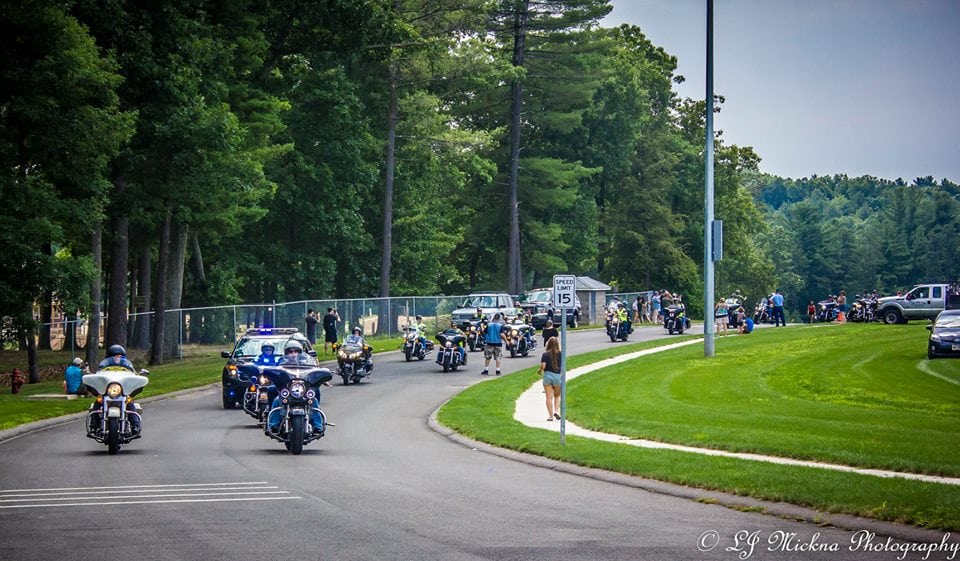 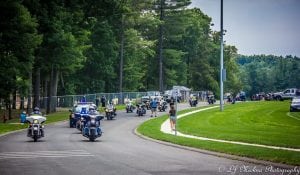 Law enforcement officers escort the participants in the bike ride at a past One Call Away event at Whalley Park in Southwick. (SUBMITTED PHOTO/ONE CALL AWAY FOUNDATION)

SOUTHWICK — One Call Away Foundation, a nonprofit organization that helps military veterans suffering from post-traumatic stress disorder, will hold its annual motorcycle ride, first responders parade and barbecue fundraiser this afternoon in Southwick.

Money raised will go toward the group’s mission to raise public awareness about PTSD and help prevent veteran suicides. The organization operates a hotline — 413-367-8738 — for veterans to call if they are in distress. Several volunteers trained as crisis interventionists are available to handle calls.

During the past six years, Southwick’s David Sutton, founder and president of One Call Away, said the organization has helped “hundreds” of local veterans in Western Massachusetts who are struggling with psychological problems brought on by PTSD.

“It’s hard to give a specific number, because we’re an anonymous organization that holds many private talks and discussions with veterans,” said Sutton, a former Army infantry veteran.

The fifth annual ride and barbecue at Whalley Park on Powder Mill Road is a major fundraiser for One Call Away. Sutton said that since its founding, he estimates the charity has raised more than $75,000. One Call Away, originally founded in Southwick, works out of office space at 104 Ramah Circle South in Agawam, donated by Optimum Parts Co.

The organization also has been successful in getting much of its operating costs donated, as well. This keeps expenses to a minimum, so nearly all money raised is used to help veterans. Chris Sassarone, secretary for One Call Away, said while the group’s primary mission is to help vets deal with PTSD, it also provides financial assistance to veterans.

“If they get into a temporary situation where they need help, we provide them with some relief until they can get their lives back on track,” she said. “This could be a recent veteran or someone who served in Korea. We help all veterans, regardless of when or where they served.”

She added that One Call Away doesn’t hand out money. Instead, it purchases gift cards from stores that are used for specific needs, such as food, clothing or gas. If a veteran is behind in rent or a utility bill, money is paid directly to the utility or landlord.

Since One Call Away works closely with first responders to help to prevent suicides, Sutton said there will be a special first responders’ parade Saturday afternoon at 1:30. It will start at Gristmill Plaza and end at Whalley Park. As first responders enter the park, people will line the entrance holding signs thanking them for their work. He added that any first responders wearing uniforms at the event will receive a free barbecue meal.

Prior to the BBQ, there will be a morning bike ride that will leave the park at 10:30. The 70-mile ride, with a police escort, will return to the park around 1:30. The barbecue starts at 12:30 and includes pulled pork sandwiches, barbecue chicken, Southern-style coleslaw and smoked baked beans.

There will also be a beer tent set up at the park. A live contemporary country music band, Gentleman Jack Band, will play ’60s music, blues, and classic rock between 12:30 and 3:30.

This is the first year One Call Away has held its barbecue and ride in September. It didn’t hold the event last year because of COVID-19 restrictions, but in previous years it was held in July. Sassarone said it was changed in hopes that cooler weather would make the ride more comfortable for motorcyclists wearing leather jackets and boots.

“Two years ago, almost no one came because it was 104 degrees. People were being advised to stay indoors because of the excessive heat. We never know what kind of a turnout we will get, but we’re hoping this change will bring more people to our BBQ,” she said.

The barbecue costs $10. To participate in the ride, the cost is $25 for riders and $15 for passengers. More information about One Call Away can be found at onecallawayfoundation.org.