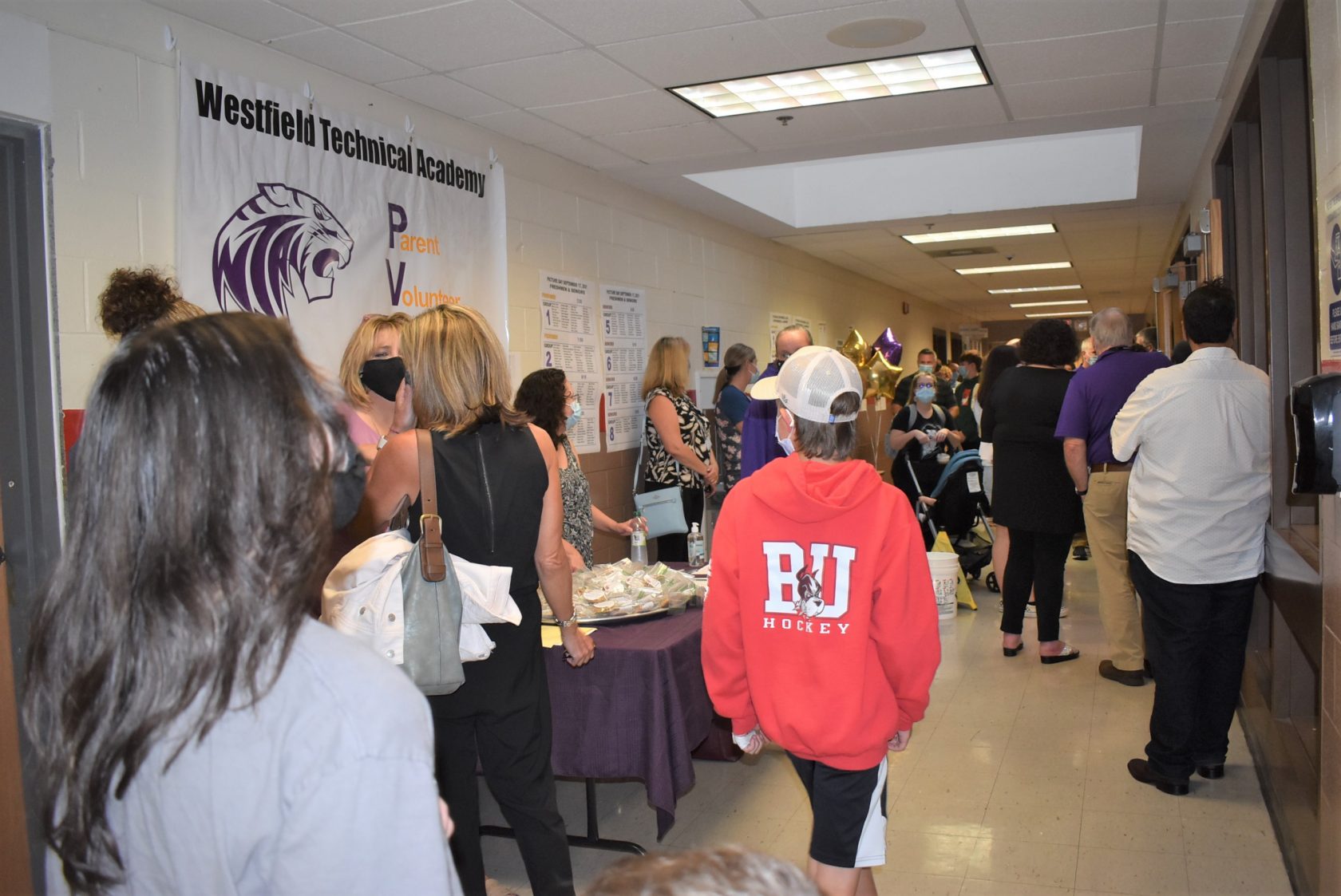 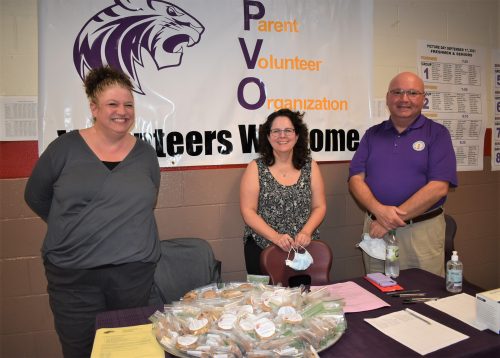 WESTFIELD — Westfield Technical Academy’s freshman orientation and barbecue was hopping on Sept. 16, with Culinary Arts students busy cooking in the courtyard and serving the buffet line in the cafeteria, and other groups seeking to recruit members in the hallway.

Girls soccer players, for example, were looking for freshmen for their team. “We need freshmen — we only have two,” said senior Melanie Chase.

Kimberly Deome and Liz Falcetti of the Parent Volunteer Organization were bribing parents to join by giving away free cookies at their table, joined by WTA Principal Joseph Langone. 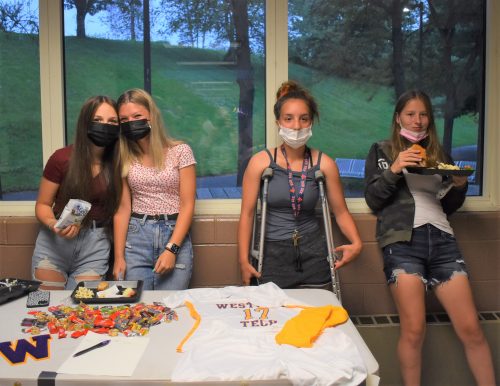 Langone said the orientation was canceled last year, as were all assemblies, and replaced by a virtual orientation and small groups of 12 to 15 students in the freshman exploratories. This year, the full class of 150 freshmen is starting a little more normally, except for wearing masks when not eating or outside.

Langone said from the first day of school until almost Christmas break is the exploratory period for freshmen. They have already completed a mandatory two-day safety training, and are currently doing one-day rotations in all 12 shops, which is required by Chapter 74 of Massachusetts General Law. 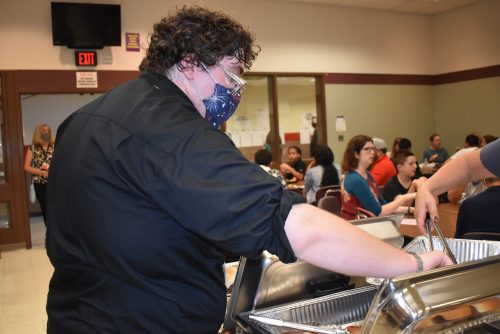 Freshmen will then choose four shops, and a week in each of the four. At the end, the scores are aggregated and admittance is based in part on the final score. Decisions are made mid-December.

“The last couple of years, the staff did an amazing job. The largest number of students got their first choice, 96 or 97 percent. The remainder got their second choice.” Langone said, adding, “That’s all interest-based, other than scores.”

Langone said the popularity of different shops may ebb and flow, but regardless of what’s hot, it’s all about the ability to funnel kids into where they want to go. For instructors, the one-day exploratories are an opportunity to sell the shop. 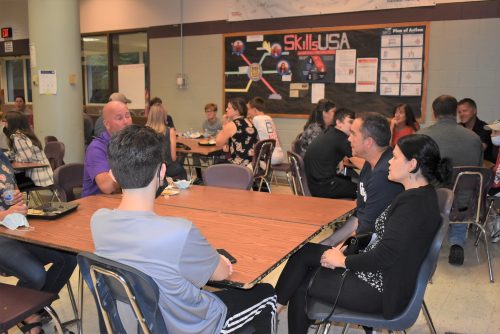 “For the most part, kids come in with a pretty solid idea of where their interests are,” Langone said, but added that it’s exciting when they come in with one interest but then graduate from something “wildly different.” He has seen girls come in looking at a more traditional career choice, for example, then go to the one-week manufacturing exploratory and get hooked.

“I talk to seniors who say, when I was a freshman, I thought I was going to do this — but look where I am now,” Langone said. 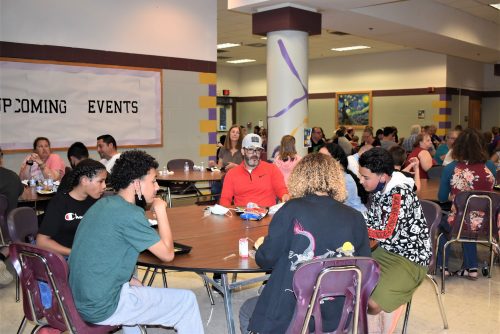 Though the second part of the freshman year is still technically exploratory, allowing some students to transfer to another shop if there is a slot available, it becomes harder over time. In some shops, such as Aviation, it becomes impossible, because students won’t be able to make up the hours required by the Federal Aviation Administration curriculum, Langone said.

Allied Health Department Head Maureen Baillargeon was also in the hall at orientation recruiting for SkillsUSA, a national education association serving all trade, technical and skilled service students. She said their SkillsUSA chapter is already up and running, lining up community projects. 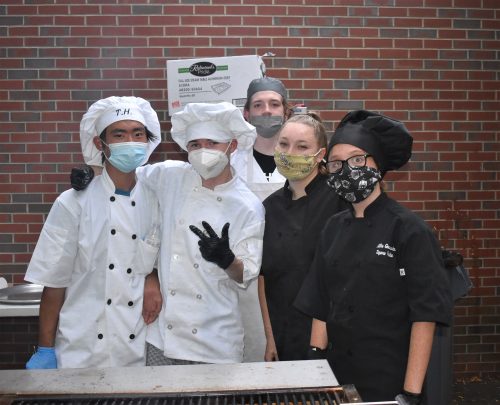 She said this year they will be helping with Sand for Seniors with Council on Aging Director Tina Gorman, with Horticulture department head Nate Sperry helping with the sand buckets. SkillsUSA students will also be helping with Wreaths Across America and the Cancer House of Hope Luminaria.

“We’re ready to roll and get back out there helping the community, trying to fit in with the new norm,” Baillargeon said.

She was also happy to introduce the new Allied Health instructor Angel Arenas Nieves, after being short-staffed last year.

“We’re excited that the nursing homes and Western Mass. Hospital are letting us back in [for training],” she said. 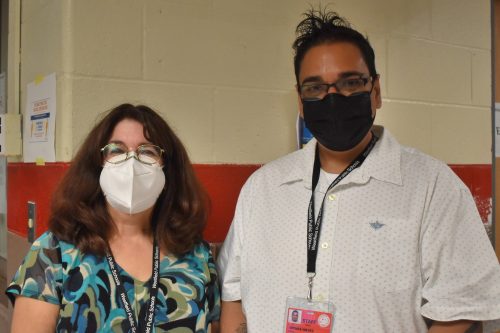 Baillargeon said some Allied Health students are working in co-ops in nursing homes with positive COVID-19 patients now. She said the students wear their KN95 masks and are vaccinated.

Vaccinations are required for all Allied Health students, not by WTA, but by the nursing homes they work in, with no exceptions, Baillargeon said. She said students also have to be tested per the facility’s requirements — a reminder that not everything is back to normal.