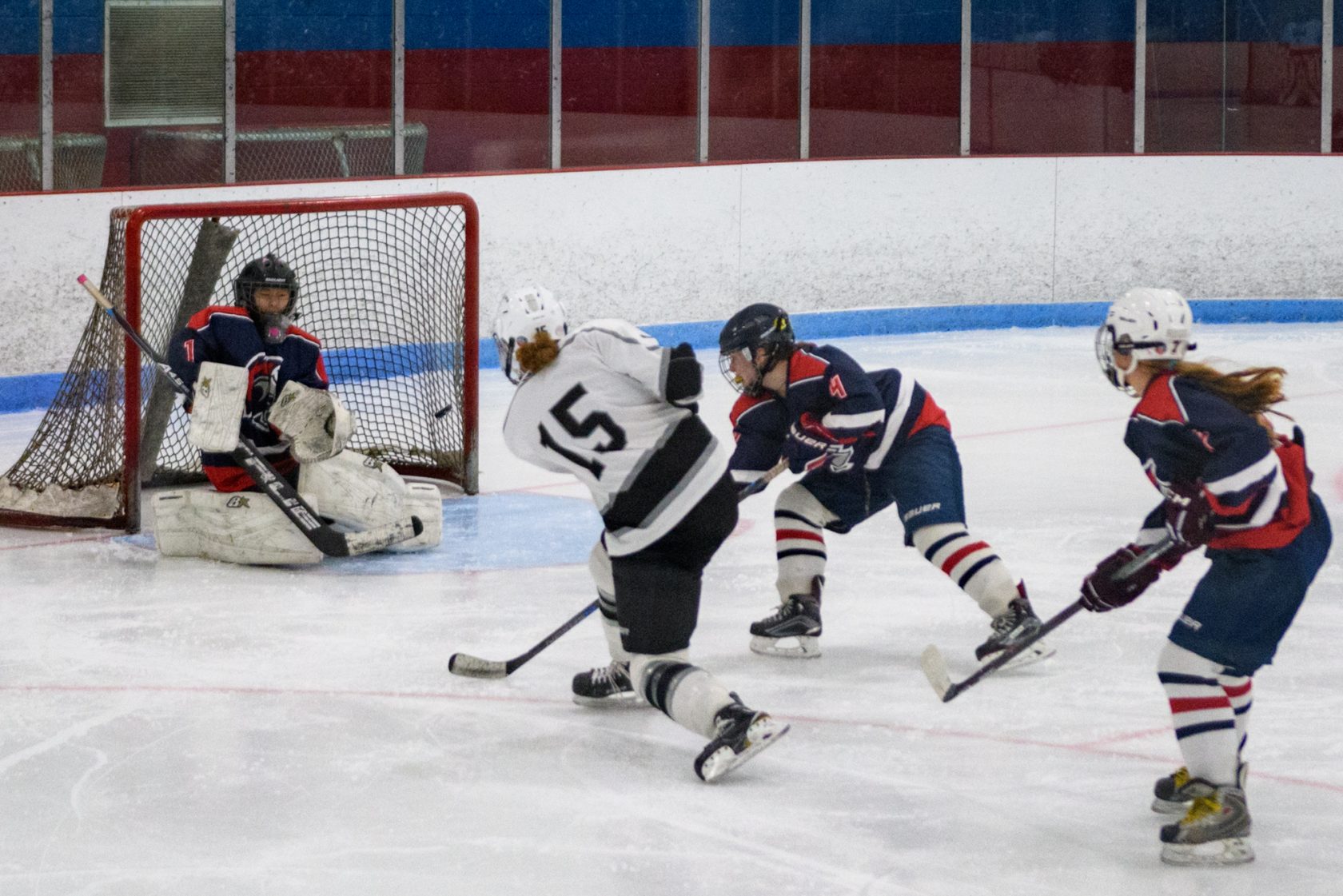 WEST SPRINGFIELD – A first round tournament game – and their first few goals of the postseason – proved to be well worth the wait for the Longmeadow (Westfield co-op) High School girls ice hockey team.
After playing a scoreless tie for the first two periods, No. 7 Longmeadow scored two goals in a one minute, 32-second span en route to a 3-0 shutout of No. 26 Brookline in a state Division 1 preliminary round game Wednesday at the Olympia Ice Center in West Springfield.
“We just came out strong in the third period,” said Longmeadow’s Jordan Kowalski (Westfield). “We knew we had to score to win, and we all just worked together and popped three in.”
Ashley Barron corralled the puck from Madison Fox off the board, handing it to Kowalski, who skated toward the goal untouched on the breakaway. Kowalski leaned toward her left and wristed it in with 12:38 remaining.
“Ashley handed it to me and I just came down … and sniped it,” said Kowalski.
Longmeadow’s towering center, Brigitte Goeler-Slough, who had several chances either get broken up by the last line of Brookline’s defense or swatted away by goalie Caroline Davis (19 saves), had a second-period shot clang off the post. But 1:32 after Kowalski figuratively broke the ice with the game’s first goal, Goeler-Slough launched a short-range shot in between a crowd of defensemen out in front of the goal that found the back of the net for a 2-0 lead. 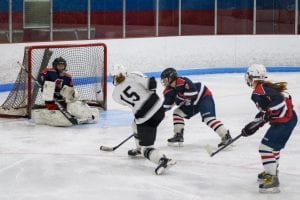 Longmeadow forward Jordan Kowalski fires the puck inside the far post for the first goal of the game early in the third period Wednesday. (Photo by Bill Deren)

“You can always say it – we feel it, we feel it,” Longmeadow girls ice hockey head coach Melissa Vandermyn said. “We’re buzzing the zone. We’re all around the front of the net. Unless you make an effort mentally to put the puck in the net, it’s not going to go. You can physically hack at it all you want. You need to settle. We had two great examples of it.
“Jordan came through the middle, settled herself, took a great shot. Brigitte grabbed that rebound and instead of just firing it back at the goalie, she took a step back, she fired her shot. …It takes a jumpstart a lot of times. I think that goal was a jumpstart like we got one, let’s keep going.”
Said Goeler-Slough: “We knew that the first goal was going to be huge. Jordan had a really nice play, and then we just had to keep rolling from there.” Goeler-Slough also scored an open-net goal with the goalie pulled in the waning minutes of the game.
Longmeadow goalie Kayla Brown recorded a shutout, finishing with 18 saves.
“Every game I just stay in my own state of mind and not let the excitement get to me or anything,” Brown said. “I’m just trying to stay mentally focused. It’s always on the back of my mind that like if they score one, the momentum is going to shift. …I felt it halfway through the second period when we still hadn’t scored anything. You could feel like they were still banging on the doors. I just wanted to stay in there and keep ready.”
Longmeadow’s head coach applauded the efforts of her goaltender.
“There were a couple odd-man rushes in the zone where we got a little overzealous and we kind of pushed a little too hard and got out of position,” coach Vandermyn said, “but Kayla’s always on her game. She comes focused, mentally ready to go. There was one shot from the slot, rebound right to the corner. She knows it can’t come back out front. That diving one she came out and grabbed – she knew that that could be a scrambler and it could be one of those trickling goals so she made it a point to come out, fearless, had to cover it up, had to freeze it and that’s her…. She’s just a leader by example.”
Longmeadow (12-2) advances to the next round where it will next take on the winner of No. 10 Melrose (14-4-2)/No. 23 Masconomet Regional (11-7-2).
“We just need to work together, play as a team and have a lot of fun,” Kowalski said. “There is probably a pretty good chance for us this year so I’m definitely excited.”
Said coach Vandermyn: “I think when you look at our raw talent … and anybody can get intimidated by it but you can have all the skill in the world. If you don’t put it together, it doesn’t really matter. …Not everybody is going to have the same skill level. If they’re all playing the same system and everybody has a role and a job, and everybody does and believes in it, it will work. The whole thing will work.”