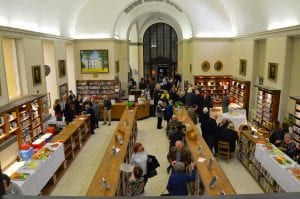 Dozens of Athenaeum donors, supporters, and public figures in Westfield were present for the grand reopening of the city’s library. (Photo by Peter Currier)

WESTFIELD- The Westfield Athenaeum held its Grand Reopening reception Friday evening from 5:30 to 7:30 in the library’s front room after months of renovations to the building.

The Friday night reception was a private event that was invite-only for dozens of donors and those who have supported the library. State Senator Don Humason, State Representative John Velis, and
Mayor Brian Sullivan were among those in attendance. The Athenaeum held a public reception Saturday morning, which was free for all to attend.

“The library never fully closed,” said Dan Paquette, the Athenaeum’s Director, “one-third of the building remained open and the rest was gutted and rebuilt.”

Paquette added that the reconstruction process took about two years. The total cost, according to a chart that was on display listing the major expenses, was $1,676,000. The back entryway was reworked, and two new accessible bathrooms were installed. The children’s room was changed to reduce adult foot traffic for the kid-focused area of the library. New circulation desks were created and installed by John Carlo Woodworking of Westfield.

The only room that was largely untouched by the renovations was the front room by the Park Square entrance.

At the reception, a large sign was on display listing every person who has donated to the Athenaeum. The list had the names of people who donated as little as a dollar to those who had made much larger donations.

The food at the reception was prepared by students in Westfield Technical Academy’s culinary program. It included hors d’oeuvres, chocolate covered strawberries, and deviled eggs.