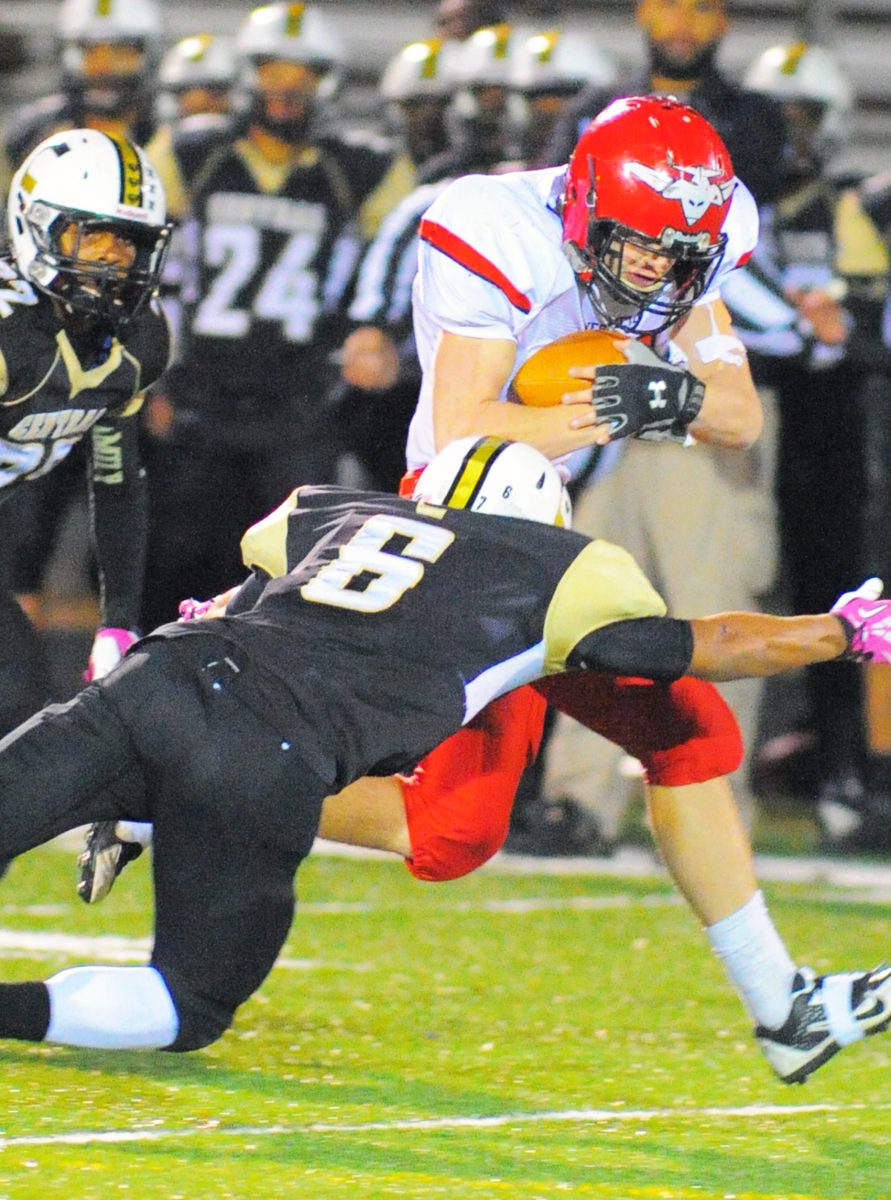 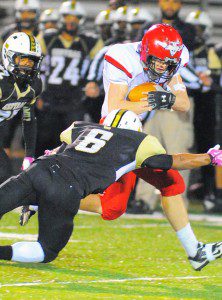 Westfield senior fullback Ben Geschwind plows ahead on this carry against Central in the West D2 football final Friday night in Springfield. (Photo by Frederick Gore)

SPRINGFIELD – Sorry, Westfield Bombers football fans but, yes, lightning does strike twice.
Central’s lightning-quick offense, spurred by dynamic senior quarterback Cody Williams’ electrifying four touchdowns ( 3 passing, 1 rushing), and opportunistic defense (2 TDs), helped the top-seeded Golden Eagles soar past No. 2 Westfield, 44-20, in the West Division 2 final Friday night in Springfield.
Central completed the season unbeaten against Western Mass foes. For Westfield, it was only their second loss, the other having come against the Golden Eagles in the regular season’s final game to decide the AA Conference champ.
Westfield opened the game with a solid game plan, ditching the no-huddle for a slow-down, grind-it-out attack, still with the triple-option as their main threat.
On their first drive, the Bombers drove 73 yards on six plays, capping it off with a one-yard touchdown from Rashaun Rivers on a counter run with 8:17 remaining in the first quarter.
Senior fullback Ben Geschwind set up the score with a 23-yard run to the 1-yard line.
Central quickly cut into the Westfield lead with a touchdown of its own (minus the botched extra point). The Golden Eagles drove 77 yards on 6 plays, and scored on senior quarterback Cody Williams’ 28-yard throw. Williams found Tysean Williams streaking down the center of the field for the quick strike play.
Westfield responded the same way it opened the game, putting together another long drive (70 yards) that ate up a bunch of clock (6 minutes, 3 seconds). Geschwind punched it in from one-yard out with 22 ticks left in the quarter to take a 14-6 lead.
Through one quarter, Westfield controlled the clock for nearly nine minutes. Central had the ball for less than two.
The tide turned in the second quarter.
In the first meeting, Central’s defense stopped Westfield on a key fourth-and-inches play at the goal line late in the first half. The Golden Eagles sprinted out to two quick touchdowns in a less-than-two-minute span, swinging momentum – and ultimately, the game – in its favor.
This time it was a forced turnover in its own end zone that did in the Bombers.
After forcing a punt early in the first quarter, Westfield took over on its on five-yard line. Geschwind ran for one yard on the Bombers’ first play. On the next play, Central senior defensive back DaQuan Clemons pounced on a fumbled pitch in the end zone for a Golden Eagles’ TD. A 2-point run knotted the game 14-all with 7:34 remaining in the first half.
Central was not finished there, scoring touchdowns on each of its next two possessions. A Cody Williams’ TD plunge with 2:15 left in the half, and a 25-yard scoring pass from Williams to senior wide receiver Traveis Dykes in the waning seconds made it a 26-14 ballgame.
In the second half, Central pulled away.
Central began its first possession of the third quarter near midfield. From there it was the Williams’ show as the Golden Eagles senior quarterback willed his team 55 yards to a touchdown.
Williams completed a 25-yard pass on the first play, and after tossing two incomplete passes, scrambled 15 yards for a first down. Four plays later, he threaded the needle to Dykes crossing through the end zone on an 11-yard TD pass on fourth-and-11.
Central scored again a short time later. The Golden Eagles took over on a short field after a turnover on downs, and reached the end zone on Williams’ 14-yard touchdown pass to Luis Ortiz.
Westfield reclaimed one of those TDs with four seconds left in the third quarter on Geschwind’s 1-yard rush. The Bombers trailed 38-20.
The two teams exchanged fumbles on the ensuing possessions, with the latter resulting in a 42-yard fumble return for touchdown from Clemons for a 44-20 lead with 5:46 left.
Central recovered another turnover in the waning minutes.