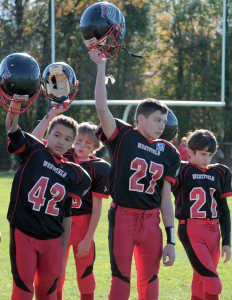 AGAWAM – The Westfield Junior Bombers (6-2-1) looked to bring home a victory against the Springfield 5A (7-1-1) during the 2012 Super Bowl. The Westfield Bomber team captains of Nicholas Barber, Baley Collier, Trot Gosselin and Joey Raco met the opposing Springfield 5A captains at the 50 yard line. The visiting Bombers kicked off to Springfield 5a to begin the game.
Springfield received the kickoff and moved their opening drive down field for a touchdown, but missed their 2 point conversion. After the returning kickoff, Westfield began their offense by moving the ball for 35 yards, but did not convert on 4th down.
On Springfield’s next drive, the Bombers defense tightened up. After allowing a couple few first downs, Blake Tyler caused a fumble that was recovered by Trot Gosselin with less than 2 minutes in the half. Westfield attempted to move the ball with carries of 8 and 9 yard runs by Nicholas Barber and a 38 yard reception by CJ Skribiski, but unfortunately fell short at halftime preventing a score. Westfield took possession to begin the 3rd quarter, but was forced to punt. Springfield 5A was able to score at the beginning of the 4th quarter.
Westfield knew time was running out. The offense constructed a 13-play drive with key runs by Baley Collier, Trot Gosselin and Nicholas Barber to put the ball inside the 10-yard line. Nicholas Barber took the snap and ran the ball outside for the Bombers’ touchdown.
With the score 12-6 and less than 2 minutes in the game, Westfield attempted an onside kick, but were unable to recover to ball. Without the ball or the time to score again, the Bombers began to rotate all of the possible players on to the field to participate during this great Super Bowl. Springfield won 18-6.
Westfield’s offense was led by quarterback Nicholas Barber who passed for 38 yards and rushed for 52 yards on 8 carries, including a touchdown. Running back Baley Collier ran for 47 yards on 5 carries.  Tight end CJ Skribiski had 1 reception for 38 yards. Fullback Trot Gosselin ran for 27 yards on 3 carries. The offensive line is Nickolas Pellegrini (C), Ryan Paro (G), Andrew Pellegrini (G), Johann Schieppe (T) and Brandon Arnold (T). Other notable offense players are Ryan Rix (TE), Mike Nihill (RB) and Mason Collingwood (G).
Westfield’s defense and special teams made great tackles during the game.
The team’s defense was led by Trot Gosselin (LB) who made 10 tackles and a fumble recovery. Nicholas Barber (Safety) made 8 tackles. Blake Tyler (LB) and Baley Collier (LB) each made 7 tackles. Walter Figueroa (LB) made 4 tackles. Nick Clauson (CB) made 3 tackles. Manny Sardinha (CB), Johann Schieppe (NT), Michael Ruta (LB), Mason Collingwood (DT), Nickolas Pellegrini (DT) and Brandon Arnold (DT) each made 2 tackles. Aiden Boyle (LB), Ryan Phillips (CB) and Ian Wilhoite (LB) each made 1 tackle during the game. Other notable defensive players were Kris Meneses (LB) and Ryan Paro (DT).
The coaches thanked all of the players, parents and others for a great season, noting the honor and privilege to have every player work so well together and set the foundation for years to come. The players and coaches are already looking forward to next season.  – Courtesy of Westfield Youth Football