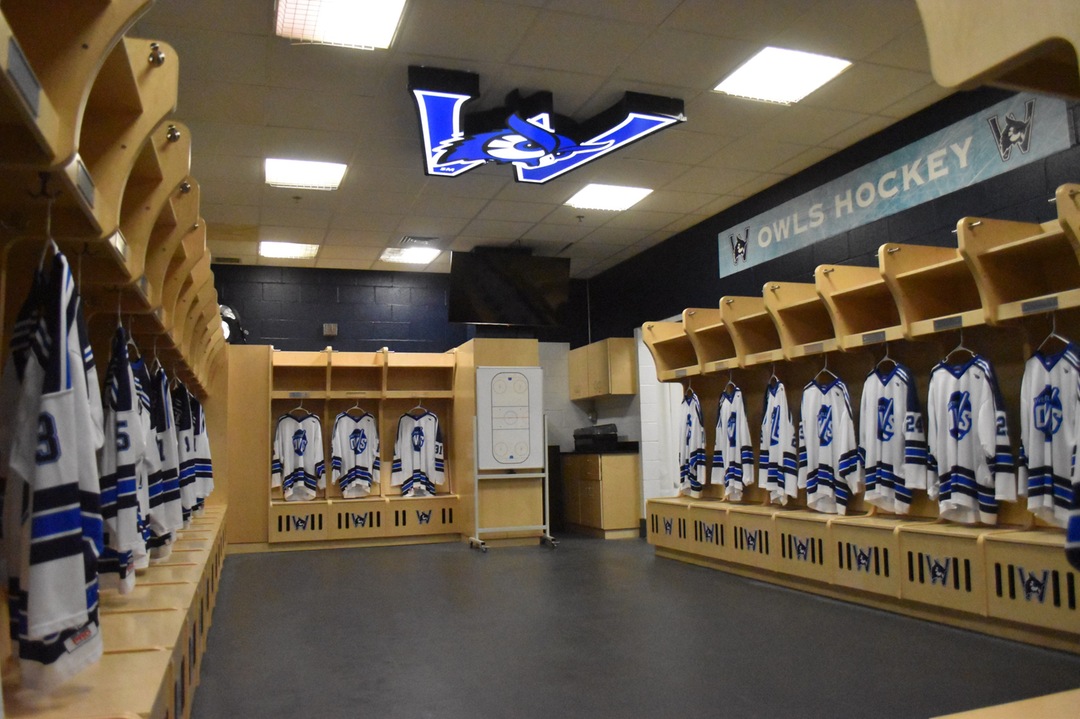 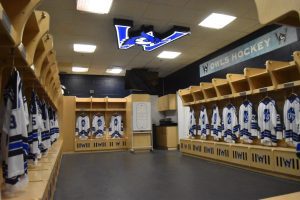 WESTFIELD – Westfield State University hockey has unveiled its newly renovated ice hockey locker room at Amelia Park Arena.
The room was renovated thanks to generous giving from Westfield State hockey alumni, family and friends of the program. Through an extended license agreement with Amelia Park Arena, the project helped to build out an additional public locker room in the facility to replace the space that the Owls hockey team will now permanently occupy.
The room now features professional style wooden locker stalls, with drying pegs and lockable space for each player, new stick racks, storage and workspace, a skate sharpener, and branded logos and graphics representing the history and goals of the program, along with two video screens for film and practice review.
The project was completed entirely with fund-raised monies, as Owls athletics worked in partnership with the Westfield State Foundation, Inc. and Amelia Park.
A donor wall is prominently featured at the entrance to the room to honor the donors who made the room possible.
“Finally getting the locker room completed is both a milestone and another step forward for our hockey program,” said Director of Athletics Richard Lenfest, Jr. “We greatly appreciate the support of the alumni, families and friends that let us build out the room, and the Board of Directors at Amelia Park that worked with us to reach an agreement. We couldn’t be more excited about how the project turned out, and it’s a great launching point for our student-athletes as they head into the 2021-22 season.”
Bradford Builders, Inc. of Huntington, Mass. completed the construction and installation of lockers.
Final details in the room were completed just in time to debut it to the Owls’ 1978 ECAC Championship team, which was back on campus to be recognized as a team of distinction at the Westfield State Athletics Hall of Fame ceremony on homecoming weekend.
Westfield State advanced to the Massachusetts State Collegiate Athletic Conference semifinals in 2020, just weeks before the pandemic began and shut down many collegiate sports for nearly a full year. – Courtesy of Westfield State University