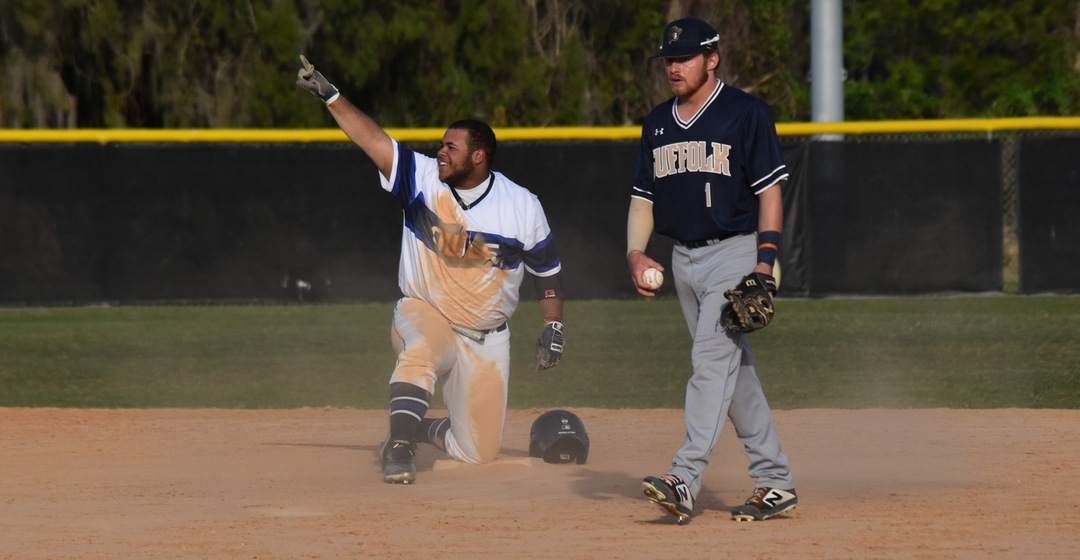 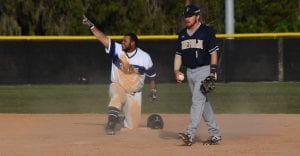 Westfield State’s Jordan Garner signals to his teammates after his RBI double tied game one of the doubleheader against Suffolk University. (WESTFIELD STATE UNIVERSITY SPORTS PHOTO)

LEESBURG, FLA. – Westfield State baseball split a marathon doubleheader with Suffolk University at Pat Thomas Stadium on Sunday evening.
In game one, Westfield rallied for five runs in the bottom of the seventh inning of a scheduled seven-inning doubleheader, to force extra innings at 8-8, before falling 12-8 in eight innings.
Freshman Jordan Garner rapped a double to right center field to plate Zach Graveline with the game-tying run.
Casey Boudreau, Nick Martin and Sean Moorhouse all had RBI hits in the inning, and Brett Dooley added a sac fly to fuel the Owls’ rally.
Suffolk’s Blaise Cormier singled with one out to start the game-winning rally, and eventually came around to score on a walk to Gino DeSimone. Westfield State’s Trevor Edwards took the loss in relief after coming in to work the eighth inning.
Nick Martin finished 3-5 at the plate for the Owls, and Garner, Jacob Butler and Dooley each had a pair of hits.
Rich Gilbride got the win in relief as the Rams scored four runs in the top of the eighth to get him off the hook. Ryan Garton worked a scoreless eighth to close out the win.
The Owls had chances throughout the game but stranded 15 runners on base in the loss.
The game took 3:15 minutes to play.
In the nightcap, Westfield took a 5-4 decision over the Rams. Both teams struck for three runs in the first inning. Westfield scratched together three runs on a wild pitch, a goundout RBI from Garner, and a RBI base hit from Casey Boudreau.
Garner gave the Owls a 5-4 lead in the top of the fifth, driving in Nick Martin from third with an RBI double into the left field corner.
Garton came on for Suffolk (2-3) in the top of the sixth to work out of a 2-on 1-out jam, inducing a flyout from Dooley and a pop out from Martin to end the threat.
Westfield State sophomore Ryan Murphy (1-0) came on in relief of starter Nate Langmeier in the third inning. After allowing an inherited runner to score in the third, Murphy promply worked four straight 1-2-3 innings for the Owls to earn the win.
Parker Brown took the loss for Suffolk.
The Owls played at historic Pat Thomas Stadium for a second straight day. Built in the 1930’s Pat Thomas Stadium was Florida’s first lighted baseball stadium, and played host to the “gas house gang: St. Louis Cardinals in spring training games, and later was the home of the Pirates, Braves, Orioles and Oakland Athletics farm teams, with such notables as hall of gamers Hank Aaron and Rollie Fingers having played there. – Courtesy of Westfield State University Sports