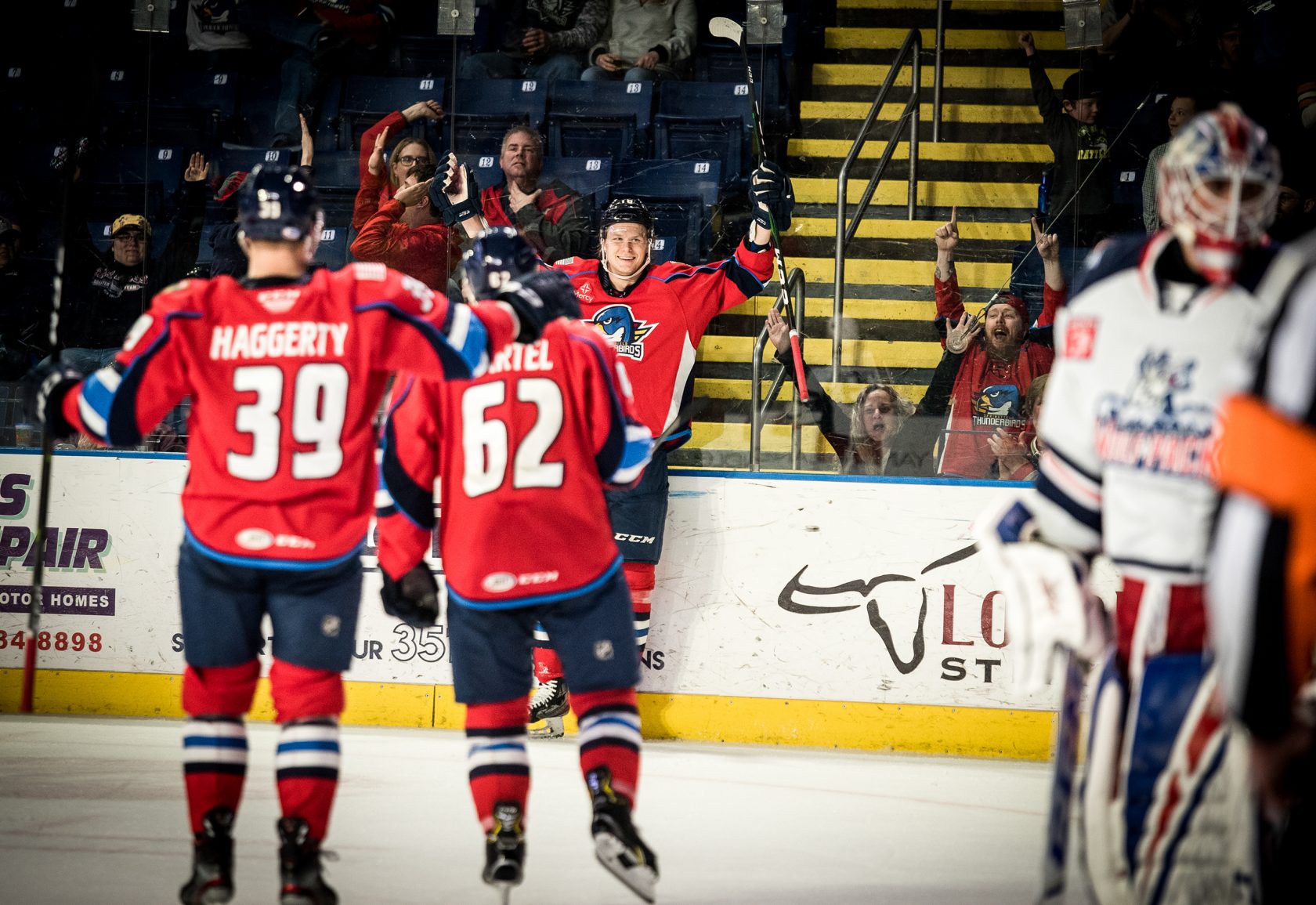 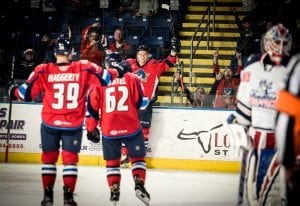 The Springfield Thunderbirds and Hartford Wolf Pack waged a heated battle on the ice inside the MassMutual Center on Sunday. (SPRINGFIELD THUNDERBIRDS PHOTO)

SPRINGFIELD – The Springfield Thunderbirds (31-27-3-0) outlasted the Hartford Wolf Pack (31-19-6-5) in a spirited Sunday afternoon matinee by a final count of 4-1 inside the MassMutual Center.
At the 6:50 mark of the first, after both teams failed on earlier power play chances, the game devolved into a powder keg when Ryan Haggerty and Darren Raddysh wrestled one another to the ice. Moments later, every other skater on the ice picked a sparring partner in a no-holds-barred brawl. By the time the dust settled, Vinni Lettieri and Mason Geertsen of Hartford were ejected, and Brady Keeper received a similar punishment for Springfield.
After the lengthy delay to sort out the mess, the T-Birds finally got to the scoreboard first at 12:40 of the first as Joel Lowry located a loose puck outside the blue paint and knocked it past Adam Huska as he was falling. Rodrigo Abols and Chase Priskie picked up the helpers to give Springfield the 1-0 lead, which stood into the intermission.
After he served penalty time from the brawl, Matt Beleskey emerged from the box only to land back in the sin bin for five minutes when he boarded Will Lochead late in the first period.
Despite having all that man-up time, the T-Birds could not take advantage of the power play, and shortly after killing the duration of the penalty to start the second, Ryan Dmowski got Hartford back even at 3:53 of the middle period off assists from Ty Ronning and Nick Ebert.
On a day when the two teams combined for nine successful penalty kills, the T-Birds finally broke the tie with three final period goals. Priskie scooped up his second point of the night at 6:12 as Daniel Audette found him from the left-wing side after a turnover by Hartford in its own zone.
With the 2-1 lead in tow into the final minutes, Abols added to the lead at 18:15, as a left-circle shot hit the post, then pinballed in off of Ebert to give Springfield a 3-1 advantage.
Danick Martel, who assisted on the Abols goal, then added one of his own with just 34 seconds remaining, his third goal in two games, to round out the scoring. Philippe Desrosiers was magnificent in the T-Birds net, stopping 34 of 35 to pick up his 16th win.
Springfield and Hartford rematch inside the MassMutual Center on Friday night at 7:05 p.m.
For more ticket information or to become a 2020-21 Springfield Thunderbirds ticket package member, or to purchase single game tickets, call (413) 739-GOAL (4625) or visit www.SpringfieldThunderbirds.com.