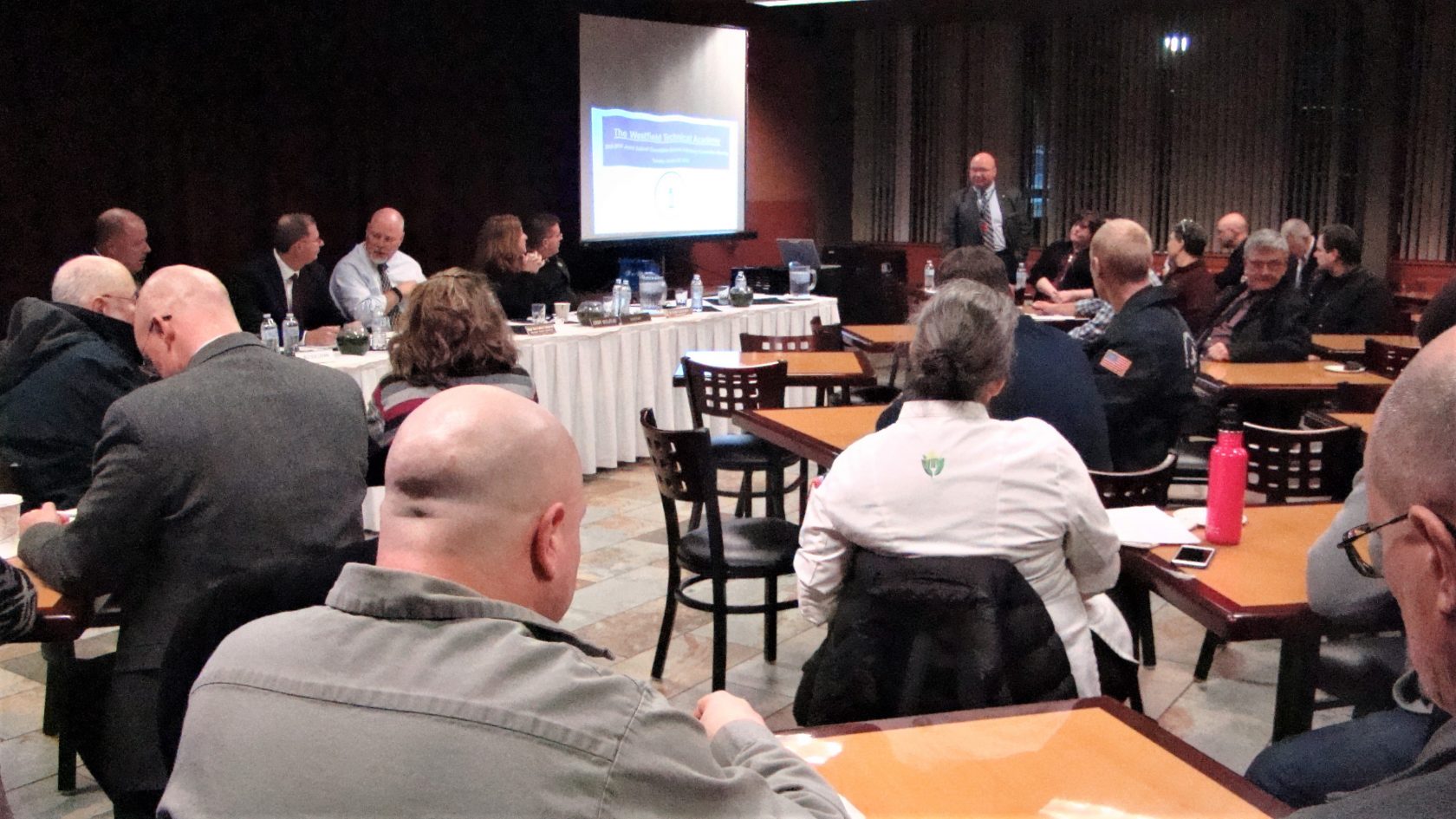 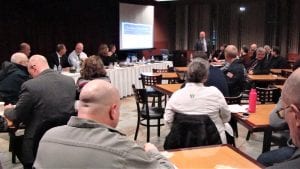 WESTFIELD – Mayor Brian P. Sullivan, Superintendent Stefan Czaporowski and School Committee members held a joint meeting with the Westfield Technical Academy Advisory Board on Tuesday, convening at Tiger’s Pub before breaking into groups to tour the Technical shops. Also joining them were members of the City Council.
During the presentation, WTA Principal Joseph Langone thanked the School Committee and the councilors for their support. “Nothing we do here would be possible without your support,” he said, adding that in his nearly 30 years in education, “This is the finest group of educators I’ve had the experience to work with.”
Some of the highlights pointed out by the principal and his administrative team were improved MCAS scores in math and science, a steady co-op program, a strong mentorship program, increased relationships with area colleges, and new clubs for students, including an early morning workout session, and after-school Anime and Rock and Roll clubs. “Together, with all of these, we’re crushing it,” said WTA Assistant Principal Kevin Daley.
WTA General Advisory Board chair Edward Watson said co-ops are key, referring to cooperative education placements at companies which pay end of year juniors and seniors for work on alternative weeks. “That’s what differentiates this school from anything else out there,” Watson said.
Langone did talk about internal and external suspensions being high, and he said the reason is due to the prevalence of drugs, which he said was exacerbated by the state’s legalization of marijuana. “I haven’t had to suspend anyone for a fight,” he said, adding that the school has a zero tolerance policy for drugs and vaping.
School officials also pointed to an all-time high enrollment of 150, and an increased number of girls in non-traditional programs, including manufacturing and aviation. However, during the tours, instructors and shop advisory board members stressed the need for more room for more students. 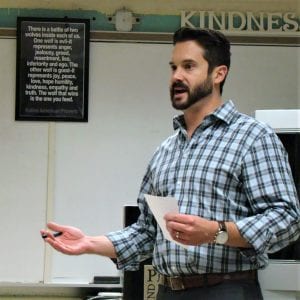 Advisory Board member Jeff Amanti of Advanced Manufacturing spoke about the need for skilled employees. (Photo by Amy Porter)

In Manufacturing Technology, instructor Gary Nadeau said he has 100% placements for the students that graduate from his program, and one-fourth of the students in co-op jobs are from his shop. However, he said they need more students to sign up for manufacturing.
Advisory board member Jeff Amanti of Advanced Manufacturing in Westfield talked about the huge need in the industry for skilled and trained employees. “There are not enough students in this program. We need skilled students going into this trade,” he said.
Nadeau also said the advisory board members raise a lot of the money needed for the manufacturing program, but more is needed to replace high end computers that are getting dated, and to add more CNC (Computer Numerical Control) machines. He said a $250,000 Capital Skills Grant two years ago added eight machines, but another grant is needed. Czaporowski said he is looking for more grants for the program.
One of the issues discussed in several of the shops is the Lower Pioneer Valley Educational Collaborative in West Springfield, which Southwick students are now required to attend for technical training, pulling students from WTA and leading to a smaller group of sending schools.
The group also said that on Wednesdays, eighth graders can come and shadow programs at WTA.

In Horticulture, instructor Nate Sperry said enrollment is up with eight freshmen this year, and 15 choosing Horticulture as their second choice, for which he gave credit in part to a new teacher for the ninth and tenth graders, Michelle Martinat.
Sperry said they recently received a grant to build an artificial putting green in front of the greenhouse, to benefit the physical education and golfing students at the school.
Sperry said they are looking to incorporate environmental technology into the program. DPW Deputy Superintendent Casey Berube said there are a lot of opportunities within the City of Westfield for students in this program, particularly in stormwater management and design.
Sperry said last year’s seniors were placed at Stanley Park, Total Home Services, Stephen A. Polito Landscaping and in quality control at Lane Construction. 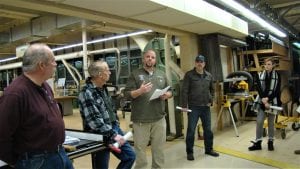 In Construction Tech, Matthew Gomes said the house on Pontoosic St. in Westfield that his students built last year is almost complete, except for a shed in the back yard and a small addition. He said next year, a two family home is scheduled to be built by juniors and seniors on land that was purchased at city auction specifically for the program by Joe Tremblay and David MacIver (WTA ‘1999). Tremblay said they are going through the permitting process, and hope to break ground in the fall.
Gomes said they have received a lot of donations of materials recently from Wright Architectural Millwork in Northampton, as well as siding, skylights and roofing materials from TNT General Contracting, Inc. in Westfield, some of which will be used on the new house building project.
“A lot of really great things are happening in the shop and off campus,” Gomes said, adding, “Now we have some of the best opportunities to put kids in really good paying jobs.” 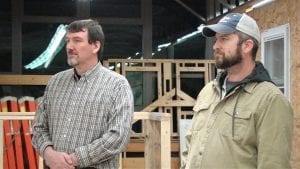 “You have the best kids out of any other trade school. You’re really turning out some quality kids that know what they’re doing,” said Walt Tomala of TNT General Contracting.

In Information Technology, instructor Jeff Richardson explained that they are adding Electronics to their shop, which increases their Chapter 74 programs to three; also including Networking, and Programming and Web development.
They have also created a Red Hat Academy for web-assisted lab-based Linux training. “We’re going to be one of the very first Red Hat Academies,” Richardson said.
The shop also participates in the Air Force Association’s Cyber Security competition “CyberPatriot,” and just finished the state rounds. He said the scores in the state rounds for seniors were 56%, for juniors, 95%, and for sophomores 72%. The team will find out at the end of the day on Wednesday whether they are moving on to the next round for the first time. 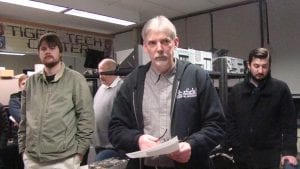 Richardson said thanks to a Perkins Grant, they purchased a professional wireless weather station in the fall that sends parameters to the shop, enabling live work for programming and web development. Data is also shared on Weather Underground. He said they have been recognized with a gold medal from the Weather Channel for their site.
Richardson said they now have three instructors teaching the three Chapter 74 programs, but lost their shop assistant to budget cuts. He said they need to restore the position, to allow the instructors more time to focus on teaching. He also said they need a new HVAC system; theirs is not humidity controlled, and is destroying equipment due to the high moisture content. He said replacing it would be a cost savings in the long run.

After the tours, Mayor Sullivan said he saw a lot that has changed in the programs, and some things they need help with. He said the city is currently working on a plan to expand the Franklin Ave. Elementary School, but next will be a focus on Westfield High School and Westfield Technical Academy. “We’re in the talking and planning stages now,” he said.