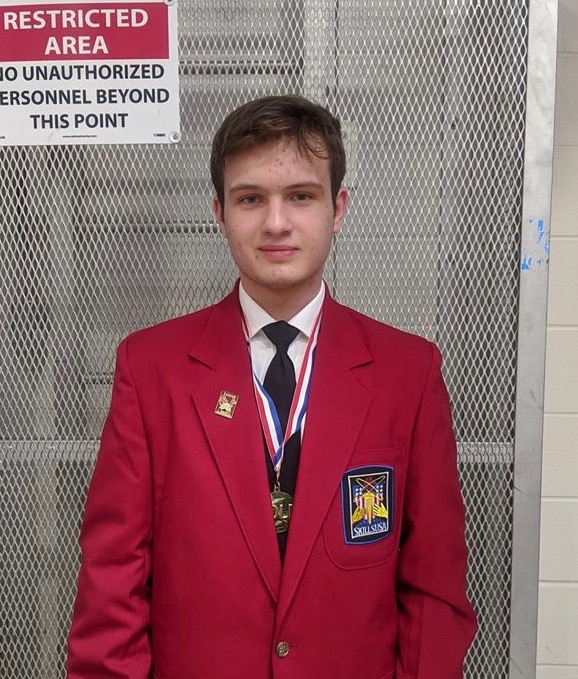 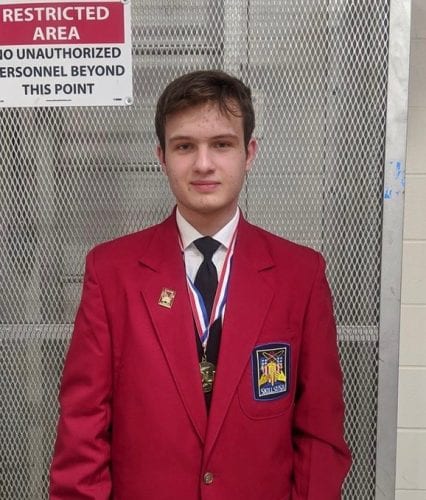 SkillsUSA president Kiril Melnikov, a senior, won gold in Automotive Refinishing this year. He is disappointed he won’t be able to go to states and show off his skills. (THE WESTFIELD NEWS SUBMITTED PHOTO)

After a stellar performance at the SkillsUSA regional competition on March 9, which netted Westfield Technical Academy 16 medals and four perfect scores, Melnikov, the WTA SkillsUSA group president, and his teammates were planning for the next phase of competition when schools were closed to flatten the curve of the coronavirus spread.

The Westfield News reached out to Melnikov, who won gold in Automotive Refinishing, for his thoughts on the school closure.
“Personally, I don’t have any ‘medical’ opinion on the whole quarantine situation. But I’m upset that all the trips and fun stuff were cancelled along with the school. There’s a senior trip, shop field trip, and we had a volleyball tournament that was completely shut down,” Melnikov said.
“By the way the SkillsUSA State Conference was cancelled. I feel very disappointed and feel like the gold medal was all for nothing. That’s because the `real’ competition is hands-on and it shows your actual trade skills. All-in-all I’m just `school sick’, “ Melnikov added.
We also asked him to reach out to a few of his classmates for their thoughts.
“I think it was smart to cancel school. It shows they’re concerned about the public health and I’m glad they are taking the necessary precautions in order to slow the spread of the coronavirus,” said Allied Health senior Savannah Shay. Shay was named Outstanding Vocational Student of the Year at WTA and was expected to be honored at a banquet with her peers statewide in April.
Other classmates expressed a range of emotions from boredom, to relief, to frustration.
“It sucks cause I’m bored and we miss out on all the senior things like prom, the senior trip and graduation. I would much rather go to school,” said James McDonald.
“Well I kind of miss my friends from school and working on cars during shop, I miss some teachers as well, but I definitely don’t miss the work. Being quarantined at home is very boring, so honestly I wish we had school,” said Sean O’Keefe.
“At least let us graduate,” Leilani Marsh said.
“It’s awesome except for the fact that I missed out on my senior trip,” said Thomas D’Allesandro.
Another senior, Alice Mosijchuk, also agreed with the decision. “ I think it’s important that it’s being done to limit the spread of the virus, but it is hard in some ways, especially for those parents who now have to watch their kids who are home or who can’t work because they have no work right now,” she said.
Deajah Barbour also agreed, but her feelings were mixed. “I think that it’s a good idea that they cancelled school, but I think that it’s terrible for those who are on co-op because they suspended co-op. Also, a lot of us seniors are going to be very very upset if our prom ends up being cancelled,” she said.
Aviation Technology senior Lidia Bazukin had a lot to say about the disruption to her studies.
“In my opinion it’s really annoying because for my shop, since we have a certain amount in of hours we need to complete with the FAA program to actually graduate out of aviation. Now that school got cancelled we’re behind and when all of the other seniors graduate on June 4 and don’t come back to school, our shop has to come back for shop because we aren’t gonna be done with the program,” Bazukin said.
“Also, our shop is set up with classroom hours and shop hours, for example we do paperwork, tests, and written projects for ‘classroom’ hours vs when we have ‘shop time’ we do things like welding, painting, or any work on the aircraft hands on. Since we’re behind we have to do online `classroom’ hours so our teacher sends us projects, essays, paperwork and reading we have to do, so it’s considered like online school. I don’t like that because I like to have a teacher explain it to me in person if I have any questions that can be answered,” Bazukin said.