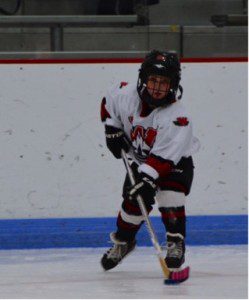 October 24th, 2015
Peewee 2
Westfield Bombers vs. Nonotuck Gold
Lossone Rink, Easthampton, Ma.
Westfield 8, Nonotuck 1
The Bombers first three games are away this season but that didn’t matter in their first contest as they came out firing on all blades. The Bombers had the better of the chances of scoring in the first period constantly keeping control of the puck in the attacking zone. At the 8:57 mark in the first period Tegan Stannard scored the first goal of the Bombers season with a howitzer from the right circle. The goal was assisted by Michael Antonellis and Tyler Barker. The first period would end with the Bombers in front 1-0.
The Bombers broke through almost immediately in the second as they out-shot Nonotuck 17-5 in the period. JJ Fox scored at the 11:15 point with Tyler Kutt assisting on a nice pass for the goal. Gage Sperlonga would then score the next two goals, both during the same shift. Brandon Powell, JJ and Noah Durfey would assist on the two goals by Gage with JJ getting his first of three assists making him a play-maker. Nonotuck would then get on the board with a centering pass from behind the net to close the scoring at 4-1 to end the second period. The young Bombers were definitely not done as Tegan scored his second of the game at 6:11 on a power play. At 4:47 in the third Ethan Clarke notched his first goal of the young season on a power play goal of his own with Tyler Kutt getting his second assist of the game with a beautiful cross-ice pass. Noah Durfey then notched his first goal of the season with 1:51 left in the third on almost the same play as Ethan’s with Brandon and JJ getting their second assists of the game. Brandon Powell extended the lead for the final goal with a wrister from the point. Gage and JJ would assist on the play.
With exceptional play by the forwards and defense working well together led by Elyse Edinger, Jakob Marcoulier, Aiden Lakin and Nick Paul they kept Nonotuck struggling in their own zone. The defense kept the Nonotuck shots to the outside keeping the rebounds on goalie Sean Rowbotham to a minimum. Sean made all but one save playing extremely gritty in front of the net. It was a very good win in the Bombers first game showing consistency in competing and execution. Westfield out-shot Nonotuck 30-9.

October 25th 2015
Peewee 2
Westfield Bombers vs. Brattleboro
Nelson Whittington Ice Arena, Brattleboro, VT.
Brattleboro 4, Westfield 1
The young Bombers headed up to Vermont for their second consecutive road game to start the season to face the Brattleboro team with their officiating crew sponsored by the Ray Charles Foundation. It was a very physical game from the face off with both teams showing excellent 2 way hockey, fore-checking, back-checking and body contact driving the opponent off the puck. Brattleboro would open the scoring early in the first at 10:12 on a rebound after an initial fine save by Westfield’s goalie Sean Rowbotham. Soon after @ 9:42 still in the first Westfield’s Gage Sperlonga scored his third goal of the season with a top shelf shot from a sharp shooter’s angle that Brattleboro’s goalie had no play on it. Brattleboro closed the scoring at the 2:32 mark left in the first on a breakaway giving Brattleboro a 2-1 lead to end the first.
Midway through the second period is where the game got away with both teams still playing physical but the calls were not in Westfield’s favor. Eventually, frustration set in and with a 5-3 advantage Brattleboro scored two goals in one minute at the end of the second period making it 4-1 Brattleboro.
The third period showed both teams just trying to control the puck with 2 shots on goal for Westfield and 1 by Brattleboro. Brattleboro out-shot Westfield by a 14-11 margin.

Brattleboro 10, Westfield Jr. Bombers 3
Sunday October 25, 2015 at Amelia Park Ice Arena Westfield, MA
Division: Squirt B
The Bombers played their first home game of the season against Brattleboro on Sunday at Amelia Park. Though the results were not what the team hoped for they played hard and fought all game. Sawyer King playing his first game in goal for the Bombers was outstanding, making 20 saves in the loss. Brattleboro raced out to a five goal lead before Brannon Miele scored the Bombers first goal of the game from an assist by Joey Roselli. In the mid second period Rick Moritko scored his first goal of the season to cut the Brattleboro lead to three goals. Brattleboro went on to score the next five goals before Brannon Miele added his second goal of the game, assisted by Rick Moritko. A great job to the entire team for never quitting and battling to the end. 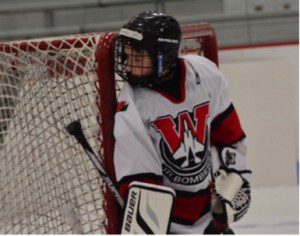 October 24, 2015
Smead Arena 9:20am
Squirt 3 Black
Westfield Jr. Bombers 4, Ludlow 1
The Westfield Squirt 3 Black squad opened their 2015-16 campaign with a 4-1 win over Ludlow. Westfield carried the play over the first two periods and raced out to a three-goal lead. Goals by Mike Miller, Mason Garrity and Jacob Hanselman certainly put the Ludlow skaters back on their heels. However, Ludlow came out skating in the third period with over a dozen shots on Westfield goaltender Evan Mastroianni. Mastroianni made some brilliant saves, including stifling three straight breakaways before one shot got by him late in the third. With time running out, Garrity’s second goal of the game clinched the victory. A great start for Westfield Squirt 3 Black and next up is a match-up with Amherst on Saturday.

October 24, 2015
Amelia Park 7:00 am
Mite 1
Ludlow Red, 19, Westfield Jr. Bombers 3
The Mite 1 Westfield Jr. Bombers started out the game with strong defense and held off the Ludlow Red team but Ludlow took the win. Jake Basler, Isaac Durfrey, Andrew Galczynski and Joseph Jubb all played well defensively. Nicholas LaComb, Jacob Mallard, Parker Stockseth, Gavin Trzepacz and Charlie Wilson all played well offensively but Liam Dolan had one goal and Sean McMahon had a hat trick. Cody Bard was in the goal and had 69 shots on the net with 50 saves.

October 25, 2015
At Amherst
Mite 3 Black
Westfield Jr. Bombers vs. Amherst
With a stout effort in goal by Daniel Methe, the Mite 3 Black Jr. Bombers had their first game of the season against Amherst Sunday at the Mullins Center. Scoring for the Bombers was lead by Treygan Lemanski with 4 goals & 1 Assist. Connor Laiho also netted 2 goals with an assist by Carsen Michelucci. Excellent defensive play from Alex Saalfrank, Matty Bussell and Josh Cormier-Healy kept the Jr. bombers in it until the end. – Courtesy of Westfield Youth Hockey