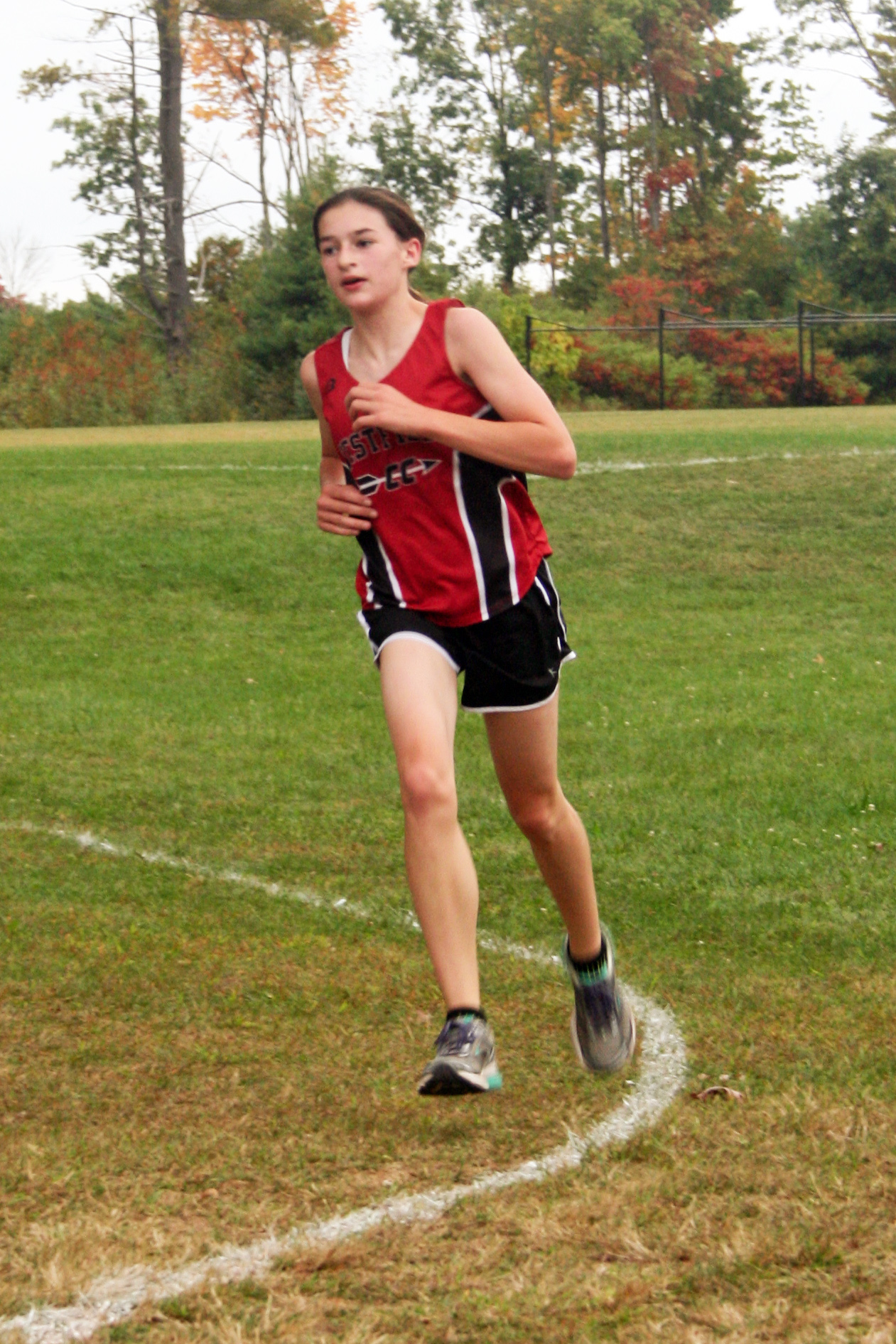 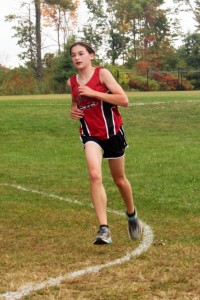 LADY BOMBERS LEAP AHEAD: Hampshire’s Taylor Blow won the girls’ portion of the race in 18:51.08.
Northampton won the team completion with a 55, followed by Hampshire (60), Amherst (105), Holyoke Catholic (157), and Westfield (200).
Sophia Gronbeck (27th, 20:39.33), Mia McDonald (35th, 21:12.83), and Madison Eline (50th, 21:46.79) managed to crack the top 50 for the Bombers.
It was the best finish ever at a conference championship for Westfield. The previous best for the Bombers came in 2009, when they placed eighth.
“While only one of the girls managed to turn in a season best or personal best time, I’m convinced they are all at the peak of their conditioning,” Westfield coach Mike Rowbotham said. “Many recently PR’d on a flatter course, and despite knowing Stanley Park so well, it’s a very different experience running in this meet.”
Rowbotham said the main difference in races is that during a regular season dual meet, his runners can easily spot their teammates whereas in a championship race, 10 girls running in field of more than 200 makes things much tougher.
“It’s really hard to work with your teammates to execute your race strategy and really run your best race.
Girls’ and boys’ cross country teams will return to Stanley Park Sat., Nov. 14 for the Western Massachusetts Championships, beginning at 1 p.m.

BOYS’ SOCCER
STATE VOCATIONAL SEMIFINALS
Westfield Technical Academy 1, Blue Hills 0
Sergiy Kabysh scored off a pass from Dominic Rosario to send Westfield Tech to the state vocational finals.
Tigers’ goalie Anatoliy Suprunchuk delivered a tremendous effort in goal, pitching a shutout.
“(Our) guys were very excited tonight and played really hard,” Westfield Tech coach Kyle Dulude said. “We definitely felt confident and in control and the guys played with confidence.”
The Tigers will now host the Upper Cape Cod RVT Rams (Bourne) Monday in the Massachusetts Vocational Athletic Directors Association Boys’ State Soccer Tournament championship at Bullens Field at 6 p.m.
“Our seniors who have now played in this tournament the last three years are prepared for this type of environment and are giving it their best shot.”

Bombers wrap sensational regular season
Westfield 3, East Longmeadow 1
Sam Winiarski, Andrew Burrage, and Igor Belykopytov scored one goal apiece to lead Westfield in its final game of the regular season Saturday.
The Bombers wrap up the regular season with a 12-3-3 record, their finest in nearly a decade.
“Now we will just wait and see where we’re seated,” Westfield coach Andrew Joseph said.
Tournament seeds will be announced Monday.