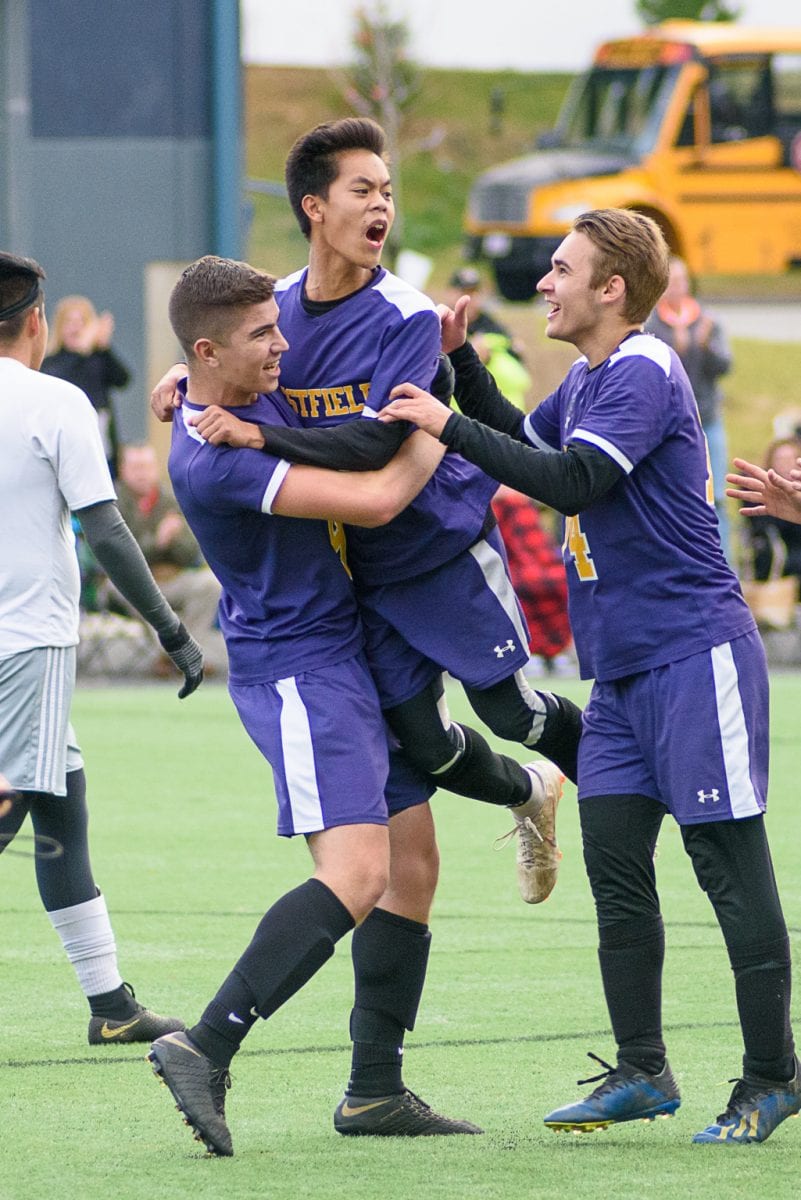 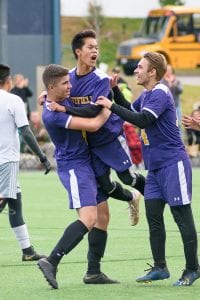 WESTFIELD – At times, this season, the Westfield Technical Academy High School boys soccer team has looked scary good. The Massachusetts Vocational Athletic Directors Association tournament was no exception.
Westfield Tech’s Brad Marion took a high bouncing ball on a long pass from Dan Kontsimal, outpacing a wall of defenders to nail a breakaway game-winner 1:45 into overtime to lead the Tigers past the Franklin County Tech Eagles 2-1 in the MVADA boys soccer championship at Roots Field.
It was Westfield Tech’s first MVADA boys soccer title since 2015, and third in six years. The Tigers (19-1) won their first championship in 2013. They were runners-up in 2012, 2014, and 2016-17.
“Even though we have been there for the last seven years, you can’t take these things for granted,” Westfield Tech coach Kyle Dulude said. “All of a sudden you can see yourself never in that position again.”
Thankfully, Marion found himself in the right position.
“It was just an amazing feeling,” Marion said. “It just brings tears to my eyes. There was a lot of pressure not to fail.”
The ball failed to find the back of the net a number of times through the first 90-plus minutes with several attempts coming up just short.
About 10 minutes in, Darryl Reopel delivered a solid pass to Adam Strycharz that Strycharz shot through a small crack in the defense from about 18 yards out. Franklin Tech goalie Grayson Funk made the save.
Ruvim Vdovichenko had a nice strike nearly 10 minutes later only to have the ball plucked out of the air by Funk.
A short time later, Funk stopped another nice effort from Westfield Tech. Strycharz swung a cross pass over to Marion, who made a quick turnaround shot in the box. The save was made.
Early in the second half, Vdovichenko drilled a low liner but that too was swallowed up.
Franklin Tech played on its heels for most of the first half and into the second half, but the Eagles soared into the lead when Jovanni Ruggiano buried a rebound.
Marion responded with what looked like the equalizer on a highly questionable offsides call. Westfield Tech did not let that get them down.
Reopel scored on a penalty kick to tie the game 1-all.
Westfield Tech received a scare in the opening seconds of the overtime period when a sharply hit Franklin Tech ball from just inside the midfield line struck the crossbar and went harmlessly over the net.
The stage was set for Marion’s heroics.
“I almost stumped it,” Kontsimal said of his game-winning pass. “Literally as the ball came out of the air, I knew in that moment the ball passed goal. Look what happened – we won states!”
It was Westfield Tech’s third victory in three days, having entered Wednesday’s contest with a regular season win over McCann Tech (Tuesday) and MVADA semifinal win on penalty kicks over Lynn Tech (Monday).
“Obviously the last couple of days, three games back-to-back, we kept disciplined and worked hard,” Tigers goalie Dave Antonovischi said. “I feel like we can go all the way.”
Westfield Tech learned late Wednesday that it had earned the number two seed in the upcoming West Division 4 boys soccer tournament. It is their highest ranking in school history.
Official tournament game details were not available as of press time.
“I told someone week one that if we do it, we’re going to be doing it with a little bit of help from someone up above,” coach Dulude said, referring to Westfield school committee member Kevin Sullivan, whose influence on local sports ran deep. “(Kevin) was the guy that I know could oversee this program and help us from up above.”
Local teams honored Sullivan in various ways after his sudden passing this fall. The Westfield Tech boys soccer team had his initials, “K.S.”, embroidered on their jerseys this season.
“In that (semifinal) game, we had 22 penalty kicks,” Dulude said. “I know there was a lot of praying. I would lie if I’d say I wasn’t talking to Kevin up there, asking him for something to help us out down here.
“Kevin Sullivan was a big supporter of our program,” the head coach explained. “He would be the first one to probably text me right now and tell me to congratulate all the guys. I think special seasons like this, there are underlying things, there are other hidden things, there are things people don’t know about. Our team – we clung on to anything we could find to motivate us. That wasn’t anything hard to cling on to. He was a great individual. … I guarantee that those initials on our uniforms helped us in this state vocational tournament get to where we are.” 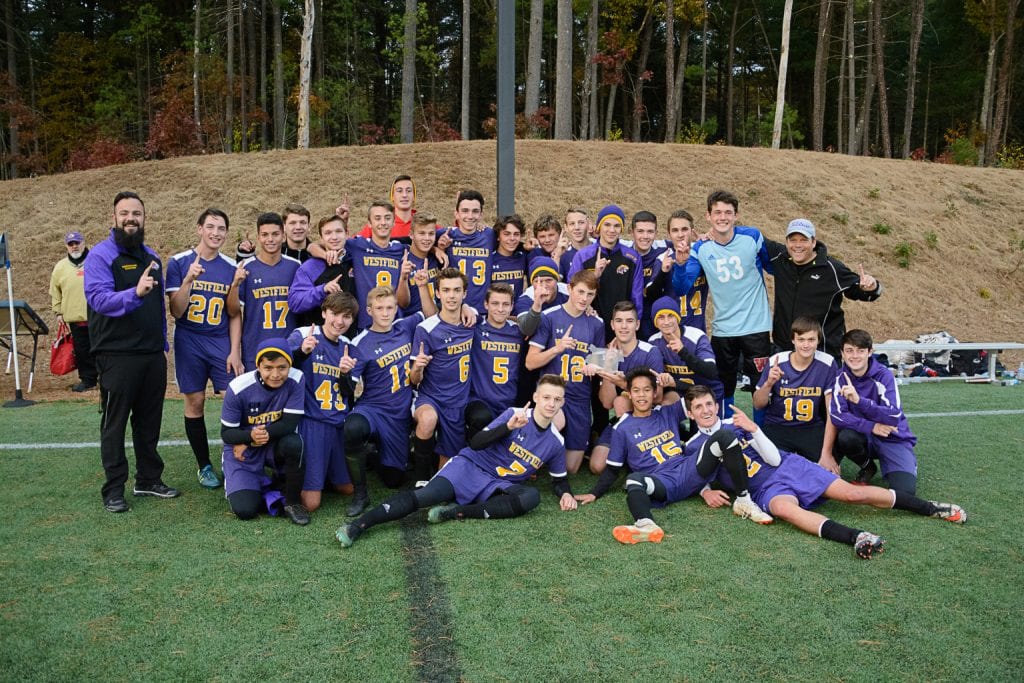