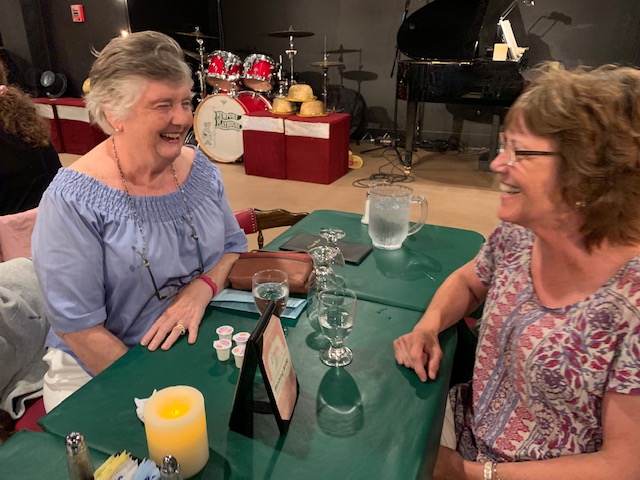 WESTFIELD-Linda Powers and Janice Rakouskas have been friends since their first job as service order clerks for the New England Telephone Co. in Springfield in 1968, and while their schedules can still be hectic at times, they reserve at least one day each year for a “fun getaway.”

That getaway this summer for Powers and Rakouskas was a Whip City Travelers trip to the Newport Playhouse & Cabaret Restaurant in Newport, R.I. on July 1 – along with close to 50 other area residents who boarded a King Ward Coach Lines bus at 8:30 a.m. from a parking lot on Casimir Street. Powers also serves as president of Whip City Travelers. 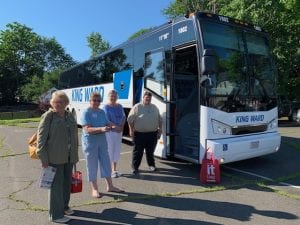 Powers, of Westfield, and Rakouskas of Indian Orchard, especially enjoyed the special connection they had with the title of the play, “Always A Bridesmaid,” which was a featured attraction of the trip that also included an extensive luncheon buffet featuring lobster, mussels in wine, clam chowder and Creole shrimp and rice. Following the hour-long performance, an energetic cabaret show closed out the afternoon in Newport. 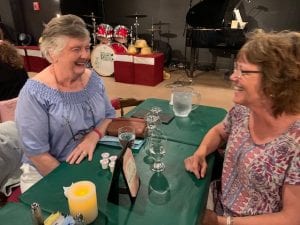 Both women had served as bridesmaids for each other and loved reminiscing of those special days that are forever etched in their memories.

Powers noted she has been a bridesmaid for girlfriends three times, and Rakouskas said she has served as a bridesmaid eight times. While they expected the play to feature younger characters as bridesmaids, the play’s message of being there for each other hit home.

“I enjoyed the play because each character was so different yet they complemented each other,” said Rakouskas. “You could sense the endearing friendships they all shared.”

“I enjoyed the show with its silliness from beginning to end,” said Powers.

Both women agreed that the cabaret featuring the waiters and hosts from the playhouse did an “outstanding” job through the whirlwind skits, songs and dance routines. 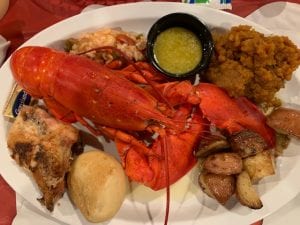 When it was time to leave the playhouse, all of the actors were lined up by the door and extended a thank you for visiting. Jonathan Perry, who serves as president of the Newport Playhouse & Cabaret Restaurant, also shook hands with patrons and posed for a group shot outside the playhouse. Motorcoach operator Tom Houle, who has worked for King Ward since 1997, effortlessly returned everyone back to Casimir Street at exactly 7:30 p.m.

The Newport trip is among many offered throughout the year for persons in the Greater Westfield area. Trip participants do not have to be seniors or live in Westfield.

For Powers and Rakouskas, trips like Newport are an ideal way to spend “girlfriend time” together.

“I enjoy the trips that are one day so you do not have to pack anything,” said Rakouskas, adding, “the trips are reasonably priced and it is enjoyable to sit back, relax and catch up with Linda.” 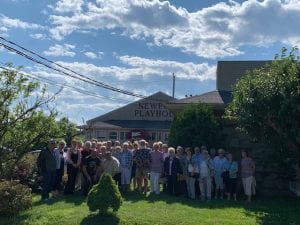 Dolores Reilly, of Southwick, was also among the attendees spending time with a girlfriend and  “loved every minute” of the daylong trip.

“The meal was very good, the play featured believable characters, and the one-liners and songs from the cabaret entertainers made the trip a day to remember,” said Reilly.

Once back on the bus, everyone was comparing notes about the day’s highlights. Donna Schaefer of Westfield had traveled with her friend Barbara Coleman, also of Westfield, and both women said they enjoy traveling together through the Whip City Travelers.

“It was my idea to take this trip,” said Schaefer, noting she has served as a bridesmaid for five girlfriends over the years. “I loved the play and the characters.”

“I enjoyed the play but I liked the cabaret better,” said Coleman, adding her favorite performance was Perry on guitar performing one of his original songs, as well as a classic by Johnny Cash, and then shared the spotlight with Audrey Robinson singing the hit song “Shallow” from “A Star is Born.”

“The play was entertaining,” said Ekmalian, noting she too had been a bridesmaid once. “I also enjoyed the cabaret with its one-liners and especially the songs sung by Jonathan Perry.”

As Perry said adieu to the travelers settled into their seats, group leader Jeanette Fletcher assured him the Whip City Travelers “will be back again.”

Since 2002, the Whip City Travelers has been offering daily and overnight trips, as well as excursions to area casinos, and welcomes new ideas from area residents.

The trips offered through the Whip City Travelers are an “affordable way” to travel to new destinations in a relaxed, comfortable, and supportive environment, according to Westfield Council on Aging Executive Director Tina Gorman.

“The logistics are age-friendly and tailored to both the novice as well as the experienced traveler,” said Gorman.

Gorman noted that many older adults are hesitant to venture to new places on their own.

“Older adults may shy away from traveling to an urban area with busy streets and limited parking,” said Gorman, adding, “or they may have difficulty navigating unfamiliar roads and highways.”

Gorman said that some seniors have given up driving altogether, making travel “extremely challenging.”

“Whip City Travelers trips are varied and numerous,” said Gorman. “In addition, traveling with a group is a wonderful way to meet new people and make new friends.”

For persons interested in upcoming trips, here’s a sampling of what is being offered in the coming months:

“Our monthly casino trips are very popular,” said Barbara Sokolwski, who also serves as treasurer of the group. “Our goal is trying to add new trips but we have to be careful since some participants may have walking issues.”

Sokolwski added that she too enjoys going on several Whip City Travelers trips throughout the year.

“I like going on the trips because everyone is a lot of fun,” said Sokolwski.

Gorman noted that while the Whip City Travelers is housed at the Westfield Senior Center, the group is a separate entity from the Council on Aging with its own board of directors, budget, and bank accounts. Also, the group’s board sets its own policies and plans its own trips.

“As a service to those who enjoy the low-cost trips, notifications are posted in the Council on Aging’s monthly Voice of Experience newsletter,” said Gorman, adding, “however, the group is not under the umbrella of the Council on Aging and Westfield Senior Center programming is not scheduled around trips.”

For more information on trips, visit the Whip City Travelers office on Mondays, Wednesdays or Fridays from 9 a.m. to noon at the Westfield Senior Center or call (413) 562-6435.