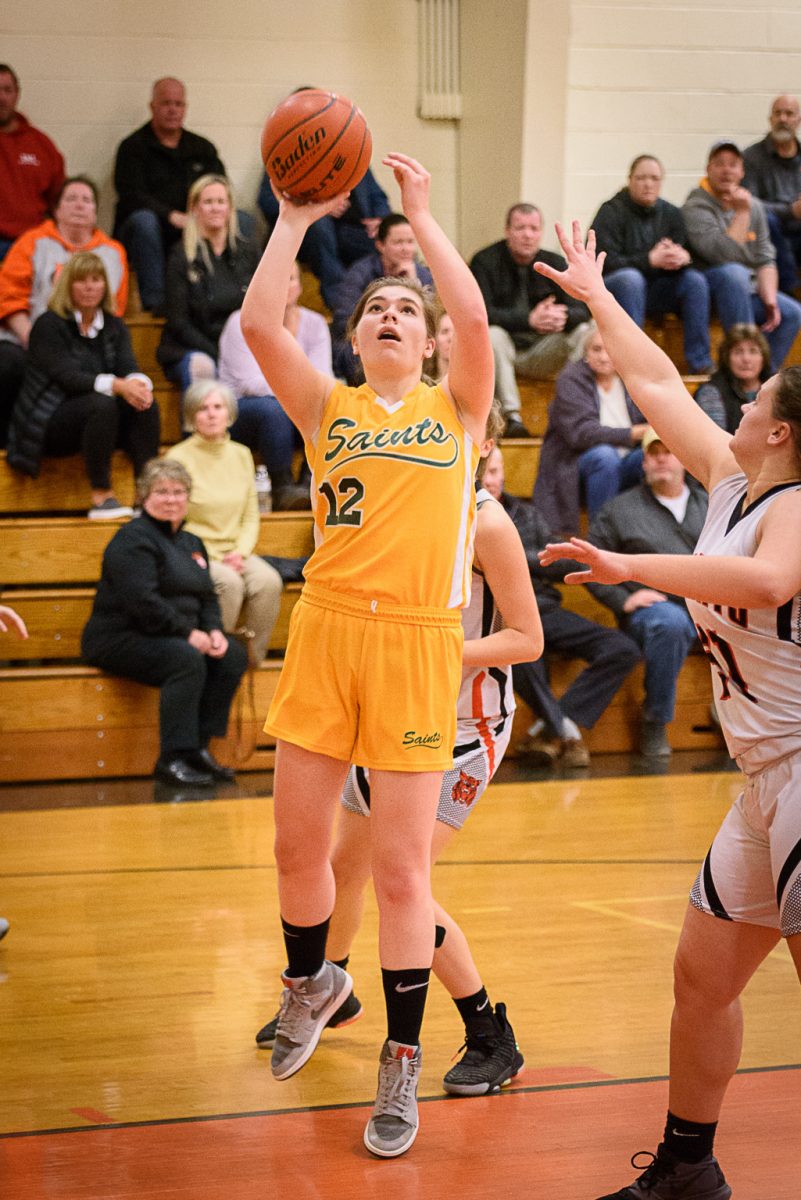 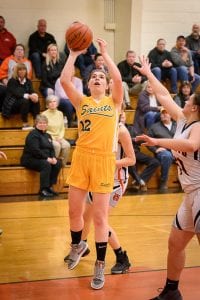 Anna Kosinski (12) puts one up inside the paint for St. Mary’s during a first round tournament matchup at Lee on Monday night. (MARC ST.ONGE / THE WESTFIELD NEWS)

LEE – The St. Mary’s High School girls basketball team hit a road block on their playoff journey.
No. 4 Lee opened the 2019-20 West Division 4 tournament with a 13-0 run and stormed past 13th seeded St. Mary’s 60-12 in a first round contest Monday night.
Three different Lee players hit 3-pointers in the second quarter to take a commanding 36-5 lead into the half, including sophomore forward Emma Puleri, who finished with a game-high 16 points.
Lee’s suffocating defensive style – the Wildcats (12-9) used a press, effectively trapping St. Mary’s (11-8) in their backcourt and near the sideline – wreaked havoc with the Saints.
The lone made basket for St. Mary’s in the first quarter came with 1:40 remaining when freshman Amelia Willenburg drained a 3-point corner bucket. Senior Anna Kosinski used the backboard to rattle in a two-pointer in the opening minute of the second quarter for St. Mary’s. It was the Saints’ only points of the period.
Lee closed out the first half on a 19-0 run.
“They drove and re-drove,” St. Mary’s girls basketball head coach Rodney Rodriguez said of the opposition’s willingness to dribble into the lane. The Saints were without two of their main interior defenders due to an injury and a personal decision.
Still, even down by double digits, St. Mary’s displayed true sportsmanship by evenly distributing the ball among their players and even helping up a fallen Lee player despite giving up an easy two.
“That’s Caitie Seklecki,” coach Rodriguez said of his freshman player. “She will knock you down, but pick you up.”
St. Mary’s came out strong in the third quarter, limiting Lee to just two points in nearly four minutes of action. The Saints defense allowed just one field goal over the first four minutes, 52 seconds of the period.
During that time frame Kosinski made a strong post move for two points, and wrestled the ball away from a Lee player before ever being whistled for a tie-up. The Saints followed up with an alley-oop as Willenborg caught a pass mid-air from eighth grader Emma Goodreau and laid the ball in.
St. Mary’s closed out the third quarter with a 3-pointer from Goodreau.
Lee reeled off a 15-0 run in the fourth quarter to end it.
“We’ve been to the first round now for two straight years,” coach Rodriguez said. “We’re only going to get better mentally.”