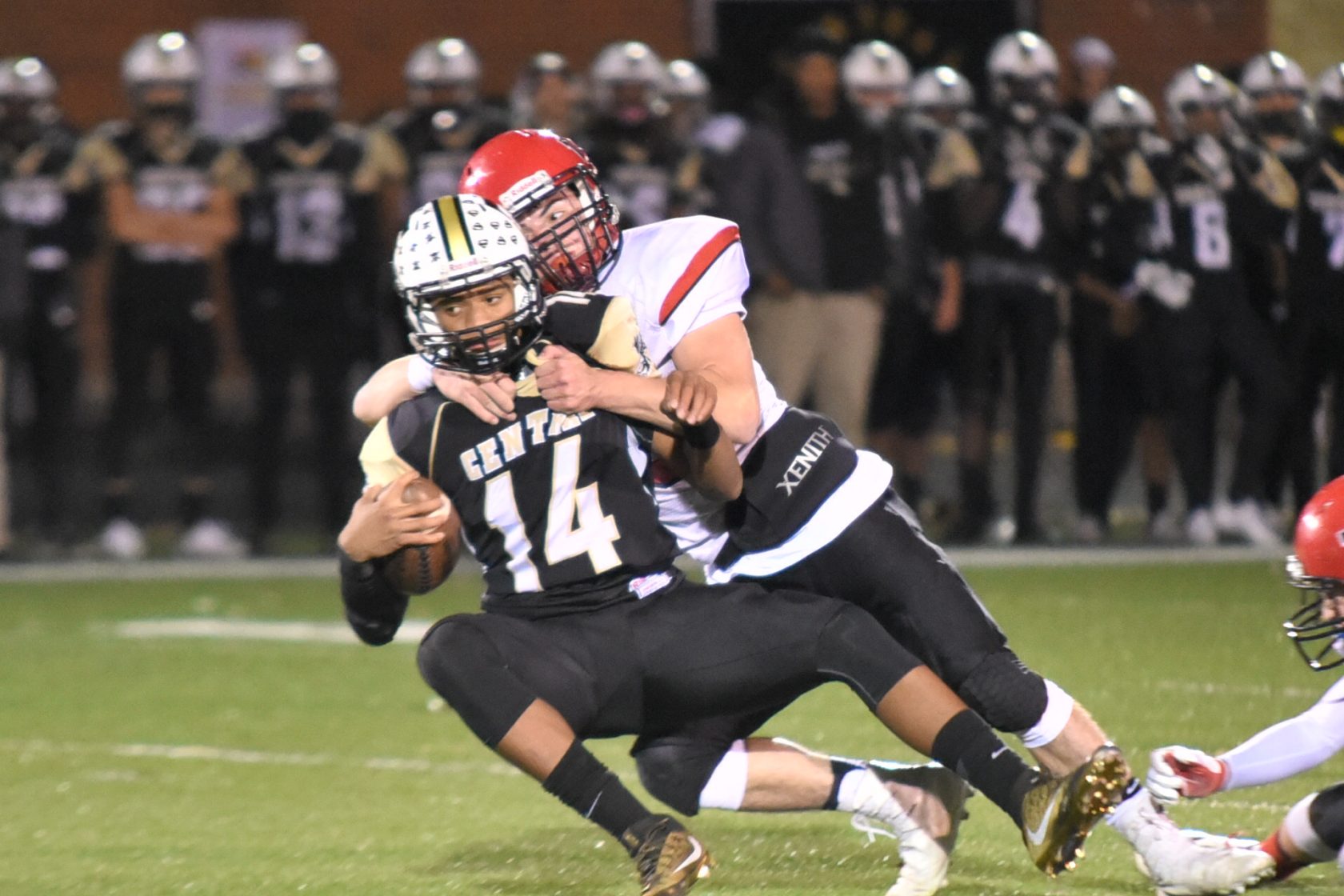 WESTIFELD – The odds of lightning striking the same spot twice are, as we all know, remote.
The chances of it happening three times is, if not improbable, astronomical, but don’t tell the Westfield High School football team that.
Two years ago, the Westfield High School football team stunned Central twice, defeating the Golden Eagles for the first time in what seemed like decades. The Bombers took down their nemesis in a late season shocker, 26-25, before knocking them off again in the Division 2 West Semifinal en route to a West Championship title.
The two teams have been on a collision course again this season since Week 1. A highly-anticipated Westfield-Central rematch is set for Friday night at Berte Field in Springfield at 5 p.m.
“The last seven to eight years, it has been one of the games you can circle on the calendar,” Westfield football head coach Rob Parent said. “With the advent of … summer camps, there are friendships with a lot of the guys and the coaching staffs. There’s a mutual respect between both programs, but when we kick off that kind of goes out the window.” 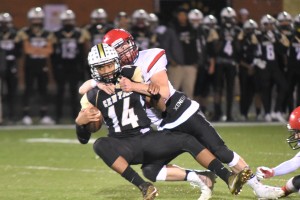 Westfield stopped Central senior quarterback Eriziah Walker (14) on this play, and held the Golden Eagles from taking flight in the final seconds of the Bombers’ thrilling sectional semifinal victory at Berte Field in Springfield in 2016. The two teams meet in a highly-anticipated rematch Friday night in Springfield. (Photo by Marc St. Onge)

This season, Westfield (5-0) has been led by lightning-quick, strong-armed senior quarterback Mike Nihill; electric running back Dakotah Moynihan, and some explosive pass catchers like Baley Collier, who also can take it to the house every time he touches the ball on special teams.
“We’re not a one-trick pony,” coach Parent said. “With Mike Nihill and center Johan Schieppe getting the ball to our team on the right plays with the right matchup, it has allowed some other guys to get involved.”
Moynihan, Nihill, and Adam Boggs have already combined for some 1,400 yards rushing through five games. Collier, Christian Nalepinski, C.J. Skribiski, and tight end Mason Collingwood.
“It’s a nice grouping,” Parent said. “It makes (us) hard to defend.”
Their opponents would likely agree.
Westfield has run roughshod on the competition this season. The Bombers opened the season with a 39-0 shutout of Ludlow, and followed that up with an incredible comeback against Leominster on the road.
Since that thriller, Westfield has blown out Commerce 59-6, Agawam 48-14, and Chicopee Comp 41-15. During that stretch, the Bombers outscored their opponents by a combined 121-35. Throw in the Week 1 blowout and Westfield has destroyed Western Mass., 160-35.
While the offensive numbers may blow some people’s minds, Central may not be so easily impressed.
Central (4-1) has reeled off four straight victories, downing St. John’s-Shrewsbury 61-34, West Springfield 55-0, Chicopee Comp 67-7, and Holyoke 55-0.
“Looking at this personnel this might be the best grouping Central has ever put them on the field,” coach Parent said. “The talent is unbelievable. This arguably might be the best team they have ever assembled.”
Parent said Central has taken the reigns from teams such as Cathedral and Longmeadow as the region’s best.
“They go two-deep on both sides of the ball; they’re dynamic on all phases of the game,” he said. “It’s a testament to how the kids are committed to the program and the coaches … and vice-versa.”
Parent said Central is one of the few teams he has seen that is entirely made up of one-way players. Their players typically play one position on offense or defense – not both – for the entire game.
That keeps all their guys fresh nearly at all times.
“Half the time they’re about to run another play and the chains aren’t even lined up yet,” Parent said.