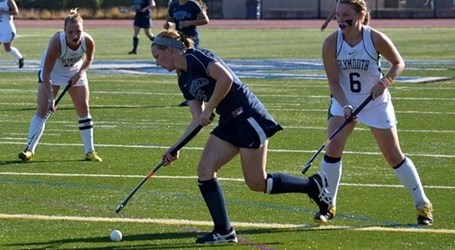 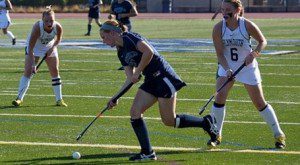 SPRINGFIELD – Junior forward Holly Brouillette scored a pair of goals for the Owls, but Westfield State fell short against Western New England by a 4-3 score at Golden Bear Stadium on Wednesday afternoon.
Western New England sophomore Allison Jackson led the Golden Bears with her first two goals of the season. Jackson’s first goal came from an assist from Katherine Ferrari who drove down the middle and dished it ten yards to Jackson. Her second goal came from a penalty corner pass from Lana Felice with just under 10 minutes left in the game to stake the Bears to a 4-2 lead.
Westfield did its best to rally late, with Jennelle Juskiewicz answering Jackson’s tally with a goal of her own just 30 seconds later to cut the Bears’ lead to 4-3 with 8:55 left in regulation.
Westfield State had a chance to tie late in the game but had a goal waved off due to an Owl foul. The Golden Bears’ Sabrina Lyesiuk stopped a possible Owl goal by preventing the drive with a steal with ten seconds left in the game.
Goalkeeper Grace Trupe had three saves for Western New England earning the win. Westfield’s Megan Fountaine took her first loss of the season giving making five saves in the loss.
Western New England University will face Clark University on Sep. 12 at 1:00PM at Golden Bear Stadium for their second game of a three game home stand. Westfield State will travel to Framingham State on Saturday for the Owls first Little East Conference matchup of the year.