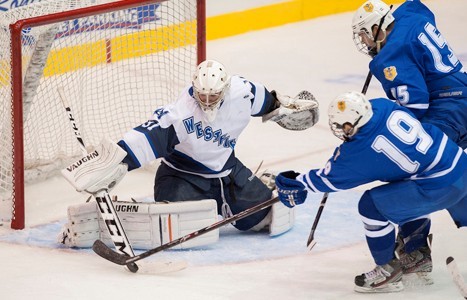 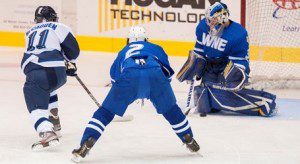 P.J. McCadden slips the puck underneath the goalie pads to give Westfield a 1-0 lead. (Photo by David Fried)

SPRINGFIELD – Junior forward Matt Dore (Shelburne, Mass.) scored two goals to pace the Western New England University ice hockey team to a 4-2 victory over Westfield State University in the Sixth Annual Falcon Cup Friday at the MassMutual Center.
It was the season opener for the Western Mass. rivals and Western New England’s first Falcon Cup victory in six tries.
Leading 2-1 after two periods, Dore clinched the coveted Falcon Cup with late third-period goals. He gave the Golden Bears a 3-1 lead with 3:32 remaining when he gathered in a rebound of a missed shot by Brian Post and calmly deposited the puck in the back of the net from the point.
Dore then scored an empty net power play goal with 1:13 remaining. 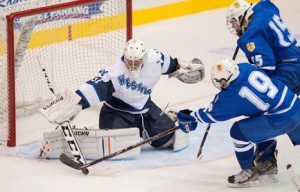