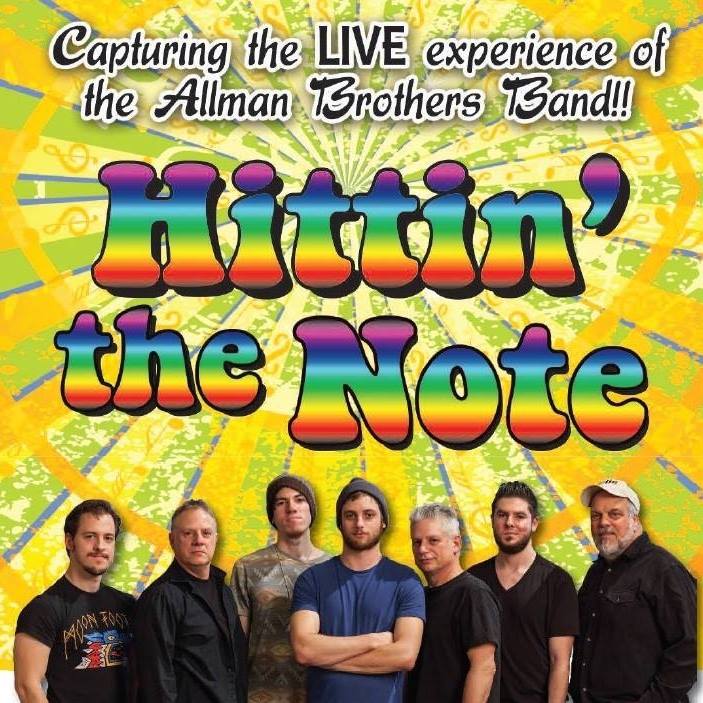 WESTFIELD – The Westfield on Weekends MusicFest concert series is ending Thursday with Hittin’ the Note, an Allman Brothers tribute band.

The final concert begins with opener Andy Hasaband at 6:30 p.m. followed by Hittin’ the Note at 7 p.m.

Hittin’ the Note is well-known for their “on the money” renditions of Southern Rock, as performed by the Allman Brothers Band.  Formed by drummer/vocalist Jeff Turcotte, the band seeks to capture the experience of what it was like to attend a concert by the group during their heyday. Named after the twelfth and final album by the legendary group, they have appeared at numerous area venues, including the Wherehouse in Holyoke.

Band members span generations. They include Turcotte’s son Joel (Drums/Percussion); Bob Toriani (Keyboards/Vocals); Tom Doherty (Guitar/Vocals); Dan Girouard (Guitar); Zach Longhi (Bass); and John Makowski (Lead Vocals/Harp). The band was supposed to open MusicFest this year, but the June concert was rained out and instead, they are wrapping up a summer of music downtown.

The free outdoor concert is on Park Square Green, rain or shine.

Vendors will offer a variety of refreshments, including grilled specialties from North Elm Butcher Block and sweet treats from Moolicious Ice Cream. The Tavern will serve beer and other adult beverages on the Green.

Once MusicFest is over, the WOW board will turn toward its next big event, PumpkinFest, on Oct. 19. The third annual event includes free pumpkins for children to carve and decorate, family activities such as the Scarecrow Trail, live performances, the Westfield Gas & Electric’s Big Rigs and vendors. New this year are Trunk or Treat Boulevard and the Harvest Marketplace where crafts and artwork will be for sale.