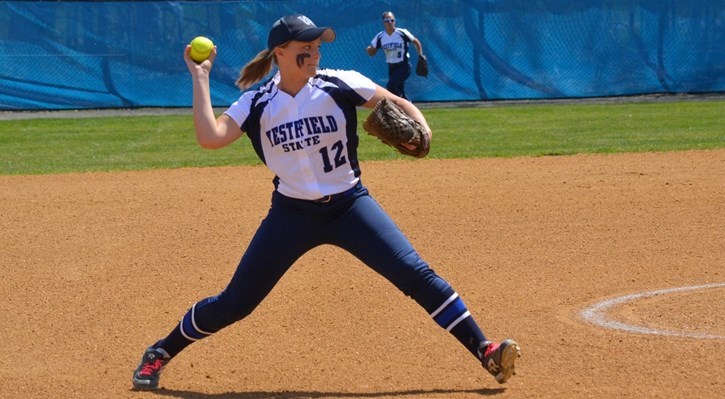 WORCESTER – Junior Lindsay Gurska (Revere, MA) batted 2-for-3 with two RBI and two runs scored in a 5-3 win and senior Clare Doolin (Newton, MA) spun a two-hitter with 10 strikeouts in a 9-0 (5 inn.) complete-game victory as the WPI softball team closed out its non-conference slate with a sweep of Westfield State Wednesday at Rooftop Field.
With the win, the Engineers are now 29-5 heading into the final weekend of NEWMAC regular season action while the Owls dip to 11-20 on the year.
The first game saw Westfield State take the early lead with two outs in the first behind an RBI single to left by sophomore Maddy Atkocaitis (Westfield, MA); however, Gurska drove a 2-run single to right to give the Engineers the advantage in the bottom of the inning. Gurska came home two batters later thanks to an RBI double by classmate junior Kristin Gallagher (Coventry, RI) for the 3-1 lead.
The Owls made it a one-run game with a sacrifice fly by freshman Caitlin Hughes (Hanson, MA) in the fourth and tied it in the fifth on an RBI hit up the middle by junior Julia Sullivan (West Barnstable, MA). 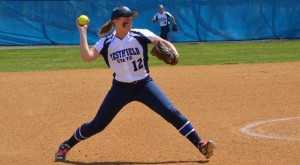 WPI loaded the bases with three consecutive singles to open the fifth. Freshman Caraline Wood (Averill Park, NY) connected on a fielder’s choice and sophomore Nina Murphy-Cook (Roseville, CA) scored what proved to be the game-winning run thanks to a miscue at the dish. After a double play, freshman Renee LeClaire (Merrimack, NH) singled in the final run with a knock to short.
After Westfield State tied it up in the fifth, sophomore Kelsey Saucier (Worcester, MA) came in and retired the last seven batters, including four via strikeout, for the Engineers. Junior Caroline Medino (Pompton Lakes, NJ) struck out a pair in the first 4 2/3. Sullivan, meanwhile, fanned three in the complete-game effort for the Owls.
Murphy-Cook batted 3-for-4 with a stolen base and a pair of runs scored as Gallagher went 2-for-3 with a double and an RBI. Sophomore Ama Biney (Worcester, MA) added a stolen base while Wood was credited with a sacrifice bunt.
Atkocaitis was a perfect 2-for-2 with a walk and an RBI for Westfield State. Junior Elizabeth Kelly (Quincy, MA) laid down a sacrifice bunt and Hughes lifted a sacrifice fly.
The Engineers scored at least two runs in each inning of the nightcap. Wood used a sacrifice fly to get WPI on the board. She was followed by Gallagher who sent a run-producing single through the right side in the first. The second inning saw Biney drill a 2-RBI double to left center. Junior Hope Shevchuk (Burlington, CT) singled in a run after sophomore RiAnna May (Westminster, CO) chased Wood home with an RBI ground out in the third. Gurska and Wood used back-to-back RBI doubles to make it an 8-0 ballgame. Wood represented an insurance run as she scored on a dropped fly ball put into play by sophomore Julia Veitch (Carlisle, MA).
Murphy-Cook (2-for-2, walk, two stolen bases, two runs), Gurska (2-for-3, two doubles, RBI, two runs) and Wood (2-for-2, two RBI, 2 runs, sac fly) each logged a pair of hits as Biney added a double and two RBI. Veitch also stole a base for the Engineers. Doolin improved to 12-1 on the season.
Freshman Bri Tortora (Worcester, MA) and junior Erika Gouin (Hampden, MA) accounted for each of Westfield State’s hits. Sophomore Michaela LeBlanc (Marblehead, MA) pitched the first three and freshman Saxon Bresnahan (Quincy, MA) was called upon to toss the fourth.
The Engineers head to MIT for a critical NEWMAC matchup Friday. First pitch is scheduled for 3:30pm. The team returns to Rooftop Field for Senior Day on Saturday versus Babson at noon. The Owls host Fitchburg State Saturday in a noon MASCAC twinbill. – Story courtesy WPI sports info