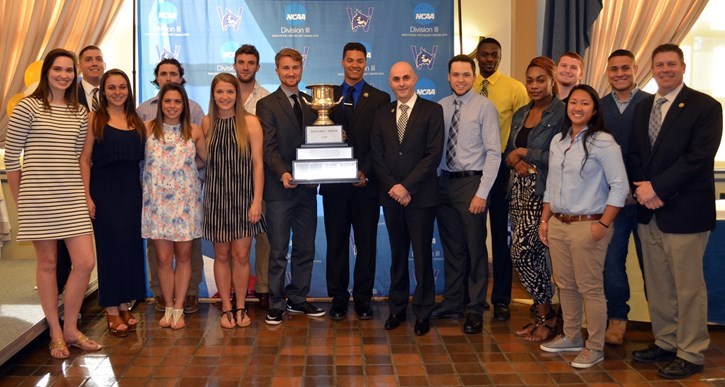 WESTFIELD – For the second straight year, Westfield State University has been crowned as the recipient of the Howard C. Smith Cup, signifying the best overall athletics program in the Massachusetts State Collegiate Athletic Conference.
The cup was formally presented at the Owls’ Student-Athlete Advisory Committee Awards banquet in Scanlon Hall on Monday night. 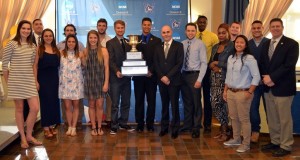 The Smith Cup is awarded annually to the member institution which compiles the most points based on the placement of each of its programs competing in the 15 league championship sports.
Westfield State closed out the year with 119 points (74.38 percent) out of 160 possible points. The Owls finished first in women’s basketball, women’s cross country, men’s and women’s outdoor track and field, men’s indoor track and field, men’s soccer, and women’s lacrosse.
Westfield State had two teams advance to NCAA tournament competition, in women’s basketball and women’s soccer, and had individual qualifiers in cross country and track and field.
“The Smith Cup is important to us in the Westfield State athletics department, and across the MASCAC as well,” said Richard Lenfest, the Owls Director of Athletics. “A rising tide lifts all ships; It shows the overall strength of our athletic program, and the effort, consistency, and success of our student-athletes and coaches across the board.”
The Owls retained the cup after winning in 2015 as well. Westfield has now won six of the last 11 cups, and 12 in the 44-year history of the award.
The Smith Cup is named in honor of former Massachusetts State College Trustee Howard C. Smith, who in 1970, urged the athletic directors of the eight State institutions to hold a series of meetings to discuss the possibility of forming an intercollegiate conference. In June of 1971, Smith’s dream became a reality as an affirmative agreement was reached and the MASCAC was created. – Courtesy of Westfield State Sports