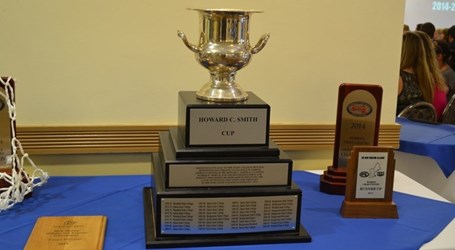 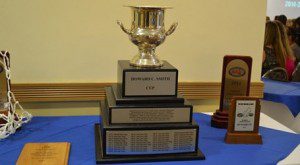 WESTFIELD – After the completion of the fall regular season, Westfield State has the lead in the first round of the Howard C. Smith Cup standings. The Smith Cup is awarded annually to the member institution which compiles the most points based on the placement of each of its programs competing in the 15 league championship sports.
The Smith Cup is named in honor of former Massachusetts State College Trustee Howard C. Smith, who in 1970, urged the athletic directors of the eight State institutions to hold a series of meetings to discuss the possibility of forming an intercollegiate conference. In June of 1971, Smith’s dream became a reality as an affirmative agreement was reached and the MASCAC was created.
Westfield State took home 59 points (77.63 percent) out of 76 possible points. The Owls finished first in men’s soccer and women’s cross country while finishing in the second spot in field hockey, men’s cross country and women’s soccer.
Coming in second is Bridgewater State with 51 points (67.11 percent) out of 76 points available. The Bears were the top MASCAC finishers in field hockey and second in women’s cross country.
Framingham State is next in third with 49.67 points (65.35 percent) of 76 points. The Rams claimed the MASCAC regular season crown in football and tied for first in the volleyball regular season standings.
Worcester State lands in the fourth spot with 40.17 points (52.85 percent) of 76 possible points. The Lancers ended the fall as the women’s soccer regular season champions and third in both men’s soccer and women’s cross country.
Fitchburg State finished the fall season with 33.17 points (51.82 percent) out of 64 points available, good enough for fifth. The Falcons took home the top spot in men’s cross country and finished second in football. MCLA lands in the sixth spot with 23.50 points (45.19 percent) out of 52 possible. The Trailblazers nabbed a share of the volleyball regular season title and finished in a tie for third in men’s soccer.
Rounding out the Fall Howard C. Smith Cup standings are Massachusetts Maritime and Salem State in seventh and eighth, respectively. The Buccaneers had 20 points (31.25 percent) out of 64 possible. The Buccaneers were fourth in football and men’s cross country at the end of the regular season. Salem State finished with 11.50 points (23.96 percent) out of 48 available points. The Vikings were fifth at the end of the regular season in women’s soccer and volleyball.
Westfield is defending the Smith Cup title after winning in 2014-15. The Owls have won five of the last 10 Smith Cups. – Courtesy of Westfield State University Sports