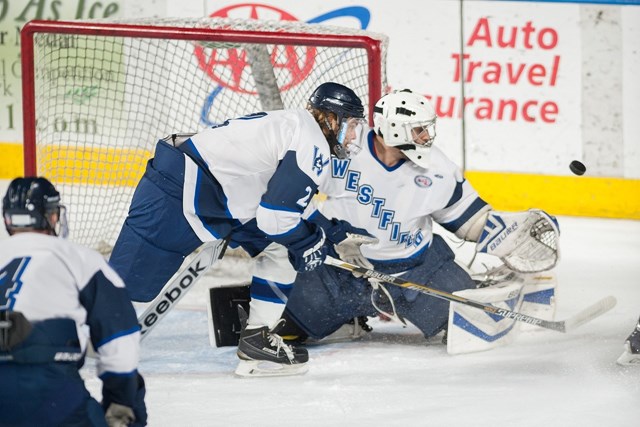 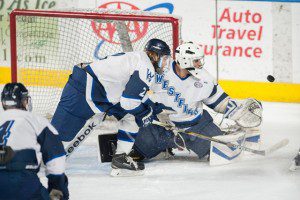 SPRINGFIELD – Westfield State got a pair of goals apiece from Dalton Jay and Jackson Leef as the Owls rallied past Western New England by a 6-2 score to retain the Falcon Cup, in the annual trophy game between the two schools in the season lid lifter for both ice hockey teams at the MassMutual Center on Friday afternoon.
Westfield, now 1-0 this season, won the Falcon Cup for the seventh time in eight tries, and its second consecutive cup. The Owls also won the first five games in the annual cup series.
Western New England grabbed a 1-0 lead just 2:58 into the contest on a goal from Steve Beck. The Owls answered five minutes later as Jay picked up a loose puck near his own blue line and went the length of the ice, slipping a shot past Golden Bears netminder Cole Semchak on the forehand side, and the two teams went to the dressing room at the first intermission with the score tied at 1-1.
The Golden Bears retook the lead early in the second period as Brian Hurley fed the puck up the left side to an unmarked Chris Lembo who fired a quick wrister past Owls goaltender Jonathan LoParco.
The Owls finally garnered their momentum midway through the second period. Westfield tied the game at 2-2 using good passing as Cory Wilson fed Jeremy Young in the slot after Colby Daniels had dug the puck out in the corner.
Westfield took the lead for good at the 18:03 mark on a nifty move as freshman Mason Wade dropped the puck at the blue line for Cody Campbell-Rich who blasted a shot that gave Westfield a 3-2 lead after two periods.
The Owls tacked on three more goals in the third period with Leef sandwiching a pair of goals around Jay’s second marker of the day.
LoParco stopped 32 shots in earning the win on net, while Semchak stopped 34 shots before yielding to Austin Keiser late in the game. Keiser made five saves in his short stint in net.
The game, played at the MassMutual Center as the opening act to tonight’s game between the Springfield Falcons and the Rochester Americans was the first NCAA Division III game in the nation to drop the puck this year, starting an hour and a half before any of their fellow competitors at that level.
Westfield State will be back in action on Thursday, hosting Salem State at Amelia Park in Westfield in a MASCAC conference game. WNEU will next travel to Worcester State on Thursday. 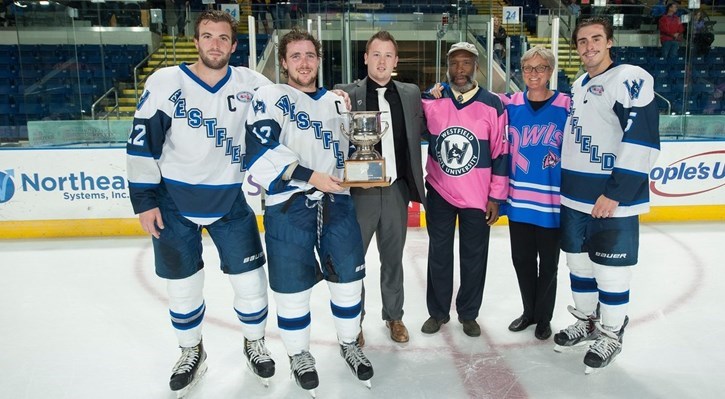