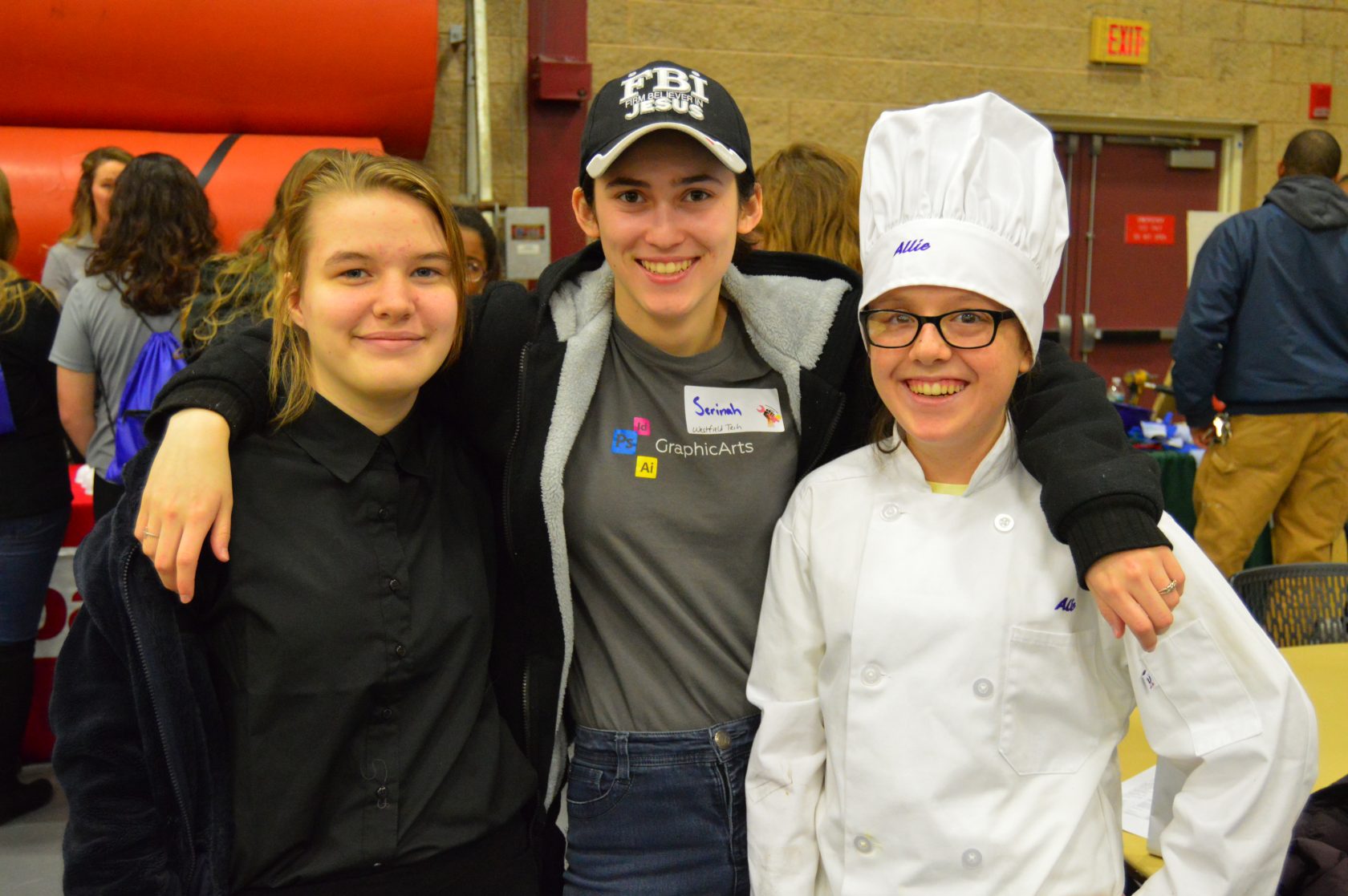 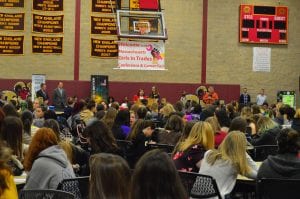 The full crowd being addressed at the beginning of the conference. (Photo by Peter Currier)

The event began at 9:30 a.m. and was attended by girls from 15 Massachusetts vocational schools and technical academies. It was designed to give high school aged girls an idea of what life is like to pursue a trade rather than an office job or STEM career when they are older. The girls from Westfield Technical Academy (WTA) were mostly Freshman, but there were two Seniors in attendance as well.

The program was split into two main sections. The schools were divided into two groups who each attended a workshop on becoming a union tradeswoman, and a career fair in which local trade companies and unions were present. At the workshop, which WTA attended first, a group of women with a range of ages and an even bigger range of trades were present to talk about their jobs and histories. They were welders, construction workers, line workers, and electricians, among other professions. 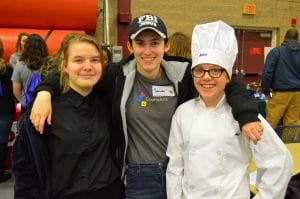 (Left to right) Freshman Sarah Reed, Senior Serinah Ruiz, and Freshman Allie Guarenti of Westfield Technical Academy. Reed and Guarenti are in the culinary arts program while Ruiz is in the graphic arts program at WTA. (Photo by Peter Currier)

“Our goal for today is to say, what is an apprenticeship? What is a union?  How does this work?  How do I apply? Is this a good fit? Is this not a good fit?” said Liz Skidmore, member of the New England Regional Council of Carpenters, “So you can walk out with a little more information and some of the nuts and bolts.”

Skidmore was the moderator for the workshop and offered advice to the girls on how to succeed in industries primarily occupied by men. The other women, who each work their own trade jobs, spoke about the pro’s of working a trade. Among the positives was the average pay and benefits offered in most trades. On average, according to their presentation, a trade worker in an apprenticeship makes a minimum of $17.00 an hour, and they do not have to pay for college to be qualified for the job. The women also spoke about what a union actually is, and what it means to be an apprentice.

“I have four brothers. Three of them are in the union and my dad is in the union, and that is not really what I thought I wanted to do,” Said Justine, a member of the Local 98 Union, who did not give her last name, “Then I had a daughter, and I did not want to work on the Fourth of July. I didn’t want to work on holidays, I wanted to go to the parade with her. That’s what made me join the apprenticeship union. Since then, it’s been a perfect fit for me.”

The students from WTA and the other schools that were present are studying different areas of trades and specialized professions. There are students studying automotive technology, electrical wiring, construction, horticulture, and culinary arts, to name a few. Their day to day learning is not the same as a traditional public high school, rather, they spend more time learning the intricacies of their preferred trades.

While the students were in the workshop, the educators that chaperoned them attended their own workshop to learn how to better serve the women trying to work in trades.

“There was a lot of discussion on the current statistics on the number of students in skilled trades, and how many are girls,” said WTA Principal Joseph Lagone, “We set a goal for 20% female enrollment by 2020.” 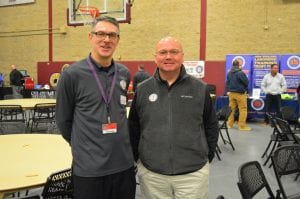 Following the workshops, the two groups of students switched places, and the WTA girls went to the building’s gymnasium for the career fair. The companies and unions that were present included Columbia Gas of Massachusetts, Eversource Energy, Milwaukee Tools, the Plumbers and Pipefitters local 104 Union, the Iron Workers Union, and the Builders Union. Including those, there were dozens of organizations for the girls to interact and network with.

After an hour of being allowed to mingle with the company representatives, the students were given a lunch, and then a set of speakers stepped up to the podium. The first speaker was the Massachusetts Labor and Workforce Development Secretary, Rosalin Acosta. She spoke about the opportunities the girls in the room had that were not available to her, or other women growing up.

“When I was growing up, we didn’t see a lot of girls in power. Girls weren’t encouraged to play sport or do any of the exploration that you are doing here today,” said Acosta, “So it pleases me to no end to see that you’re looking at a different path, and you’re looking at a path that not only will make you a heck of a lot of money, but also that has a really promising future for you and plenty of opportunities.”

Following Acosta was a speech by Massachusetts Lieutenant Governor, Karyn Polito. She talked about the possibilities the students have in their future and how they are putting themselves in a position where their opportunities are limitless in their communities. 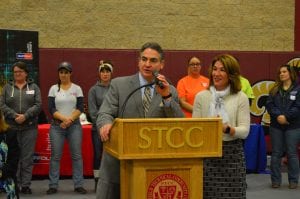 “My call to action today is for you to stay here in this great Commonwealth of Massachusetts. We need you to lay your roots even deeper in the community in which you have ties,” said Polito, “Wherever it is that you are growing up or where your family is, the fact that you can then bring it home, literally. Take your talent, take your job, bring it home, and then start your family, and build on the success of those that have come before you in this commonwealth. But then give back to a place that is offering you so much.”

The final speaker was Springfield Mayor Dominic Sarno, who discussed the range of opportunities that women now have in trades and other fields.