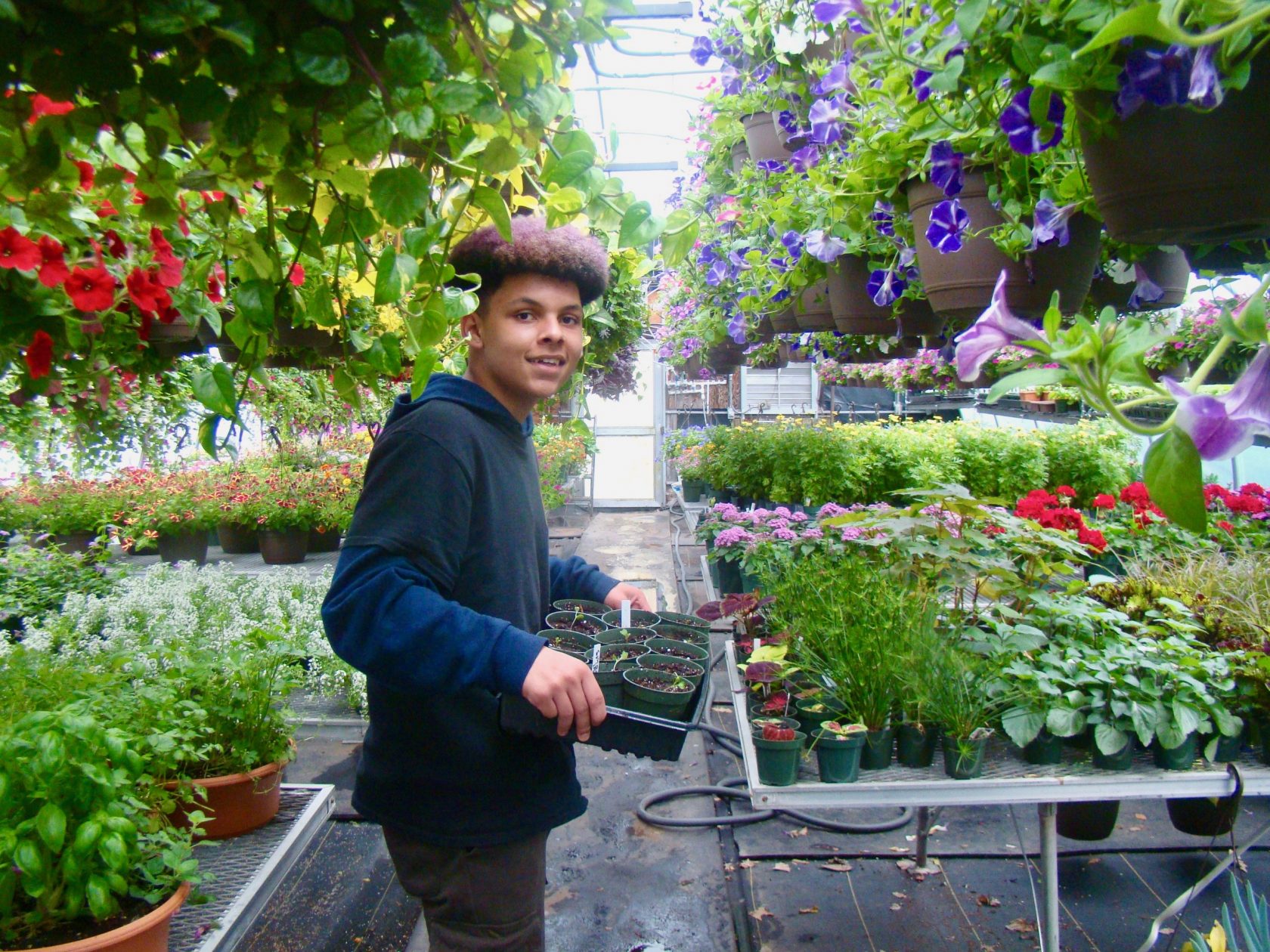 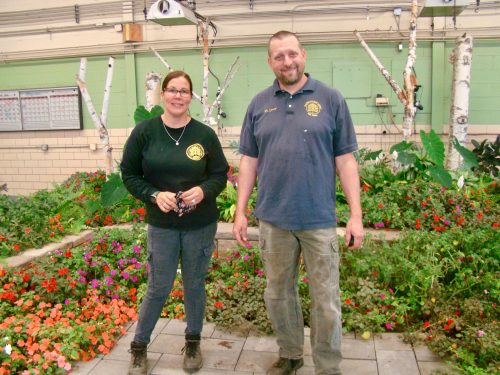 Customers should use the Greylock Street entrance and look for the signs.

For sale will be flowering hanging baskets, deck planters, potted annuals with a few perennials, herbs and herb bowls and vegetable starts such as tomatoes, peppers, squash and cucumbers. Sperry said that people may also bring in their own window boxes or other planters, and the shop will plant them for you. 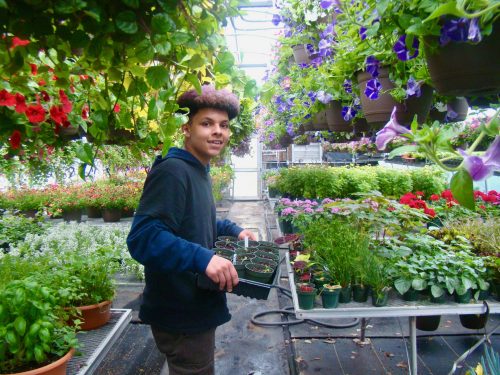 The goal for the sale is to raise $15,000 for Horticulture Technology. “Half of that goes into the supplies for next year’s sale. We’ve been considering an additional greenhouse space with the profit,” Sperry said. Last year, which was somewhat smaller due to COVID, the plant sale sold out on the first day.

While he runs the offsite work crews, Sperry said that new horticulture instructor Vicki Toro did a lot of the work on the plant sale this year. Toro started at WTA three weeks before the shutdown in 2020, and has taught horticulture for twelve years, coming over from Putnam Vocational in Springfield. Also added to the staff was horticulture assistant Debra Hamm.

Toro said now that she and Hamm are there, they can plant more “We have more hands working on it,” she said. 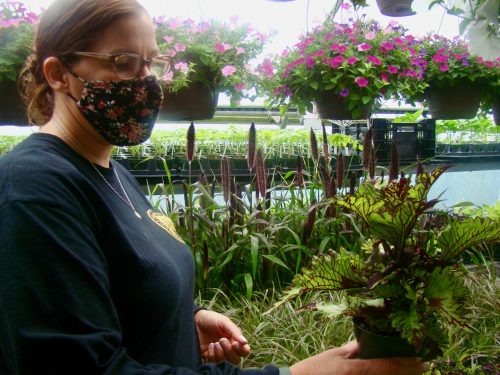 Toro said the tech department grew everything in the greenhouse from plugs, cuttings or seed. She said plants that need longer daylight were started from plugs grown by farmers with a longer growing season. The department started vegetables and some flowers, such as marigolds, from seed.

Freshman Quentin Broxton-Kohler, who was bringing in new seed starts, called the greenhouse “very calming and very nice.” He said studying horticulture was a lot different than he expected it to be, referring to the range of the work, from planting plants, to moving things, to yardwork.

Toro admitted the plant sale was “a lot of work. It’s an amazing experience, especially for the freshmen. It’s the first time they see plants from the beginning to the end, and also, how much people appreciate plants.” 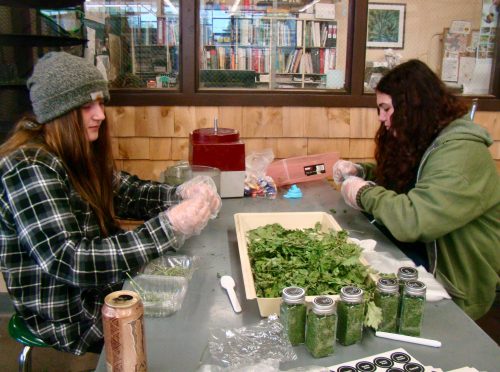 Prices for the plant sale remain predominantly the same, but went up on a few items that were dramatically behind the industry. Hanging baskets had been $15 for years, and were increased to $17. Toro said they have 400 hanging planters to sell this year.

Also new this year is a mini farmer’s market station, where boxed up tomatoes grown in the hydroponic greenhouse, kale and arugula, and dried and cut up herbs will be for sale. Sophomores and juniors will be doing the selling.

Freshmen Hailey Shay and Koda Jacque April 29 were working on taking dried parsley that was grown from seed in the hydroponic greenhouse, chopping it in a blender, and bottling it for the mini farmer’s market.

“I like the plants, landscaping aspect and heavy machinery,” said Shay about the horticulture department.

Jacque said she likes the nursery and the greenhouse. ”I can’t retain as much as we’re learning,” she said. 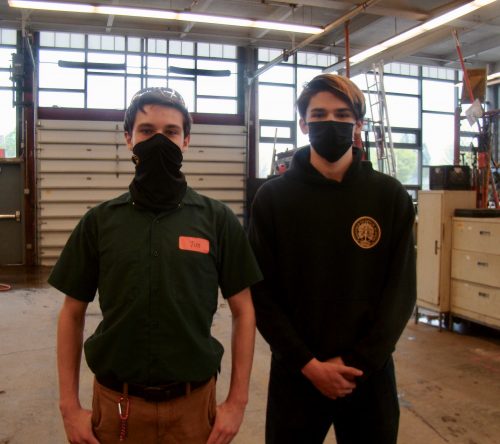 Seniors Tim Nacewicz and Devon Weeks were putting together the poles to hang plants on for the sale. (AMY PORTER/THE WESTFIELD NEWS)

Toro said kids signing up for horticulture are often drawn to be able to work on the heavy equipment, and like the offsite work.

Seniors Tim Nacewicz and Devon Weeks were putting together the poles to hang plants on for the sale, and Nacewicz agreed. “I hope to apply for the Operating Engineers Union, to do construction work operating bulldozers and tower cranes, and also landscape construction,” he said. He’s applied to the Southwick Department of Public Works for a position.

Weeks said while he is not certain of his plans, he wouldn’t mind pursuing the plant side, and plant identification.

One of the outside jobs the department has been doing was also on display. The city has contracted with Horticulture Technology this year to create 18 planters for the `Green Bridges.’ The planters will go out closer to Memorial Day, after all danger of frost is past. 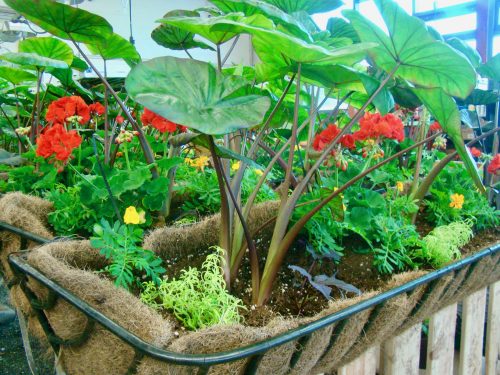 The city contracted with Horticulture Tech this year to create 18 planters for the Green Bridges. (AMY PORTER/THE WESTFIELD NEWS)

“We’re excited to have that ownership for the kids,” Toro said, adding that they will be reminded of their work every time they cross the bridges.